The Northern Neck--land of conservatives and mega-churches—is kind to boaters. The tiny town of Deltaville sticks out into Chesapeake Bay on a slim peninsula. There is a grocery store, a Dollar General, a West Marine boating supply store, and a dozen marinas and boatyards. Not much entertainment if you’re not a TV fan.


Pope and the advance crew (his brother and a friend) holed up on a dock at the Deltaville Yacht Club, where I met them with the car, coming aboard for a 36-degree night huddled in jackets and sleeping bags. The crew had endured a gusty, miserably cold race down Chesapeake Bay in 30-knot gusts and temperatures in the 40s. The boat flew down the bay at 7 knots—unheard of for our heavily laden, wide-beamed boat. After all, we have 1/10 of our worldly possessions aboard! As I mentioned in an earlier blog, in order to overcome homesickness, I brought more than my share of creature comforts along—to Pope’s chagrin:


* My favorite frying pan. Here I am, tied up in Deltaville, making French toast on an electric hot plate. I LOVE docks with electricity. 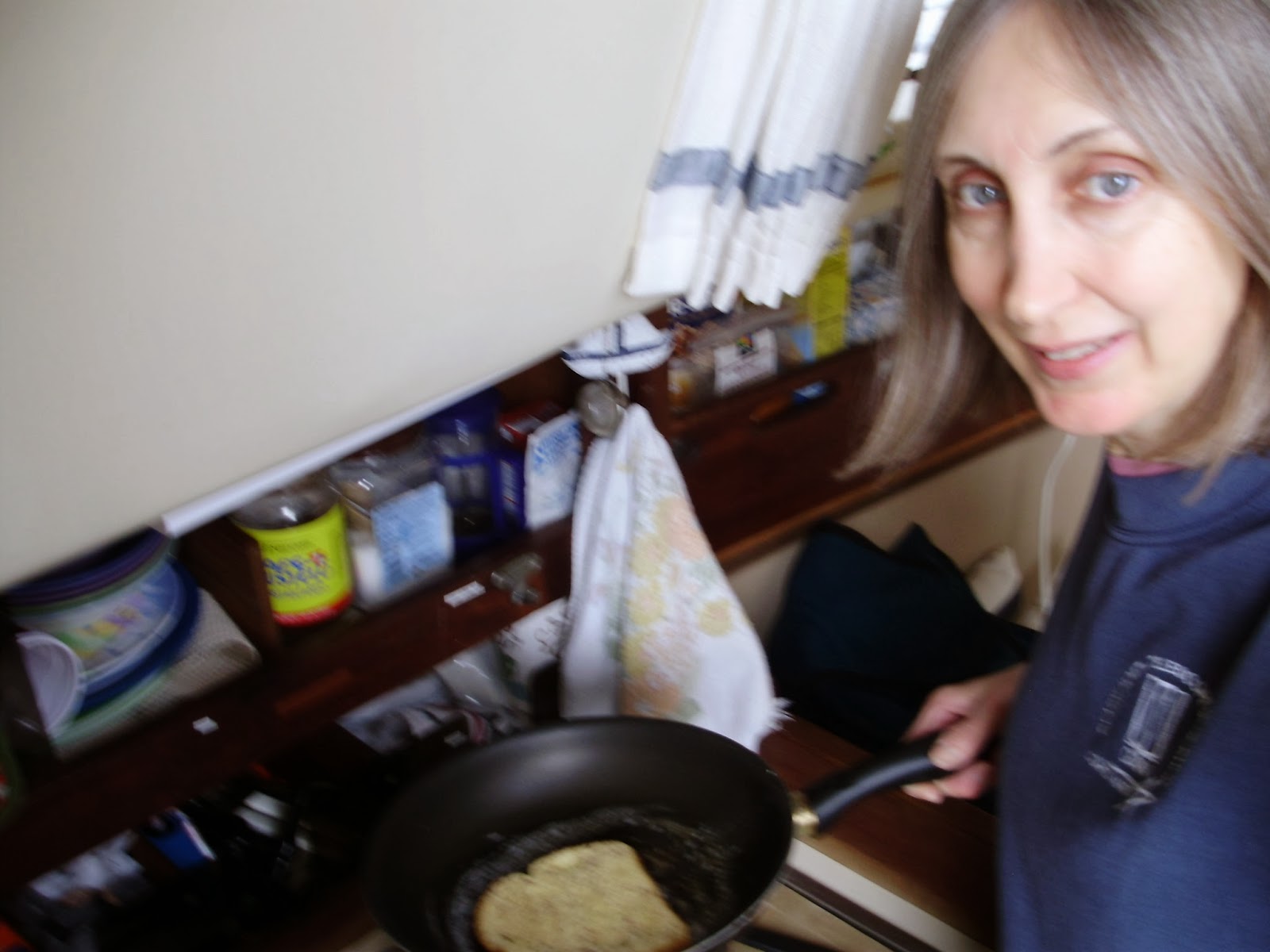 
* Netbook for writing and blogging. 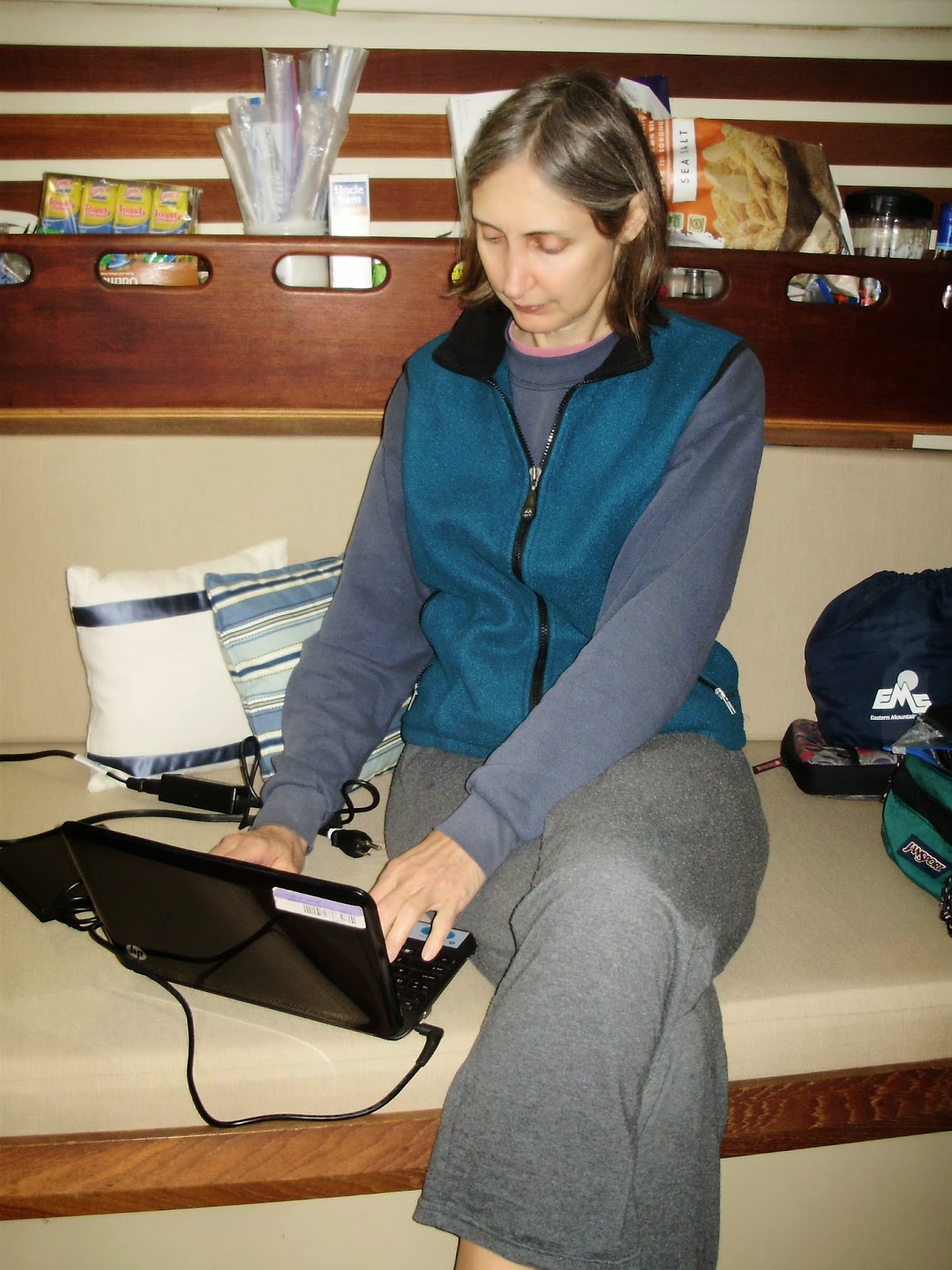 * CDs of my favorite musicians.


* Rum, quinoa, and of course, chocolates (a farewell gift from my good friend Lisa). 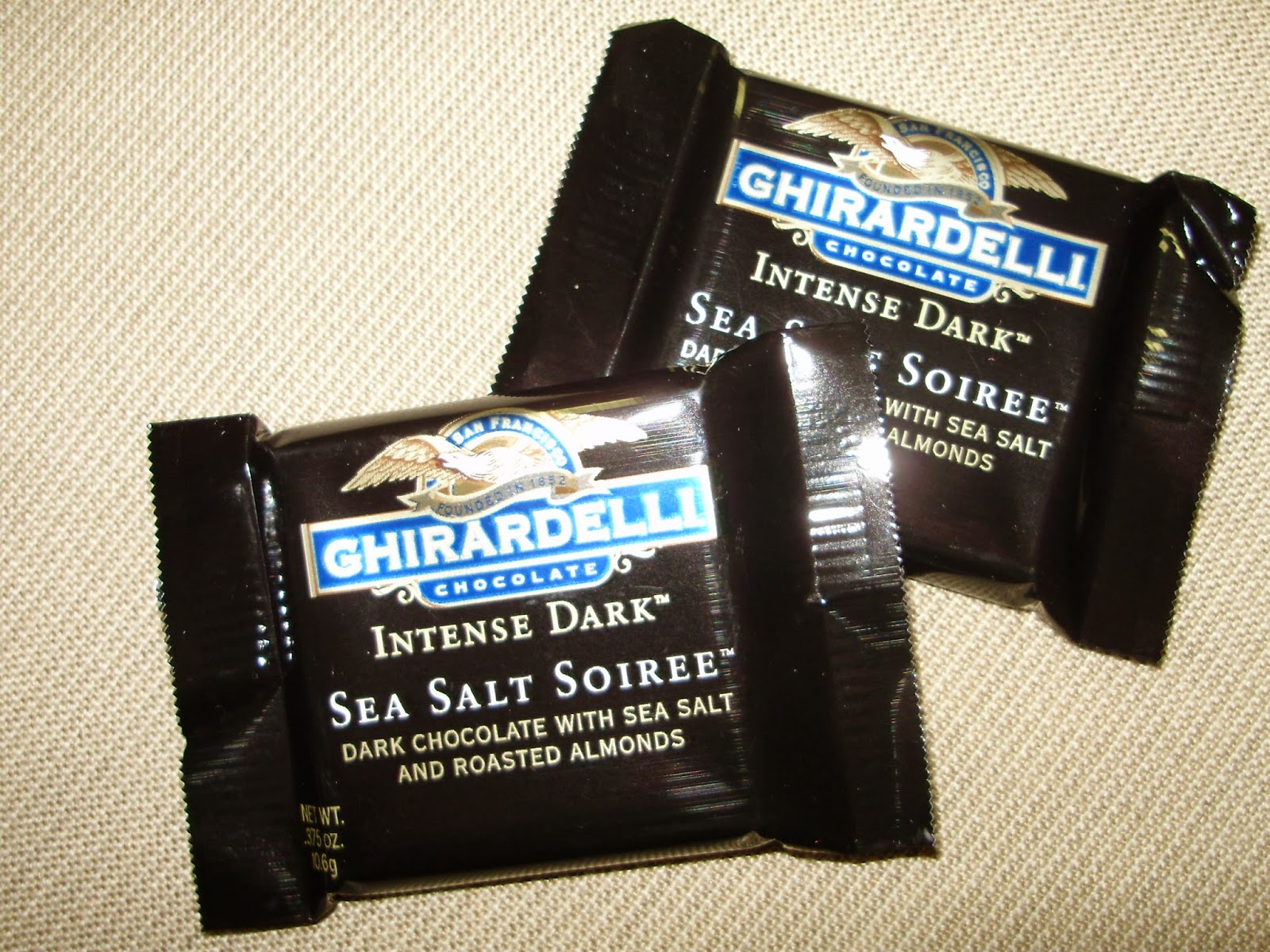 The bay had taken its toll on our jib (the front sail), leaving some major rips and tears. My first morning on the boat, as the advance crew headed back to DC with the car, Pope and I bundled the sail into town to a local sailmaker, who patched it up for under $200. A bargain! And lucky to find him! Of course, that is only the start of a long string of expenses for repair and maintenance. We can’t afford to be naïve about how much this trip is going to cost. Whip out the wallet at every opportunity. Here is Pope re-installing the jib on the roller furling. it's a big sail. 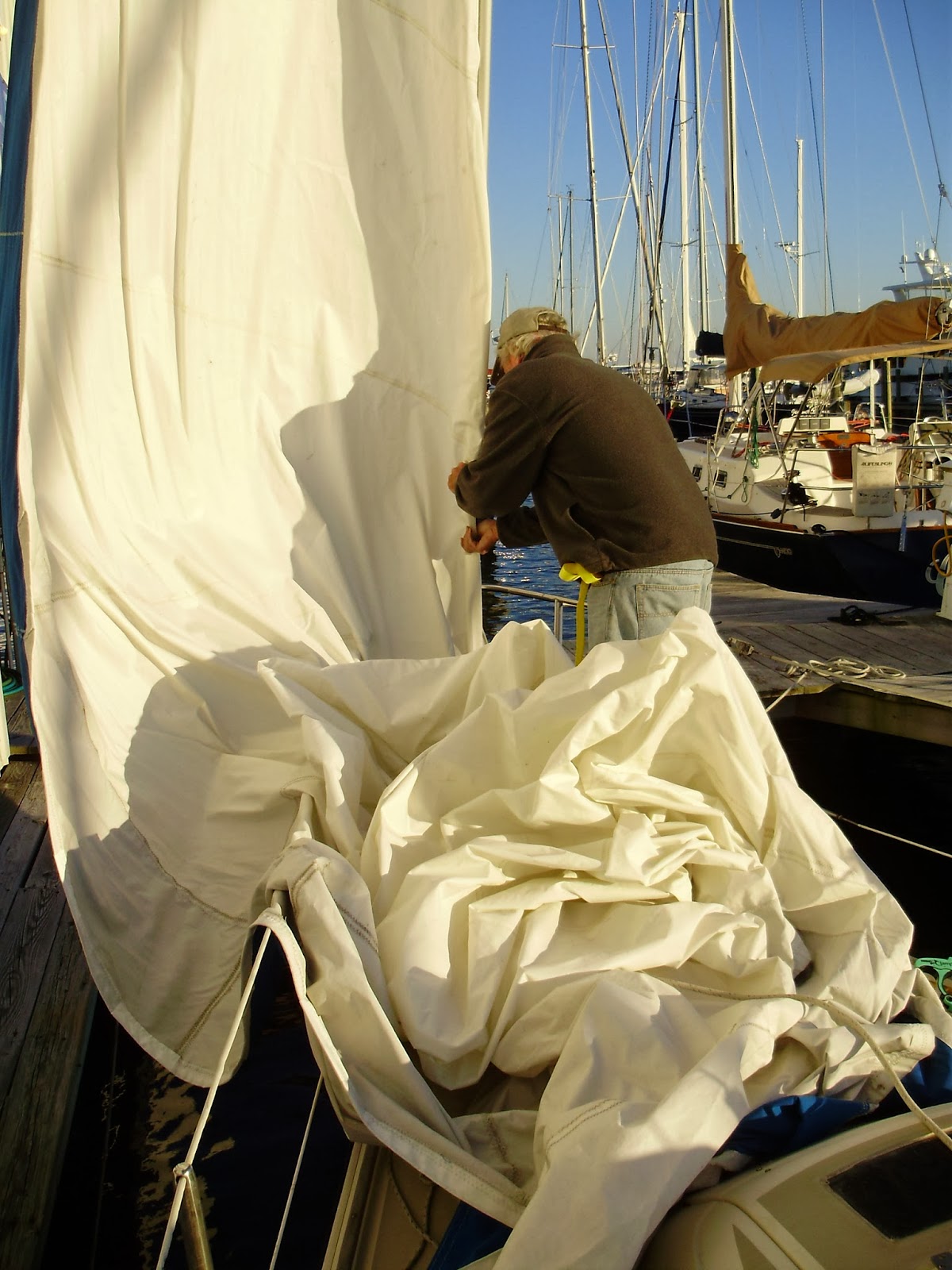 Having taken advantage of the generous (free) hospitality of the yacht club for one night, we felt obligated to move to a real marina for a second night in Deltaville--expensive at $1.75 per foot of boat. However, the showers were pristine, and included hair dryers! Bikes were included! I took several rides into town for provisions and for fun. The marina had a boaters’ lounge with internet, a book exchange and sailors sharing stories about the Exuma Islands, where we are headed! Recycling bins! And...a lettuce and herb garden for the boaters!! I highly recommend the Deltaville Marina at Jackson Creek. 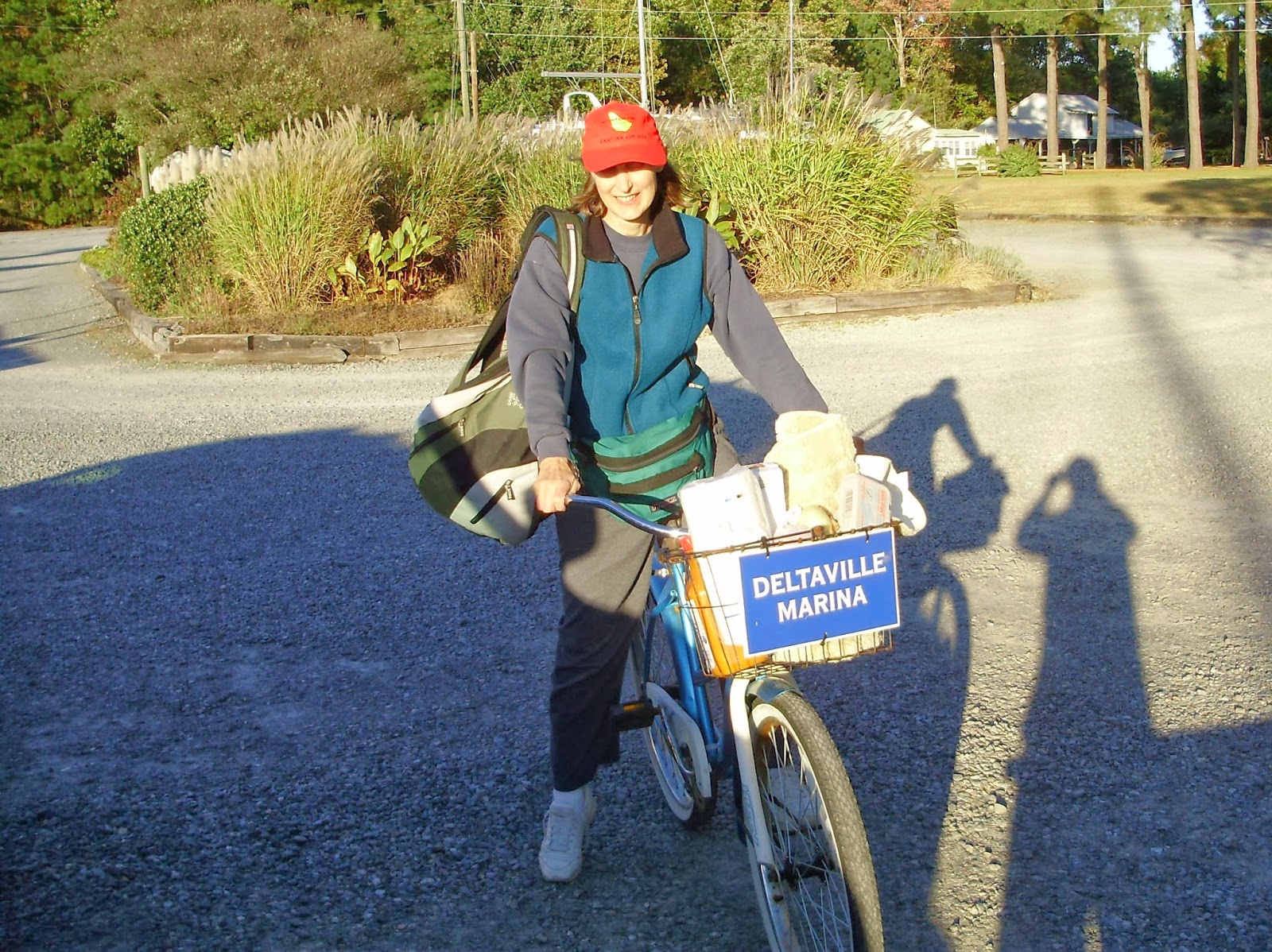 We reluctantly moved on to Hampton, tying up at the Public Pier, and again staying two nights while Pope tried to fix the fuel guage (which still showed full after 58 hours of motoring) and installed a water intake filter to prevent duckweed in the Great Dismal Swamp from clogging our engine. I borrowed a bicycle and headed for the market for eggs and apples to supplement the rum and chocolate. 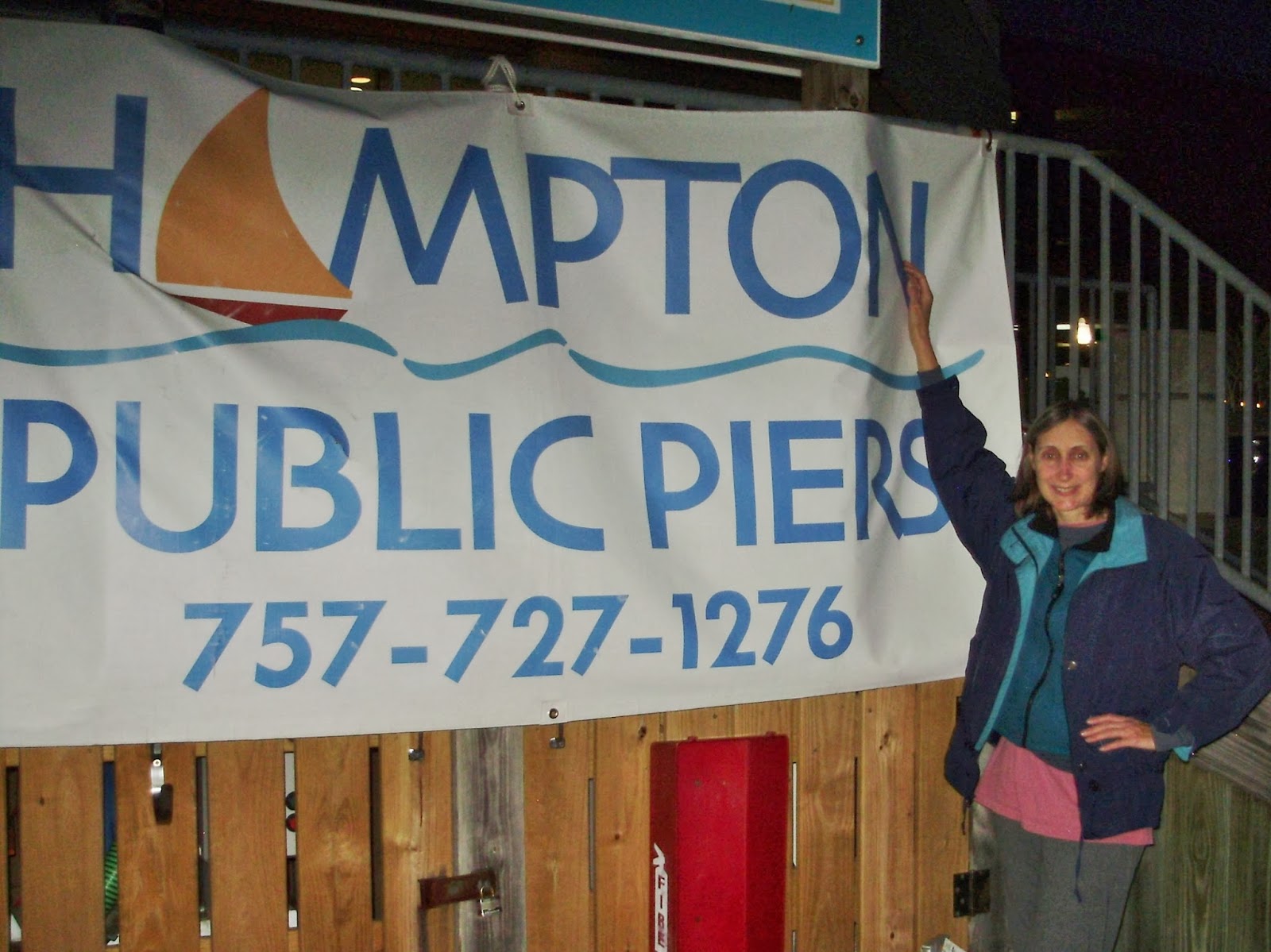 This is getting to be a habit—staying two nights in one place. I do enjoy the leisurely pace. It almost feels like retirement!  I like sitting still at marinas and docks and having electricity and showers.  And it's easier to get repairs accomplished when you can grab a courtesy bike and head over to the hardware store.


Today, we leave civilization and move into the wilderness, starting our traverse of the Great Dismal Swamp canal. I don't expect to get Internet for a couple of days.
Posted by my alias Amber Jones Adventures at 6:37 AM