How High Are the Mountains? How About 'Dem Ocean Swells???

How deep is the ocean? How high is the sky?


These are eons-old questions, immortalized in literature and song. Well, here’s a new profound, probing question to addle your gray matter: how tall were the huge, mountainous waves we endured in the Northeast Providence Channel on Monday?


Just like the Alps and Rockies, oceans, too, have peaks and valleys, not just on the seabed, but also on the surface! Heavy boats—cruise ships or container ships, for example--plow through most ocean waves with nary a lean, let alone a tumble. Echo II, in contrast, is a tiny baby rocking in a cradle with loose hinges.


On Monday we accomplished an amazing feat: crossing 52 miles of the Atlantic in a single day, starting well before sunrise. 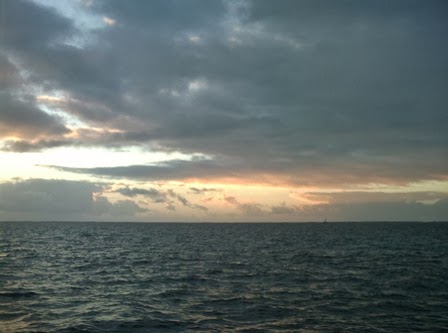 Fifty-two miles might not sound far to the average automobile driver, or cruise ship captain, but for sailors rolling up and down swells at the mercy of the sea gods, the day seemed endless and the distance twice that far.


The waves were on our beam. “Roly-poly” is how cruisers describe the phenomenon of tipping and slipping sideways, or “beam to beam.” (I heard it on the radio.) Occasionally, we also rocked front to back. I don’t know what that’s called.


So, just how far did we travel? Despite the 52 miles clearly marked in magenta on our nautical chart, the actual distance traversed, factoring in the distance we climbed up every peak (or should I say borne up by a relentless ocean with little discretion on our part) and slid down into each valley, is a matter of dispute. Having experienced my first major blue-water sailing in the Pacific last summer, off Vancouver Island, I feel I have some experience at this sort of thing. I swore that the waves on Monday were 10 feet tall, from crest to trough.


Pope had a different perspective. Those measly waves were only 3-4 feet, he scoffed. He has much more ocean sailing experience, of course.  However, my eyes don’t lie. When we slid to the bottom, I could have sworn the top of the next swell was up to my eyebrows. 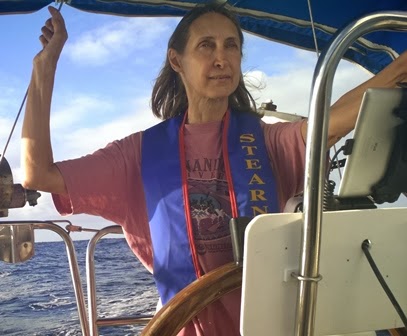 We wrestled with the data, and tossed invectives back and forth, both swearing on the seaman’s Bible that our version was the most accurate. Or at least the most interesting to share with other cruisers at happy hour.


Time to call in a mediator to settle the dispute and get our stories on the same page. At our anchorage west of Lynyard Cay, in the southern Abacos, Carmen and Bill of the neighboring sailboat Jela obliged. We had met them earlier, in Spanish Wells. A happy couple. 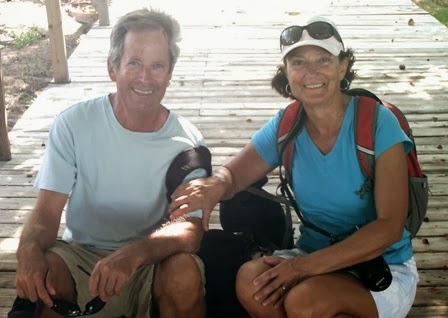 They motored over in their dinghy, wisely dragging along some cold beers to help cool things down. (Jela has refrigeration.)


How high were those swells that added so cruelly to our total distance?


“Huh,” I replied, not quite willing to give up my story of giant rogue waves tossing us in the air and plunging us toward the 4,700-meter depths (almost 15,000 feet!).


“Hmm,“ Pope pondered with a frown, clearly not sure if his manhood was being threatened or if this woman had some genuine expertise in marine measurement science.


What was her source? Why was she so sure? We badgered her to tell all.


“I listened to today’s marine weather report on the radio.”


Oh, well. Whatever the size of the rollers, with the wind filling both sails, we were able to run at more than 6 knots all day. Above-average speed for Echo II, especially in roly-poly conditions. The faster pace allowed us to keep several bigger sailboats, including Jela, within sight on the horizon all day, making a huge difference in my comfort level.  (See previous blog about the time I cried when the last boat disappeared over the horizon.) 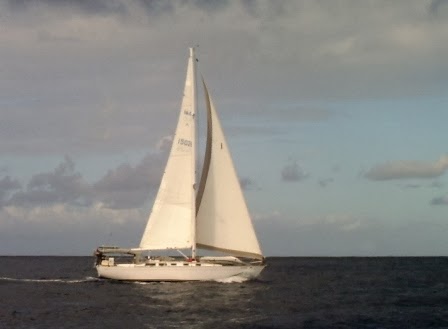 Jela
On Monday, I could see sails every time we crested a wave, and I knew the crews would come to our rescue if the sea gods won the battle for our stomachs and our souls. For once on this Bahamas cruise, we weren’t battling those humongously high peaks all alone!

The silver flying fish take it all in stride. They sail above the waves for long distances, occasionally dropping down to flick the water with their little tail fin to give them more momentum--kind of like Oracle riding on its foil in the America Cup. 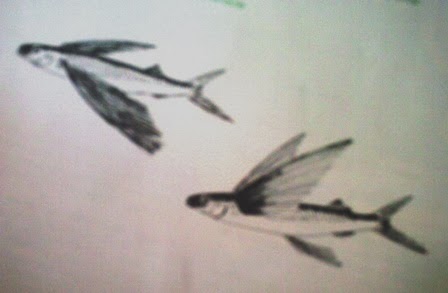 Posted by my alias Amber Jones Adventures at 12:08 PM