Where in the World is Amber Now?

Dear readers: I've been gradually checking off items on my retirement "TO DO" list. You know about wintering in the Bahamas. I took French classes, voice lessons, and music camp--all on my bucket list. (The trip to France is still in the works, but deferred until 2015.)

Not all of my endeavors have been equally successful.

Music camp was a blast, and I'm now geared up to sing cajun songs in public (next event: August 27 at New Deal Cafe). My folk song meet-up is a lot of fun. I practice my guitar every day, and pick up the harmonica now and then. 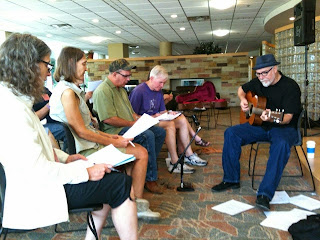 I joined Results Gym down the street on Capitol Hill, and do a lot of walking and biking around town.

However, the French classes were a disaster. Though I spoke it fairly well in earlier decades, after years of lessons and multiple trips to Paris, my brain seems to have switched off to re-learning a foreign language.

The group voice class didn't work, either: I hit the right notes and learned some Broadway tunes, but haven't mastered the diaphragmic-breathing techniques. I need individual attention and coaching. 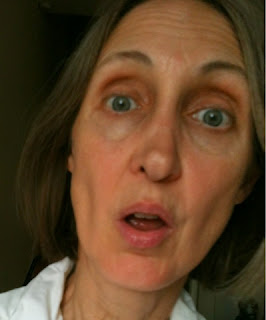 Straining to hit the high notes at the end of "Where or When" by Rodgers and Hart; the teacher told us that raising the eyebrows helps!

So, given my current state of mind--somewhat discouraged and taken aback by my failure to master every single darn thing I set my mind to (yes, it's that perfectionist personality trait)--I have decided to return to a tried-and-true activity for a while, to give the gray cells a rest. And remove myself from our constantly messy house.

I leave on Megabus tomorrow for Joy's Marina in Hampton, Virginia, to join Pope on Echo II, our trusty good ol' boat. We will resume sailing it northward toward its home in Edgewater, Maryland, on the western shore of Chesapeake Bay. Having already traversed more than 1,000 miles from Florida to Virginia on the Intracoastal Waterway, this is the home stretch. 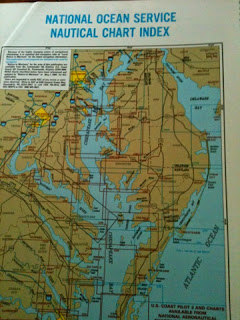 Of course, we have to get some boat repairs done first. But you guessed that, didn't you?!

Posted by my alias Amber Jones Adventures at 11:31 AM