Three Mechanics in Three Days: Lady Luck Turns Her Back

On Friday the sky clouded--literally AND figuratively. We had spent a lovely evening on our beautiful new charter boat, except for one thing. The GPS, essential to navigation, had problems. One more gentle plea to the mostly-agreeable marina staff: help!

Help was promised in the form of a Raymarine repairman, motoring 30 miles down from Belfast the following morning to Pulpit Harbor, the picturesque cove where we spent a peaceful night. After two reprieves in two days from potential calamities, I held my breath as we awaited his arrival. Was my good fortune destined to continue for one more day? Would Lady Luck stay at my side?

No. She turned her back and walked away.

For four hours Friday morning, we scanned the mouth of the harbor for a vessel speeding our way, waving from our bow to every boat that passed within 500 yards, just in case he was aboard. But they were all lobster boats.

Meanwhile, we noticed the boat batteries seemed to be discharging. Decided to start the engine and charge them up. Uh oh! Starting battery was dead! And just enough juice left in the house battery to start the engine. (Sailors will understand why this induced a certain amount of anxiety in our crew.) Yikes. Could this be true -- TWO electrical problems on our beautiful new charter boat? Was I being abandoned by Lady Luck? 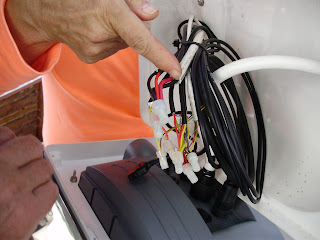 Oh, what are these for? Trying to diagnose the problem by ourselves--ha ha!

Finally, a small motorboat passed in the distance, turned and doubled back. Hallelujah!

"If you hadn't waved, I would have passed right on by," said our new best friend, Kim the repairman. We were very, very happy to see Kim. He methodically worked his way through our electrical system, fixing a blown fuse and broken connection to the GPS, and then tracing our battery problem to a bilge pump that was stuck "on," apparently drawing down the battery power. 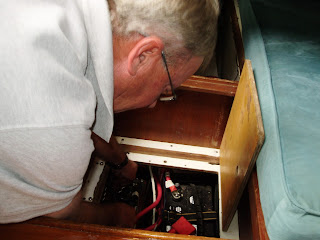 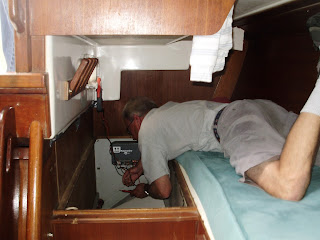 Mechanic #1, Kim, tracing the wiring into hidden corners (that's the quarter berth bunk Pope and I are sleeping on, by the way--tight quarters; don't hit your head!)

What a relief. This seemed to be my third lucky break in three days--a licensed and skilled electrician who knew his way around a vessel. He had worked on America's Cup boats! By late afternoon, we were confident our problems were over. Kim was confident--good to go in the morning. To celebrate--and compensate for missing a day of sailing--we hailed the nearby lobster boats and tracked down some soft-shelled lobster for the hungry and frustrated crew. 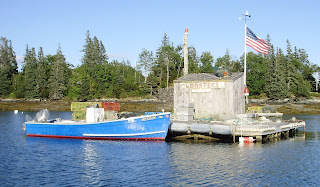 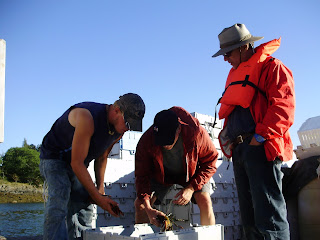 Lobstermen deliver their catch first to "floats," or rafts, where they store equipment and measure and divide the day's allotment 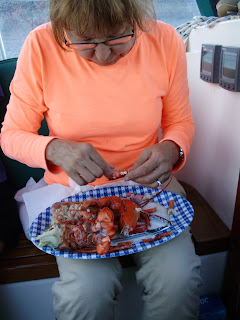 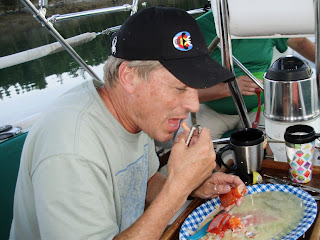 Alas, we had celebrated too soon. Next morning, the engine didn't start. Something was clearly defunct. We were still stuck in Pulpit Harbor, though we tried to look on the bright side--another sunset in a beautiful place, on our beautiful boat. My good fortune had not completely abandoned me. Yet. 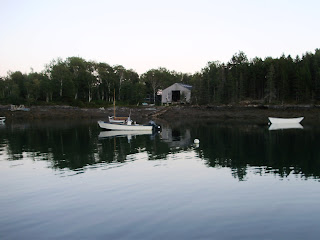 Another call needed to our home marina: send help! However, Pulpit Harbor is off the beaten path from radio towers. Not easy to get service on our Colorado-and-Washington-based cell phones out there in the wilds of lobster country. 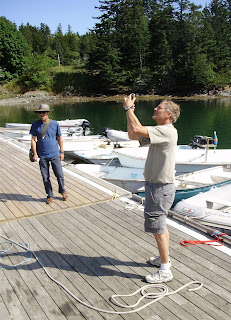 Larry seeking a cell tower while our skipper, Dave, despairs over the missed days of sailing, the difficulty of making a phone call, and all the mechanics on board!

This time, our savior was a local lobster-boat mechanic named Foy. True to his reputation as the skipper of a frequently-broken-down old boat, Pope was clearly living up to his pattern of getting to know all the local mechanics wherever he goes sailing. 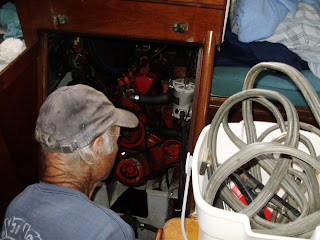 Mechanic #2, Foy: Hmm, where oh where do I look to solve this latest problem?

Foy jumped the battery and gave us his dire prognosis: probably a defunct alternator. He loaned us a jumper battery, which would give us a good shot at starting the engine--once. Get to a full-service marina, he advised. Meanwhile, on HIS cell phone, he transmitted a precise and thorough description to his friends at the local alternator-parts stores: "Um, It seems to be one of those German or Swedish ones; it's smaller than other alternators, and has a bunch more wires on it." (Note: I am NOT making this up; I wrote it down.) 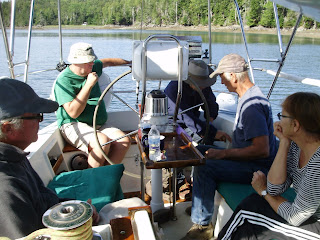 Foy delivers his sad news to skipper Dave and the crew

And thus we moved the boat to a bigger town, seeking to find Foy's alternator-parts friends. We made it to Journey's End Marina in Rockland, Maine; such a fitting name, yet how depressing! Why choose that name for a boatyard that aims to get you back on the water again? Hmm. We WERE already on Day 4 of our 10-day "sailing" adventure. 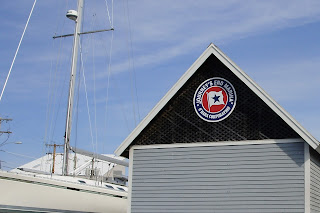 Here we are, at Journey's End...Marina, that is!

There we were, on Saturday afternoon of Labor Day weekend, still only 10 miles from our starting point, with mechanic #3 on board, holed up in a Rockland harbor that we barely reached, on a dead battery and with no alternator, with a jumper battery on board from #2 mechanic, who diagnosed the alternator, shortly after mechanic #1 fixed the GPS. On a holiday weekend in a region of small towns, marine parts stores were closed up tight.

Ed was a jolly mechanic, who sang along while Dave and I practiced Bob Dylan songs on our banjo and guitar. He did his best to jury-rig the alternator, but was unable to perform miracles on our maybe-German-or-Swedish alternator; we are stuck in Rockland until Tuesday when the shops re-open. 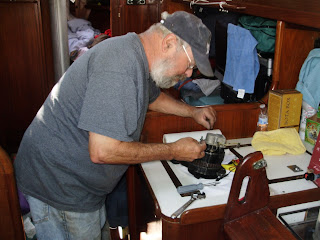 Mechanic #3, Ed, tried his best to get us back on the water today!

Our fortune has degenerated from good to mediocre, it's true. Lady Luck may have turned her back on us, but all is not lost! Rockland is a decent-sized tourist town with a homespun brewery and cafes serving up lobster, steamed clams, and mac 'n' cheese. 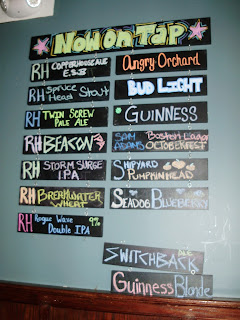 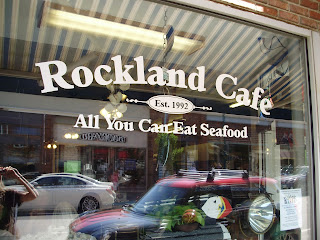 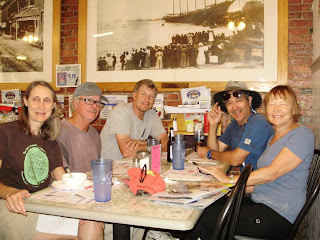 Best of all, it boasts lots of marine service shops that can bail us out of our fix two days from now, after Labor Day weekend. That will be Day 6 of our 10-day "sailing" adventure. Maybe our luck will turn again, like the ever-changing tides. You never know.

Meanwhile, we wait. We eat. We drink. We read. 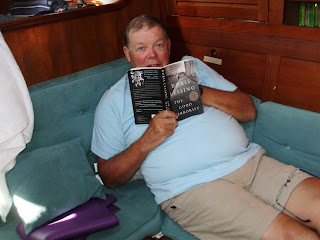 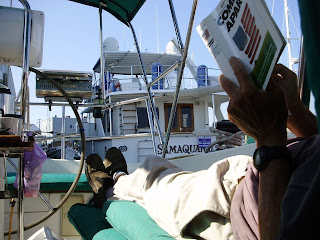 We explore the town. We eat and drink some more. Sometimes we drink too much and sing silly songs. The waiting can be excruciating! 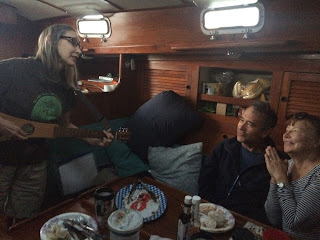 To kill time, entertain myself, and hopefully provide promising options for our anxious and despairing crew, I am combing the area, seeking other means of unusual yet potentially useful transportation to explore the coast of Maine. Stay tuned. 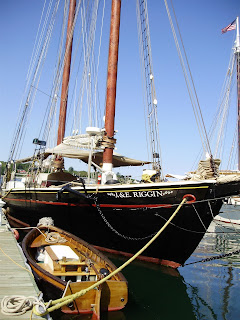 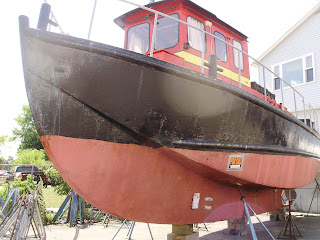 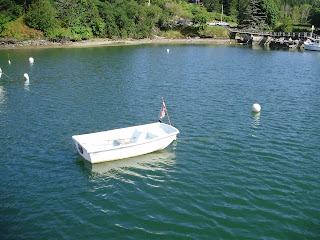 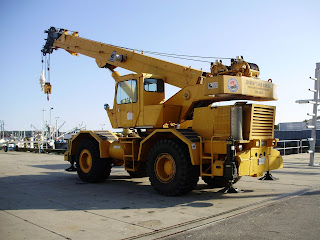 It can carry two crew members from point A to point B; with the rowboat pictured above, the two together can accommodate our whole crew!

Posted by my alias Amber Jones Adventures at 9:30 PM