On the Road Again--and In the Air, On My Way Back to School

My days of carrying a 40-pound backpack, sleeping on 50-cent cots (remember the song King of the Road?), and cramming my legs into Greyhound seats have gone the way of the New Zealand moa. No more. Extinct.

I left those mornings of soaking wet boots, bruised hips, and shared bunkrooms to a younger generation. I moved on to private rooms and a 25-inch, ultralight Samsonite spinner. For our three months in France, I dragged 40 pounds to the airport--but this time on wheels.

My first graduation! From community college to the university of the world, you could say. From youth to maturity. From Appalachian Outfitters to Samsonite. From Gore-Tex rain suit to folding umbrella.

I was so proud. I had money now.

Well, the 25-inch was somewhat of a disaster. It was a heavy lesson to learn. (Though it was nice to have all the gear I wanted--hat, gloves, mosquito net, body balm and four pairs of shoes.) I limped down the broken cobblestones of Sarlat-de-Caneda with a broken metatarsal (the reason for the shoes), dragging, lifting, cussing, stumbling as those tiny rotating wheels caught in cracks and spun the wrong way. I backed into train cars and reached down to haul up my ton of bricks. Standing at the top of a stairway in the Paris Metro, I knew: there had to be a middle ground.

So I got smart, moving along to graduate studies in how to travel light. Er, lighter, as Pope rightly pointed out. From C- to B, perhaps. My carry-on for New Zealand was 10 pounds heavier than his, and over the weight limit. After he fell asleep last night, I quietly tucked my paperbacks and travel log under his clothes. A self-respecting writer can't journey overseas for a month without a travel log!

He never knew the difference. I know, because we are on the plane and he is smiling. Even though I left him behind in the departure lounge, slyly slipping past the gate agent early, coat draped over the rollaboard--because I knew that, besides being over-weight, it was also over-sized! Not 25 inches, though. Only 22-1/2. 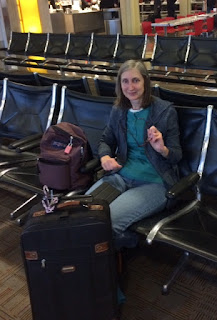 In the same manner, I coyly waltzed past the TSA with three--not one, not two, but three--clear plastic quart-sized plastic bags bulging with sunblock, prescription gels, a tiny tube of my favorite Nexus hair conditioner, and two fair-sized bottles of the non-toxic, herbal insect repellent No Natz that did such a good job of beating back no-see-ums in the Bahamas and Dordogne. Because three--not one, not two, but three--returning travelers warned me about the biting sand flies on the mountainous southwest coast of Kiwi-land. 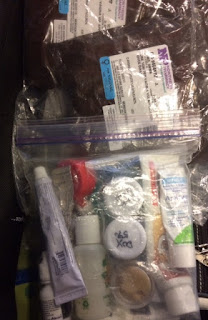 So here we are, on a six-hour flight to San Francisco, both of our carry-ons stowed overhead, liquids and all. We are upbeat now, but dreading the second, 13-hour slog to the land down under the Land Down Under. We will arrive two days after leaving home. 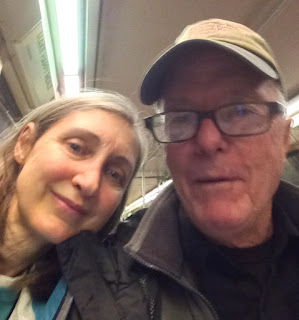 The fact is, I used that mosquito net every night in Andalucia and Dordogne. So I may have left the gloves and shoes behind this time, but the bug spray and bug screen made it into my "carry-on." In my view, they are indispensable.

The lessons are endless.

Posted by my alias Amber Jones Adventures at 7:07 PM