The Unbearable Disappearance of Masks and Gowns

(Written on March 20; some facts have changed since then)

I should have been a reporter. I wish I were one right now; I would be an activist, in-your-face inquisitor of our government officials. I've been following one of the sadder, more tragic stories coming out of US hospitals, and it breaks my heart. ﻿I have been researching the facts regarding the shortage of personal protective equipment (masks and gowns) for health-care workers, and it is one of the worst travesties I have heard about our government’s inaction, and delayed action, on the coronavirus. Not to mention on preparing for pandemics in general.

You have undoubtedly heard there is a massive shortage in the US of N95 respirator face masks that filter particles as small as 0.3 microns, and thus provide effective protection against viruses for doctors and nurses.

The latest news is that US citizens are sewing thousands of cheap fabric substitutes to give to hospitals. Some of my friends are sewing these, for what it’s worth. Bravo for them. I expect my sister, an accomplished seamstress, will do it as well if this story reaches her ears in Detroit (where news tends to be biased in the opposite direction of news in DC).

Why are people doing this, even though the homemade masks are nowhere near effective enough to filter out a tiny virus? Because last week CDC “loosened” its official guidelines for the personal protective equipment worn by health-care workers, to encourage them to re-use their N95s AND to wear homemade fabric masks when they run out of proper N95s. CDC used the language “last resort.” The US should never have reached the point of "last resort."

Normally, N95s are used only once. It’s for our protection as patients, as well as for the protection of medical staff. Doctors and nurses are incensed at this change in CDC guidance; you can see their protests all over the internet.

One of the most tragic news stories I saw is about a hospital already setting aside its used N95s aside for 5 days hoping the virus will die, then re-using them. But we know, don’t we, that science has found the virus can live on plastic up to 9 days? Another hospital is washing and re-using both masks and gowns. Several hospitals have pleaded for supplies to be released from the US national emergency supplies in the Strategic National Stockpile. A few hospitals, especially in Florida, succeeded. Why Florida? The government says it is based on population. Just curious: is Florida more densely populated than New York and California, which are the hardest hit so far?

Previously, all of our N95s for health care came from China, and —duh— they are having a bit of a struggle right now. Nonetheless, they are ramping up their manufacturing capability of N95s, and their surplus supply is primarily going to South Korea and Italy. Note, furthermore, that several NEW Chinese companies have starting making them, and doing so quickly. The US is trying to get in on buying them from China. As per our usual — start a trade war, then arm-wrestle. (But don’t get me started on that rant.)

The US produces N95s only for industrial/construction use. This week, the US also “loosened” a law that will now allow the industrial-style masks to be used in hospitals, without liability to the companies if they fail. Thus, those companies (primarily 3M) are voluntarily ramping up production. These masks are not quite as tight-fitting, and there will still be a massive shortage.

We have a Defense Production law that could be used to ram through more US manufacturing capability quickly, as we would during a war. President Trump pledged to do this -- repeatedly, according to news reports -- then repeatedly backed out. Naturally, Democrats have pushed back on this (in)decision.

Naturally, companies are reluctant to voluntarily take on the massive and expensive retooling that would be required to make N95 masks, claiming it would take months to ramp up manufacturing capability, the demand is short-term, and there is little money in it. (Yet - remember my note above about Chinese companies?) If we were at war, I bet the necessary retooling would be accomplished in a few short weeks—because the government would make sure it was profitable.

Companies who could make more hospital gowns also are resisting ramping up production, citing the short-term, unprofitable nature of the demand. So hospitals are washing and reusing them. In Spain, dress designer companies are making gowns for hospitals. Now. In the US, there is merely debate, in Vogue magazine, whether designers could/should do the same here. Later, baby. Maybe. 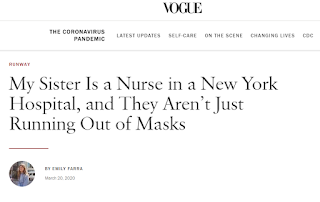 Folks, given the US government and US industry’s inaction on saving the planet and its populations from climate change, why would we expect them to ramp up to save the population from disease? Short answer: we are not at all surprised. The only thing ramped up recently was favoritism to Big Oil and Gas, and insider trading in stocks by government officials after they were briefed on the virus, but before they told the public.

I am not a reporter. And actually reporters are already ramping up to cover this story from all the angles I’ve mentioned above; the stories aresifting out, one by one. One thing I haven’t heard all day, surprisingly, is that this shortage of masks and gowns is “fake news.” Could it be that the government is actually listening? ... Nah .... Too much to ask.
Posted by my alias Amber Jones Adventures at 1:26 PM