Up the Coast on a Cruiser: Forests, Fog, and Whales

Sailing--or should I say motoring--for almost a week now, up the eastern (inland) coast of Vancouver Island, B.C. 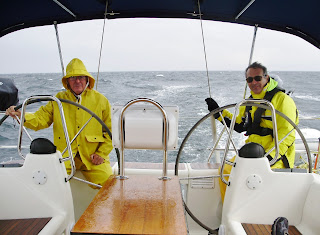 We stopped at small Hornby and Cortes Islands, both of which offer yoga, an organic market, and spiritual retreats--who knew, way up her on the British Columbia coast? One retreat center, Hollyhock, is expensive and beautiful, on a rocky beach of Cortes. Groomed grounds, organic garden, and the types of programs that make me want to just sit back and absorb (meditation, healing, inner transformatoin, you know, the usual spiritual stuff). And a writers' workshop that called to me "come back, come back"! Dinghied, walked, and hitchhiked from our anchorage in Cortes Bay to reach Hollyhock, 4 miles away. Also on Cortes, made a "karmic connection" at Babbling Buddha retreat center, with a former Buddhist monk. He was over the moon that I stopped in to chat, only to discover that we had mutual acquaintances back east. 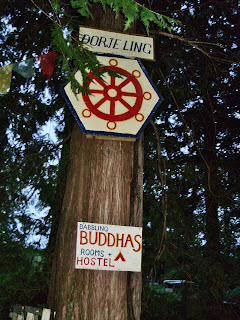 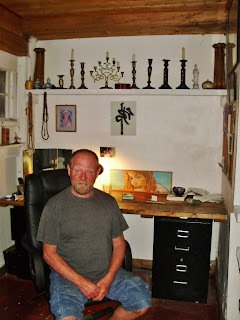 We are keeping a steady pace to accommodate schedules planned by skipper Dave and wife Joanne, who arranged for crew to get on and off the boat at prearranged places and times, some of them remote. Mark came aboard at Campbell River after a plane, bus, and ferry journey; five of us now. Plenty to do on board just to run the boat: steering, navigating, plotting routes, spotting (lookout for boat traffic, logs, kelp, rogue waves, and crab pots), preparing food and drink, wildlife watch (otters seals, deer, dolphins and whales so far). Not much down time for relaxing with a book or strumming the guitar--until yesterday.

Yesterday, we were socked in by heavy fog in a tiny cove called Spout Bay, behind Spout Islet, a rock on the north side of Hanson Island. Caught up on reading and writing. Did a modified yoga practice in our tiny quarters, surrounded by the luggage we eat and sleep with. Neck, shoulder, wrist and ankle exercises and a modified spinal twist. One student joined me--skipper Dave, naturally hyperactive and glad for the chance to breathe deep and relax. Made music with Dave on the banjo and harp, me on the guitar I bought at a pawn shop in Vancouver. Mostly Bob Dylan and John Denver. Tomorrow, Neil Young. 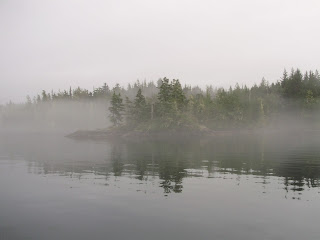 After anchoring securely in our little cove, illumination dawned on the origin of the name Spout Bay--whales were spouting out in Blackfish Channel! We heard them before we saw them, spouting fountains of mist, then gracefully breaching the surface and flipping their flukes (forked tail) skyward. Almost a mile away, but we saw enough of the big mammals to satisfy us. Later, we would see a humpback arch 3/4 of his body skyward above the waves. Observed colorful fishing boats and towboats pulling barges stacked high with tons of timber or shipping containers.

Eating well so far. Fresh halibut (grocery store) and frozen salmon (gift of a local fisherman) to break up the peanut butter, canned beans, and pasta-with-canned-tomato-sauce. A stir fry one night with tofu and fresh vegetables. Guess who cooked that. French toast and herbal tea. 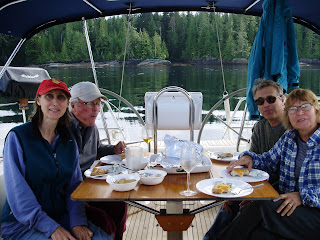 All's well on the low seas--that is, the inland passage (as opposed to the high seas, the outer passage on the pacific; time enough for that next week).

Posted by my alias Amber Jones Adventures at 1:28 PM