The Good, The Bad, And The Ugly, or How a Conch Shell Tried to Hijack Our Boat

This posting is dedicated to Greg, Barb, Bobby, and Joanna, who will be wide-eyed with disbelief and relief that they didn’t come with us.


In my previous posting I mentioned some goods and bads of our excursion to the Exumas. In the last 48 hours, we’ve upped the ante in both directions, with some REALLY goods and REALLY bads.

Really good: Dave from the sailboat Romana gave me a lift in his dinghy to snorkel at the Sea Aquarium off Cambridge Cay, boasting colorful fish, including some 3 or 4 feet long. 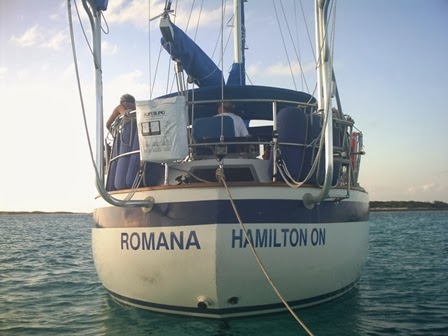 Really bad: Dave helped me out because our dinghy outboard was disabled. While I swam with the fishes, Dave’s passenger, Al, helped Pope find the problem—a broken and jammed shear pin.


Really good: Saw a stingray chased by a fish. 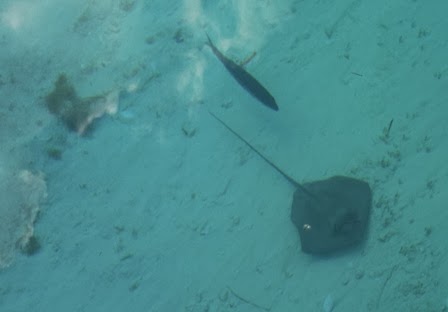 Really bad: The fish caught the stingray and latched onto its back. Parasite?


Really good:  Dental floss for sewing up the jib. 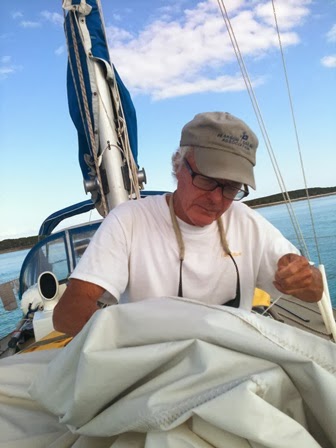 Really bad: Having to sew up the jib.
Really good: Drinks and conversation over happy hour with Bill and Alicia on the sailboat Destiny. They toiled for months to restore a vintage boat, older than ours. 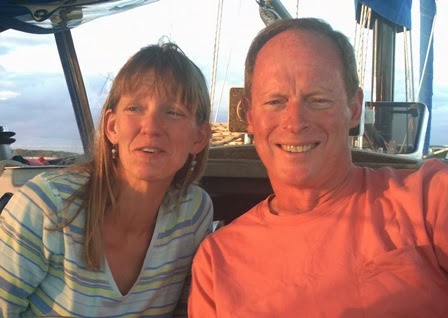 Really bad: We ran out of beer, rum, and ice (as well as milk, butter, and mayonnaise) nine miles from the nearest market, and had nothing to contribute to happy hour! Needless to say, we are on our way to market now, even though it is out of our way, in the opposite direction of home.


Really good: Vic and Gigi from the trawler Salty Turtle, whom we met earlier in Nassau, took Pope and me in their dinghy to snorkel in the Coral Garden on the southern tip of Cambridge Cay. 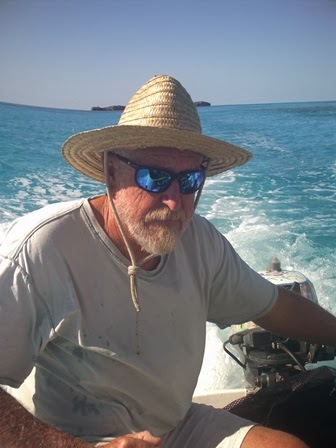 Really bad: Although Salty Turtle is anchored in a peaceful, beautiful, but narrow anchorage surrounded by sandbars (Pipe Creek), we were unable to summon the courage to go there because the night before, when we anchored in another peaceful, beautiful, but narrow anchorage surrounded by sandbars (Compass Cay), we washed up on a sandbar in a powerful current. For those interested in the whole sad sailors’ story, see the long version below. For those already bored, disinterested, or suspicious of my continuing saga of misadventures, skip right on down to the next “Really good.” (But not those of you who want to feel “really good” about not coming on this trip.)

Long version: After dropping our “hook” (a state-of-the-art Rocna anchor, with an excellent record of holding in most sea bottoms) in a narrow anchorage surrounded by sandbars, between Compass Cay and Pipe Cay, we “set” the anchor firmly by backing up the boat against the anchor line. One other boat was anchored just ahead of us. About 8 p.m., high tide, we heard and felt a rumble, possibly similar to a mild earthquake tremor. It only lasted a few seconds. We ran to the deck to see what was the matter, when what to our horrified eyes should appear, but the other boat – a quarter mile away! On the far side, we were perilously close to a channel into Exuma Sound, i.e., the ocean. The current was trying to sweep us that way. The anchor line was wrapped around the boat and firmly stuck under the keel, which in turn was embedded on a very shallow sandbar; in other words, we were hard aground. Thus began an all-night vigil and a ton of hard work--including Pope rowing out in the dinghy in wind, current, and dark to drop our spare Danforth anchor in deeper water--to prevent the boat from slipping farther onto the sandbar, get the line untangled, and keep the boat from getting pounded to pieces. At low tide, 2 a.m., the sandbar surfaced, only a shallow film of water washing over it. At high tide, 8 a.m., our keel  bumped heavily along the bottom and off the bar—minus a few quarts of paint. The current reversed, the current carried us away from the ocean, and the Danforth held. Whew!  Pope slipped out again in the dinghy, this time in growing light, to retrieve and re-drop the Rocna from the stern, just to make darn sure the boat couldn’t slip back onto the sandbar. At last, the problem became clear: a whopping big conch shell stuck in the middle of our Rocna! Rubbing its tough cheeks against the cool stainless steel, and preventing the anchor from digging in. You see, every 6 hours or so, the powerful currents flowing in and out of the cuts between the Exuma islands (cays) switch directions, from incoming tide to outgoing tide (flood and ebb). Anchors have to turn around 180 degrees and reset before the current sweeps the boat away. Until that night, our Rocna performed superbly. This time, that darn shell probably prevented the reset. Nature always wins! Anyway, the end of the story: after a couple of hours of sleep, we began the hard work of retrieving two anchors set in opposite directions, bow and stern. For an explanation of why that is difficult, ask any sailor. Pope had to lift the 40-pound Danforth into the dinghy. Meanwhile, his confidence in his trusty Rocna was badly shaken.

Really good: Sunrise over Pipe Cay while waiting for high tide to bump us off the bar. 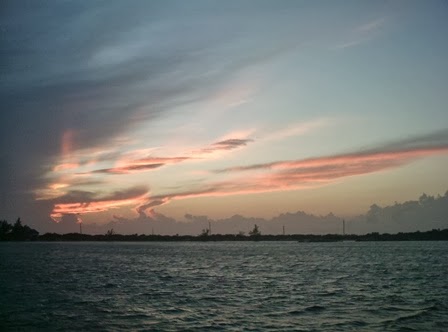 Really bad: Smashed index finger, adding to multiple cuts, sprains, and bruises from anchoring in strong wind and currents. The Exumas are not surrounded by placid seas as I envisioned; we had calm weather only 2 days out of 20 (one of the 2 is pictured below). Right now, it is blowing 15 mph and the boat is rocking and swinging wildly. 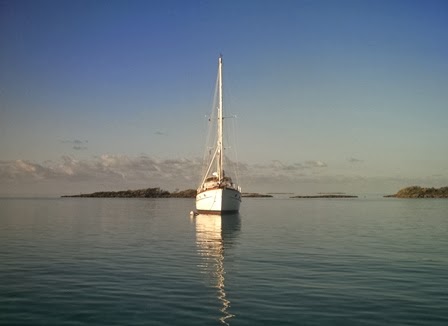 Really good: Hammock on the beach. 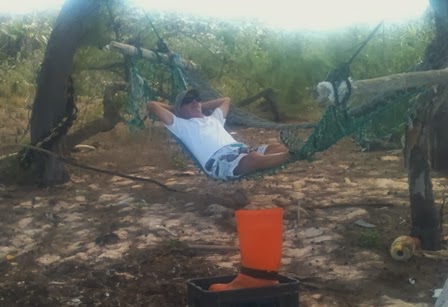 Really bad:  Getting up from hammock.


Finally, the really ugly:  There isn’t much! Everything is visually stunning--variety of blue water colors, beaches, rocks, boats, marine life--even when conditions are rough. 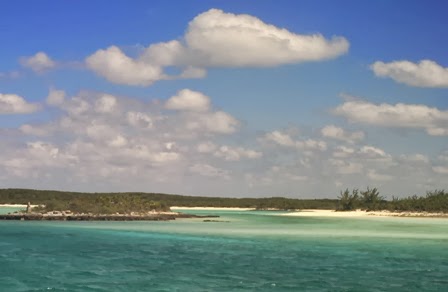 But! There IS the “chicken stance,” the ugly grimace and defiant posture exhibited by skippers, usually on large, expensive boats, when smaller boats such as Echo II anchor at a distance they deem too close and at risk of running into their shining fiberglass investment (or possibly just deflating their ego?). The m.o. is to stand on the forward deck during the lesser boat’s anchoring operation, with hands on hips and elbows extended, crowing like a rooster. The message is clear: go away, intruder—this is my patch of sea!
Posted by my alias Amber Jones Adventures at 9:18 AM