Oh, Irony! The Hassle of Getting Home

With that calm, blue Caribbean vibe still coursing through my veins, landing in the US was like an electro-jolt from a Taser. 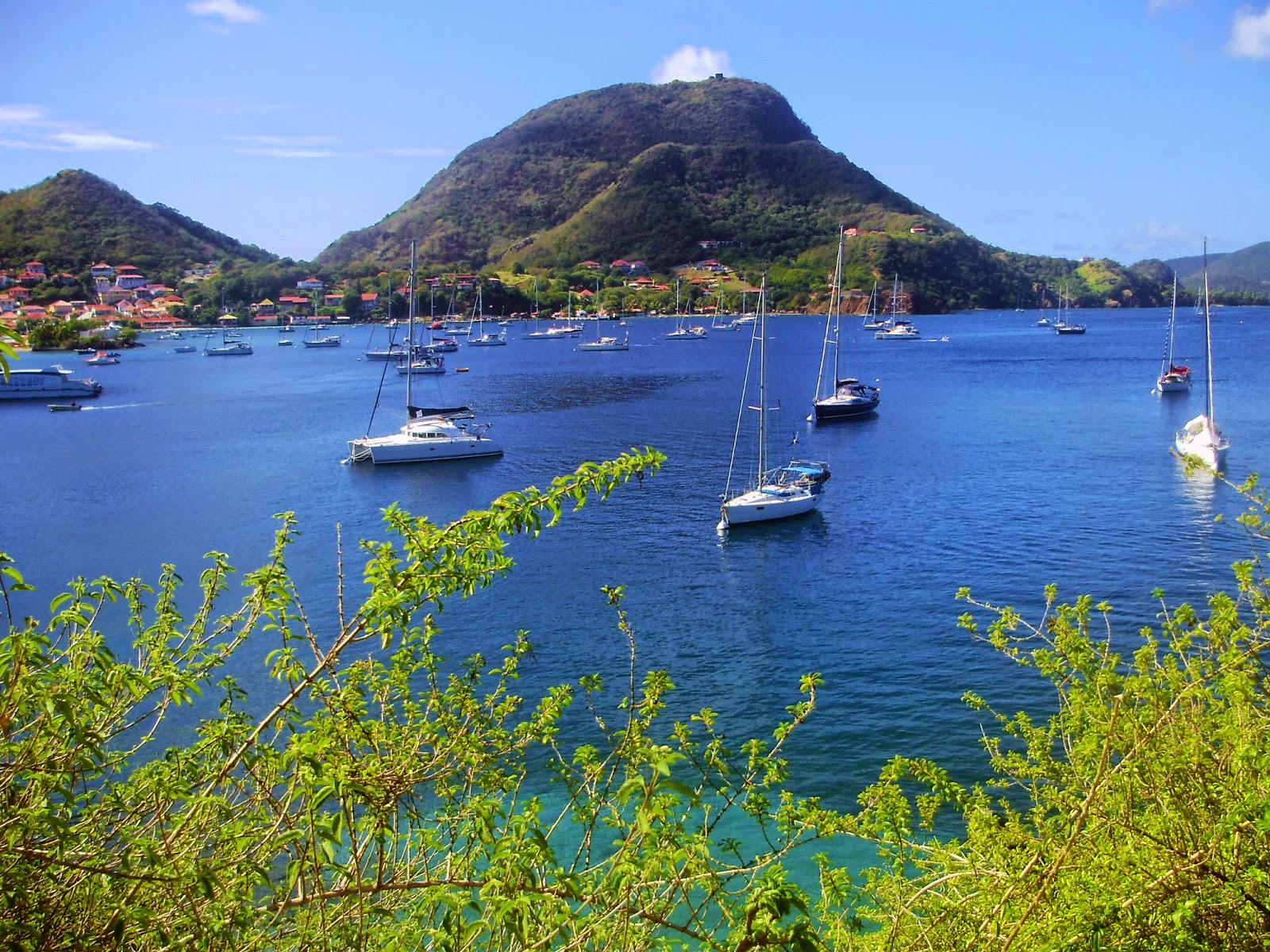 I knew something was up when people getting off the plane ran like hell. We hadn't arrived late. So what was their problem?

They knew the score. Miami airport was like the National Mall: on 4th of July: people lined up for a half mile, 10,000 or more, snaking down a long, long, long hall -- hoping to get into Passport Control before the concert was over.

Obviously the line was not a one-time anomaly; after all, they built this amazingly long hall just for that. 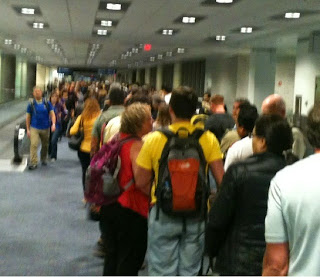 Can you see the front of the hall, way up there, upper left? 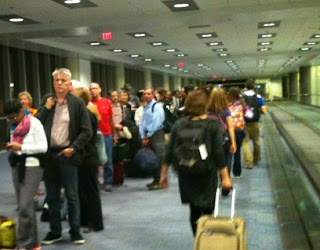 Just as many people behind us
After the first hour, airport personnel took steps to reduce the potential for riot: directing great hordes of people to other rooms, other lines. Utter chaos. Yet we eventually moved forward. Another  30 minutes; got our passports stamped.

After racing to clear baggage, customs, and rechecking luggage, we came to another abrupt halt: dense mass of people blocking our way. Took a while to figure out this was TSA security. According to the clock, our flight was boarding, somewhere in another wing of the airport.

Amber took a bold chance and raced (actually, hobbled) to the front of the hall--weaving in and out and raising the ire of the 2,000 or so people in front of us--yelling "Our flight is boarding!!"

IT WORKED!!!!!! Well, sort of. People got miffed, officials said "return to the back of the line, do not pass Go, do not collect $200," when suddenly a tiny voice whispered in my ear, "Over here!"

An American Airlines employee off to the side. Looked at my boarding pass. WALKED us to the front of the hall, to the TSA line. I took great care not to smirk, or even smile. Other officials protested, the crowd booed.

We made the final boarding call for our flight. Just goes to show: it can't hurt to ask!

Now for the irony: the plane didn't leave.

Flight time came and went. Captain made an announcement. Something about Washington National noise restrictions after 10 pm; the plane had to shed several thousand pounds of fuel before we could leave Miami. Waiting for the fuel truck to come pump us out. Sitting next to a tiny crying baby and big-ass mama. Plane otherwise half empty; people stuck in those endless halls.

Because of the hour or so delay, people who would otherwise have missed the flight loaded up the plane. I got worried; what if some of these people were behind us in the TSA line and recognized us?

I donned my blue sweatshirt to cover my bright green shirt, and pulled Pope's cap off his head. Hunkered down, nose in book, as the evening wore on out there on the tarmac. No thugs stopped at our seats to settle the score.

Onward to Washington. But the story didn't end there. Oh, no. Plane lands at DCA, taxis to terminal. Terminal lights go out suddenly. Power outage. Another long wait on the plane while the elves are stirred out of hibernation to crank up the emergency generators. Plane deboards. Luggage is hand-carried to the baggage room; carousels are silent.

It is now 1:18 a.m. No taxis in sight at National; we head for Metro. "Due to scheduled maintenance, trains are running every 24 minutes." It is 30 degrees on the station platform. We shiver in our Caribbean windbreakers and baseball caps.

We transfer at L'Enfant Plaza and wait again. At least it is indoors. Last train. Home at 3 am. Crawl into bed around 4.

Posted by my alias Amber Jones Adventures at 5:58 PM