Are we ready yet? What month is it? Is there a Dark 'n' Stormy on board? 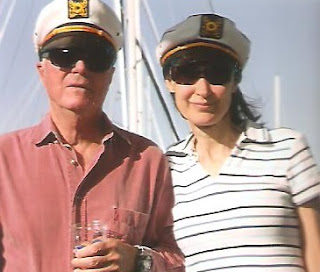 Captain Pope and First Mate Amber, getting the boat shipshape and ready to sail out 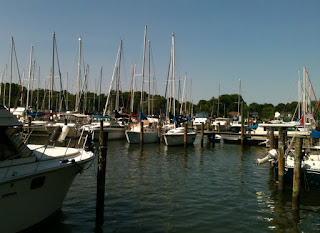 The 2016 sailing season is well underway at our marina on the west side of Chesapeake Bay--and I have finally begun to set foot on our sailboat, Echo II. Captain Pope has worked on her almost every day since February, on the hard and later in the water: new rigging, new antenna, new batteries, rewiring radio, upgrading GPS, fixing leaks, engine maintenance, cleaning holds and tanks. He finally took her out in June, for a couple of single-hand races. 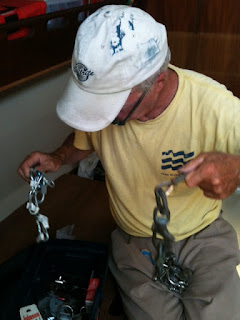 All work and no play, as long as it's on his baby Echo II, makes Pope a happy man


Being only the first mate, and a fair-weather and mildly reluctant sailor to boot, I've been on the boat only five times since the boat went in the water in April. My jobs: cleaning mold and stains and bilge, inventory, unpacking from winter storage, provisioning, sewing, hold the wrench or pass the screwdriver for Pope. 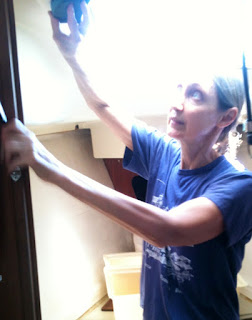 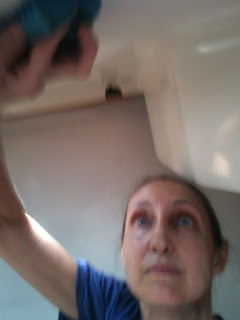 Laying on my back in the tiny v-berth (remember those blog posts back in Fall 2013 about living aboard a boat?) to get to the tight spots where mold grows thick and black

If you remember from my early blogging days, my fantasies of living aboard a boat in Paradise didn't last long after a few weeks of rockin' and rollin' and cleaning and repairing on our way down the coast toward the Bahamas. It was a lot of work! It's easy to forget when she shines so brightly in the sun, resting calmly on her mooring in Whitemarsh Creek. 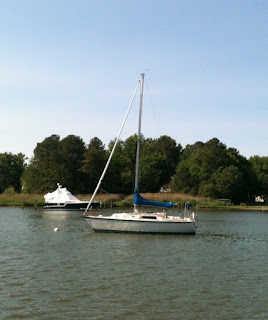 Echo II looking bright and shiny with her new jibsail

I like it when she's sitting still! It's the sailing--and heeling--in strong winds that make me cringe and sometimes go below and hide under a pillow. 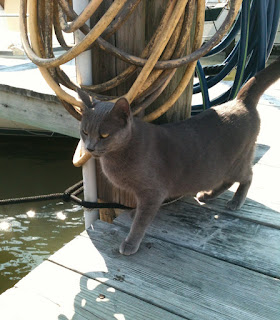 Why can't I stay calm like this confident mariner? (Because she has nine lives!) Boat cat at Holiday Hill Marina; lives aboard one sailboat but is adept at hopping on and off all of them


Pope will confirm there has been little letup in my fear of boating and sailing. Last week he took me along for a brief spin down the Rhode River in order to clean the bottom in slightly cleaner water. Mission aborted: water too cold. But not before causing me one or two minor panic attacks, though: anchoring near a shoal, anchor chain tangled, scanning the water anxiously for my submerged partner. 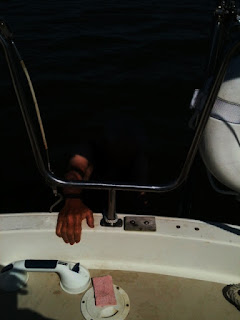 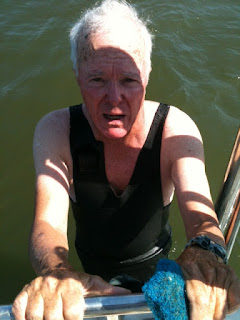 Ah, there he is, still breathing but too cold for serious underwater scrubbing!


In return for doing most of the work, Pope has most of the fun. Of course, he loves the whole life; he's a lifelong sailor. Since his father lived on a sailboat (shipwrecked off the coast of Florida with Pope aboard), it's in his blood--unlike the sheltered urban upbringing of his landlubber partner and first mate. He does 90% of the sailing, 85% of the work, and 5% of the worrying (that's my job).


Keeping Echo II on a mooring instead of in a slip at the dock means he also has to travel back and forth in a kayak to shuttle tools, parts, and provisions, bringing the boat to the dock only to pick me up when I come to the marina to help out. 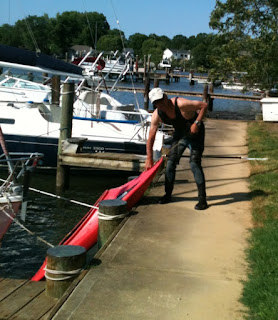 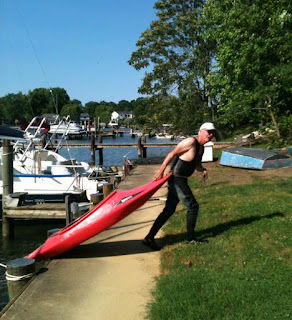 Using a little boat to get to the big boat; who needs weight-lifting when you're carrying 10-pound drills and 40-pound kayaks?

In return for my 10% of the sailing and 15% of the work I get to attend parties. Socializing is a big part of the boating life, and the part that has made my adventures and worries worthwhile. Last week, after a long day of scrubbing in the hot sun, we cooled down with a brew at Eastport's "Latitude Adjustment Party." It was an annual send-off for mariners leaving the next morning for the annual Annapolis-Bermuda race. Cross half an ocean? No thanks; I like being in sight of land. 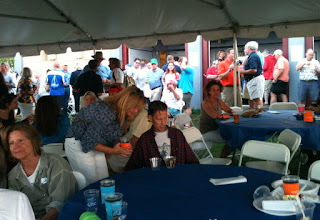 Don't let the empty tables fool you; these sailors are seriously drinking in preparation for days at sea 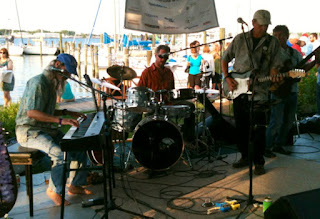 This weekend, Pope returned from a single-handed race on Echo II with a bent stanchion an a few new bumps and loose screws. And so the work continues. And for what adventure are we, especially Pope, spending these seemingly endless days working, working, working, without pay and mostly without play?

Funny you should ask. Just today, I heard someone mention the possibility of another winter in the Bahamas.


Posted by my alias Amber Jones Adventures at 10:07 PM