Toddler Shoots Mom; Found Gun in Drawer (Or: A Grisly Adventure Into History)


Today marks a dark day in human history. Another mass shooting. Another indication of the ready availability of weapons of mass destruction of human beings. What struck me as one of the saddest headlines is this one: "The gun used in the Orlando shooting is becoming mass shooters’ weapon of choice."


Is gun violence really increasing at the rate it seems to be? Perhaps. Just as many headlines, however, seem to be about the incidental and, in many cases, accidental use of firearms.


Pope likes to post link on his Facebook page to headlines like "Toddlers have shot at least 23 people this year" (Washington Post). "Churchgoer killed in fight over seat at Sunday service" (NY Daily News). "Tragedy on the highway: Witnesses say child got hold of gun, shot woman driving on Hwy 175" (Fox News). What he probably doesn't realize is that this is not new news!


Folks, hang onto your hat (so it doesn't get "blown away"). To assuage your low humor on this gray day, join me on an enlightening adventure into some historical trivia about gun use, mis-use, and accidents in the United States--a reminder that guns have been a problem for a long, long time. 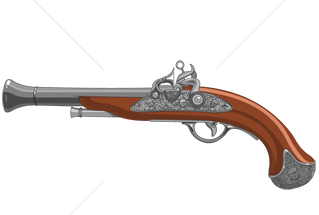 Flintlock rifles were in use for almost 200 years, from the early 17th to early 19th century; they produced a reliable spark from striking flint, and were easy to make. We have seen them in the movies--slung across a saddle in a Western, brandished by pirates, or drawn in a duel. They are still in use by historic re-enactors and by "black-powder" hunting enthusiasts.


When I saw this book on the library shelf, I just had to pick it up for Pope: "Melancholy Accidents: Three Centuries of Stray Bullets and Bad Luck." 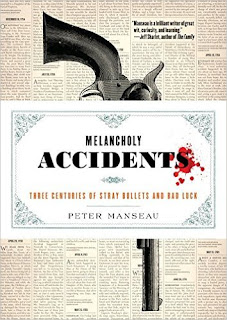 According to the author, Peter Manseau, incidents of guns accidentally causing people grievous harm instead of protecting them--whether inadvertent suicides or bad aim with a hunting rifle--were labeled "melancholy accidents." The accounts in newspapers of early America did not often mention the type of gun. Apparently a gun was a gun was a Gun. Otherwise, however, the accounts were colorfully descriptive and widely reprinted:


We have Advice from Lunenberg, that on the first Instant, a very melancholy Accident happened there. A number of Men in trying a new Gun by firing at a Mark against the side of a Barn, one of the Bullets struck upon some piece of Iron and split it (the Bullet) in two, one piece of which flew to a considerable Distance from the Barn, and upon a contrary line to its natural course, and struck one Dr. Rice (who was travelling the Road) in the Forehead or Temple, which wounded him to such a Degree, that he died about Nine o'Clock that Night. That piece of the Bullet that struck Dr. Rice was found in his Hat, the other piece (which flew quite a contrary way) fell down by the Rev. Mr. Stern's Door where some Persons were standing but did no Hurt. However, Mr. Sterns sent the piece to the Men who were firing, with a desire that they would take more Care for the future.
- As reported February 13, 1739, in the New England Weekly Journal, Boston Massachusetts; from "Melancholy Accidents" 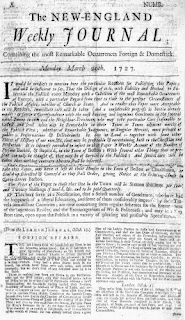 Even in the 1700s, innocent children were often involved, just as they are in the current headline-shouting news accounts:


NEWPORT--Last Sunday happened a most melancholy Accident at the House of Mr. Benjamin Dunham, at the Point Ferry-House, at about half after Two o'Clock in the Afternoon, viz. One of his Sons, a Child about Seven Years old, was sitting upon a Table, at which Instant another of his Sons, a Lad about Fourteen Years old, being in the next room, chanced to take up a Gun loaded with Goose Shot, to view it, when it immediately discharged, pierced through the partition, and shot the youngest in the Forehead, and some of the Shot came out at the back Part of his Head. He lingered till about Six o'clock, and died.
- As reported October 29, 1765, in The Newport Mercury, Newport, Rhode Island; from "Melancholy Accidents"


We hear from Leicester that on Tuesday last a very melancholy Accident happened in that Town: A Son of Mr. William Henshaw, about 6 Years of Age, and another Lad being in a Chamber playing with a Gun, which they tho't not to be loaded. The Lad put the muzzle of the Gun to the Ear of Mr. Henshaw's Son, when it went off with a whole Charge of Partridge Shot, which tore his head to pieces, and killed him instantly.
- As reported June 19, 1772, in The Connecticut Journal and New Haven Post Boy, New Haven, Connecticut; from "Melancholy Accidents" 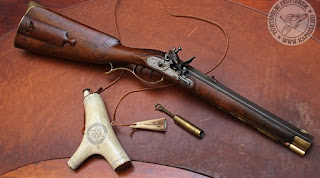 
A century later, reports of such mishaps continued:


A Little Girl Shot--We have just been informed that a little boy, son of a Mr. Evans of Cass county, residing some ten miles south of this place, accidentally shot his little sister. The following are the facts as we have learned them. The little boy aimed to shoot a bird, not noticing his little sister, who was in range of the gun. The ball entered the back and passed out at the breast, dangerously wounding her. No hopes of her recovery.
- As reported on June 14, 1860, in The Plymouth Weekly Democrat, Plymouth, Indiana; from "Melancholy Accidents"


Hunting, of course, has accounted for a large proportion of both deliberate and accidental gun discharges historically--leading to planned and unplanned deaths and, some might say, the hijacking of the Second Amendment to "protect" one's right to kill animals as well as to defend one's self and one's community from invasion.


In the 1800s, the increasing demand for meat, as well as the demands for wildfowl feathers to adorn womens' hats, led to the rise of professional hunters and new forms of mass weaponry. 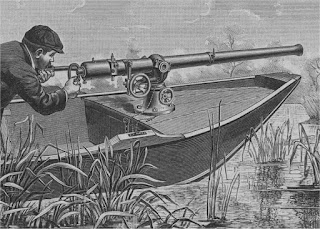 A single shot from the heavy and cumbersome punt gun could kill as many as 50 birds at once, helping to meet the increasing demand for meat and fashion. The firepower was so great the whole boat would recoil. Punt guns were banned in most states by the 1860s because of depleted waterfowl stocks. Photo from Rare Historical Photos. 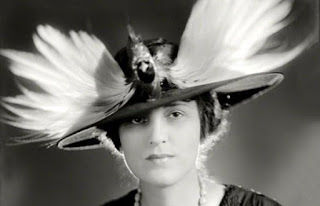 The wildly popular feather hat accounted for the slaughter of millions of birds, leading the Massachusetts Audubon Society to successfully lobby for the first federal-level conservation legislation, the Lacey Act of 1900. Photo from the blog Sociological Images by Lisa Wade 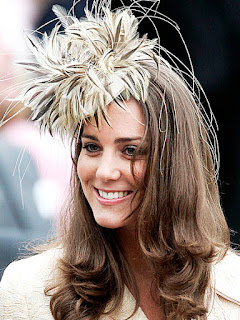 There are plenty of vintage hats with bird feathers for sale on eBay and Etsy--such as one from the 1940s with colorful pheasant feathers, and one with a "dramatic feather spray that frames the face" from the 1930s; however, it's not necessary to delve into history to find such hats, because they are still being made: according to her hatmaker, Princess Kate Middleton's creations can take up to three days to make. She wore this one to a wedding.

Among the many and varied reports of gun uses, mis-uses, and accidents over the centuries, there is none as heart-wrenching (yet satisfactory) as those of the just-plain-fools who shoot themselves with their own guns. First, there were the historic fools (if it weren't for the historical newspaper record, I would have guessed this to be a fake account, crying out for debunking by Snopes, on the basis of the name alone):

On the 2d inst. a young man belonging to Waterloo, Monroe co., Ill., named Constantine L. Omelveny, accidentally shot himself. He started from his father's on a gunning excursion, and previous to loading his piece, unconscious of its containing a load, placed his foot upon the lock to raise it, and put his mouth to the muzzle for the purpose of blowing in it to ascertain if it was clear; his foot slipped and discharged the whole contents into his mouth, killing him instantly.
- As reported August 25, 1843 in The Times-Picayune, New Orleans, Louisiana; from "Melancholy Accidents"

And, finally, there are the current, 21st-century fools, slaves to new technology but still fascinated by the old. According to Fox News in St. Louis, people believe that a 15-year-old in Overland, Missouri, died last week after accidentally shooting himself in the chest while trying to take a selfie with a loaded gun. He found the gun on the top shelf of a closet, with no safety catch.

Posted by my alias Amber Jones Adventures at 3:44 PM