It Happened One Night...414 Steps and a Look at David's Butt 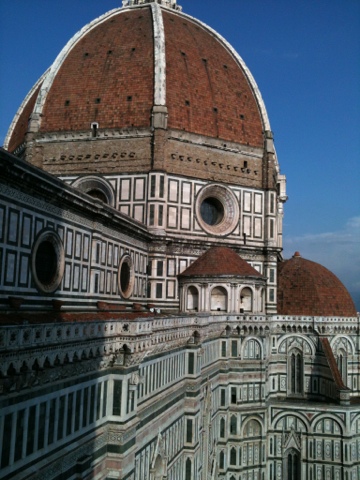 It happened one night in Florence. No, I didn't meet any suave Italian studs at the top of the Duomo.  Though a nattily attired gent with a silk scarf offered advice on catching the airport bus. And smiled again when I disembarked. Too bad he was 20 years younger. Or thereabouts.
What did happen was a rare opportunity to see David's contours--on short notice. 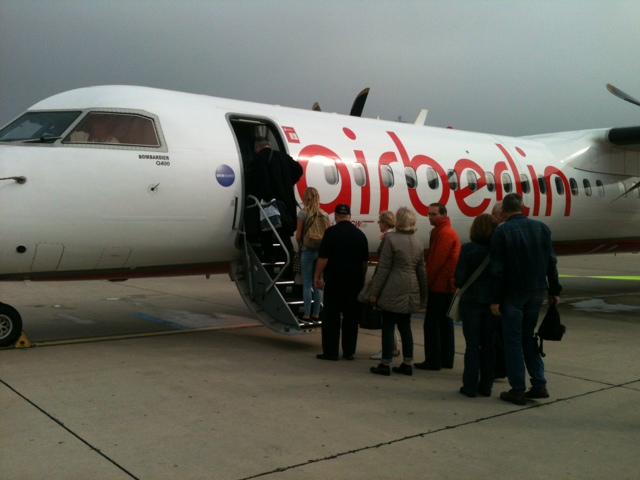 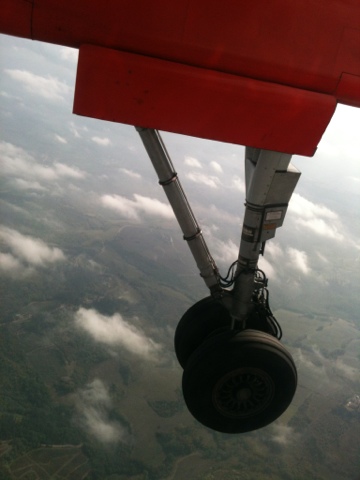 First, a short hop on a turbo prop (yes they still fly them) from Vienna. Landing gear in the wings outside my window. Stepping out to steamy skies, just like a DC summer. Slow going with a rolling suitcase over rough stone-block sidewalks. Check-in at a delightful B&B practically next door to the train station, Tre Gigli. All that was just setting the scene for the main event.
I had arrived. I had one night. What to do? Famous churches? Everywhere you look. Stop in at three or four on the way to anywhere. 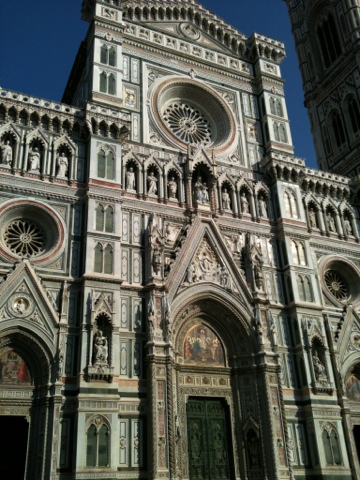 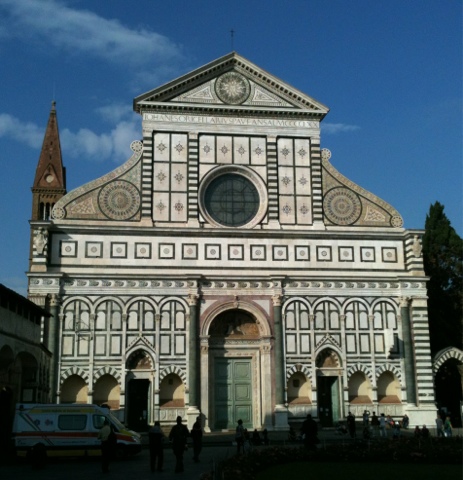 Check out the frescoes. The door carvings. The statuary. 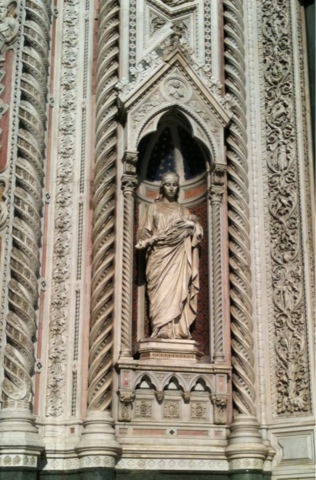 When in Florence, one must at least climb the narrow, winding stone staircase to the top of the Duomo bell tower. 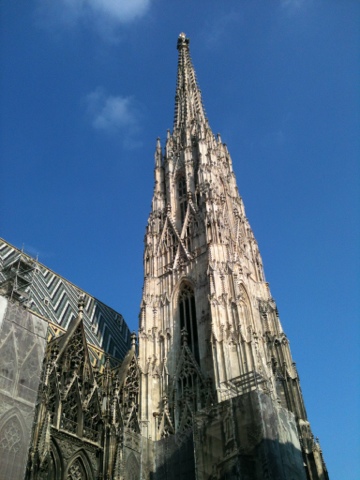 Two-way traffic on the two-foot-wide stairs surrounded by solid stone walls.. Congested and claustrophobic and steep. Not for the weak-hearted. But obligatory for most reasonably healthy tourists. 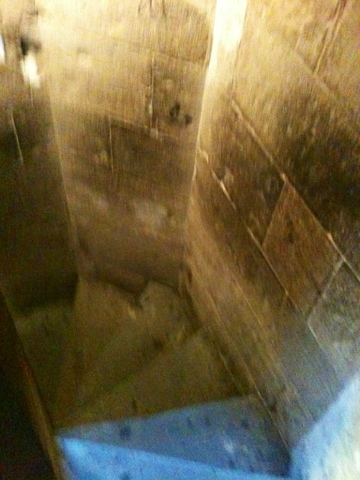 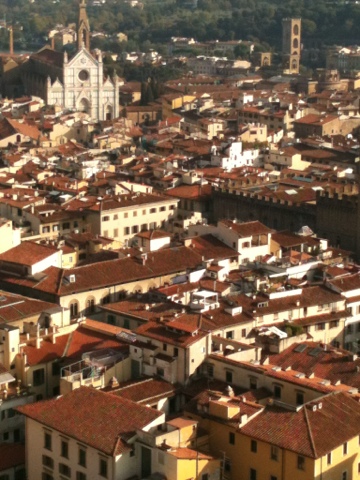 Next? Da Vinci Museum? Mmmm, maybe. But I see a lot of him in Washington. Michelangelo's David? My first choice, but no such luck; tickets are reserved days in advance. I have only one night. My landlord personally called and begged. They laughed her off.
Still, it can never hurt to ask--my favorite philosophy and one all of my friends and family have heard me espouse. So I strolled on over, checked out the scene (wall-to-wall crowds). And started asking.
Thus, a half hour before closing time, I got in the door with a private tour guide wanting to make a few bucks (or euros), for only double the regular price. Surprise! There is more in the Galleria Dell'Academia than the mammoth statue of Goliath's slayer. 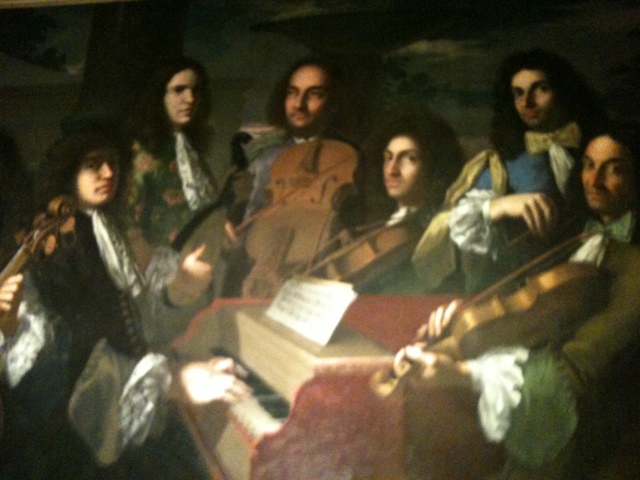 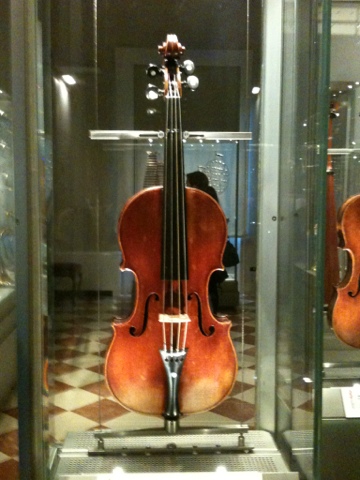 Stradivarius violins and cellos played by the Medici family, and paintings recording the deed. The first pianoforte. Artistic depictions and altar decorations commemorating the life of St. Francis of Assissi. 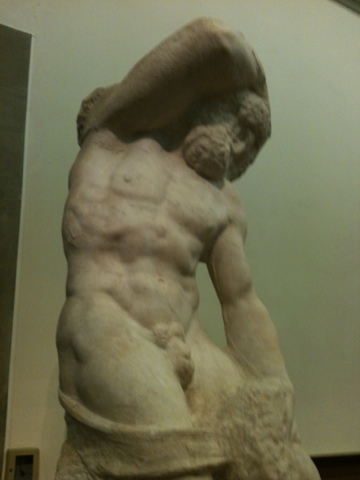 Unfinished statues started by Michelangelo on commission, abandoned in a rage. He destroyed several others. (His temper is legendary.) 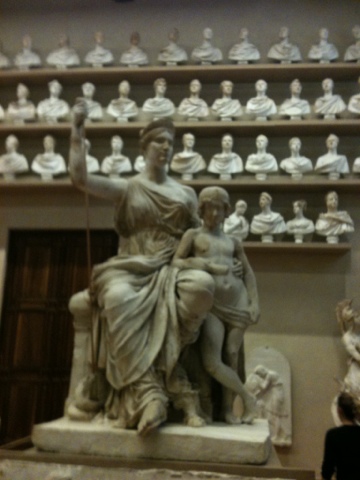 Plaster busts, anyone? By students of the Academy. Some by protégés of Michelangelo. 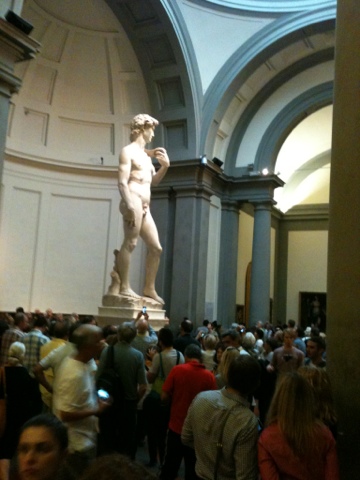 Finally, the star attraction. David is an old friend. Thirty-three years ago, I visited him in Florence. He hasn't aged much. But something else has changed. I don't remember big crowds!
The star attraction to the fair gender, according to my delightfully witty tour guide, is David's butt. You decide, girlfriends. Front or rear? 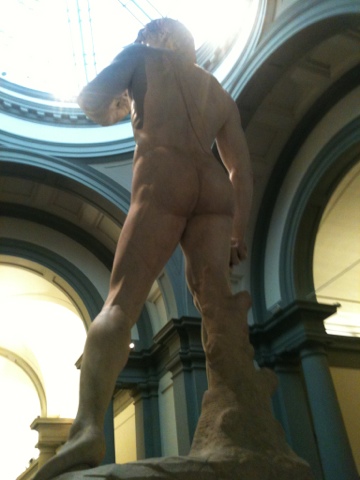 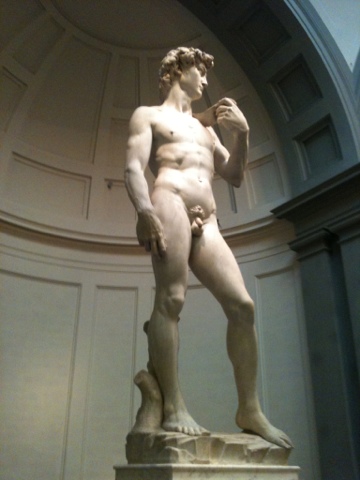 Ah, what a night!
Posted by my alias Amber Jones Adventures at 11:07 AM