Nassau Harbor Control to Skipper Pope: You're drifting. Is something wrong?


Pope to The Whole World of Sailors on Channel 16, VHF Radio: Our engine is disabled. We are re-entering the harbor under sail.    [TRANSLATION: Our engine blew up and, despite Pope's heroic attempts to fix it, it won't re-start. We will now demonstrate Pope's skill in sailing safely to a dock, which many sailors don't even bother to practice. But he does.]

Harbor Control: Roger that. We will alert traffic in the harbor.

Pope to Harbour Club Marina: We are disabled and would like to sail up to your fuel dock until we figure out what in the heck to do.

Harbour Club Marina: OK, we will ask the crew of one of the mega-yachts to help you tie up. But you can't stay there on our fuel dock!!!

Captain of Sailboat Pearl to Pope: Can we help? We can tow you into a slip with our dinghy.

Pope to Pearl: You're a life saver!!! Our hero, Bruce!

First Mate Amber to Blog Readers: Here we are again, safely back in a marina, after our oil filter blew out, a mile or two outside the harbor. We were finally on our way to the Exumas and Pope's lifetime dream--or so we thought.  Meant to be? Or not meant to be? Captain Bruce of Pearl maneuvered us into a slip. A mechanic from Albert's Marine, Jason, miraculously appeared a few hours later... 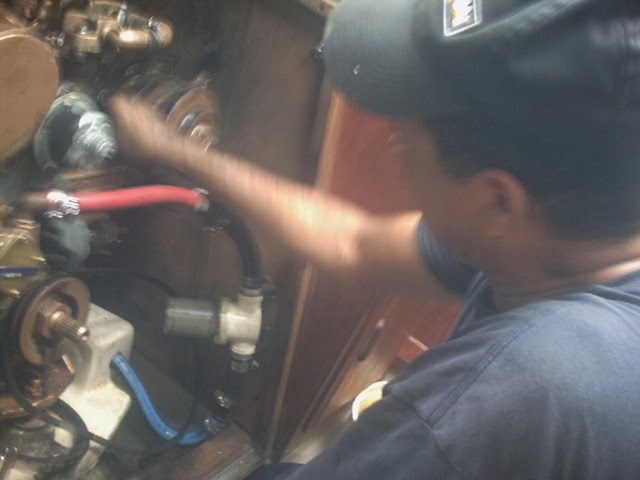 He confirmed Pope's assumption--foul fuel filter, sold to us in St. Augustine as a substitute for the real thing, but with mismatched threads. A $20 mistake that could have cost us a $5,000 engine job, if we hadn't stopped dead when we did. Jason the mechanic held the phone to the engine so his boss Albert could listen, then he checked oil compression. Pronounced verdict: SOUNDS GOOD, OK TO GO! (Even though I am still suspicious of the clacking sounds.)


But we can't leave again this week, having missed the weather window today; a storm is rolling in tonight with 30-35 mph winds.  Captain is depressed. Get well wishes for Captain Pope and his trusty diesel welcome.
Posted by my alias Amber Jones Adventures at 11:36 AM