We came south to escape the cold. It ain't happenin'. But the sunsets are striking and the company is fine.

We are still tied up at the Beaufort yacht club, courtesy of our new friends the Cheneys, old hands at sailing who live just down the road. We first looked them up in Maine because Pope was fascinated with the adventures in Bill Cheney's book, Penelope Down East.

Besides sailing, Bill and Kendra are well-versed in literature, history, geography, and a plethora of worldly issues, making for fascinating conversation about everything from world wars to grouse hunting aboard Echo II and in their cozy living room, fireplace ablaze. 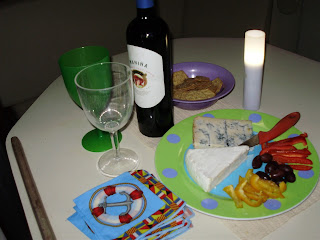 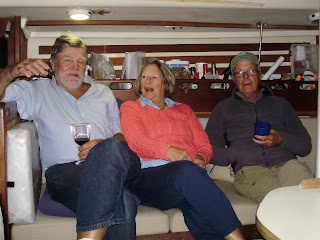 For indeed it is cold here. Better to be in Florida. We could have reached St. Augustine by now, where temperatures are 10-15 degrees higher. We are delaying in order to celebrate a sumptuous oyster-and-turkey Thanksgiving, complete with Savannah rice; rich, creamy mac 'n' cheese; southern-style green beans; and pecan pie. The Barrow family feast (with several branches of the family) is worth hunkering down for a few days.

The South Carolina waterway is extracting its price in severe winds, waves, and steeply declining temperatures. 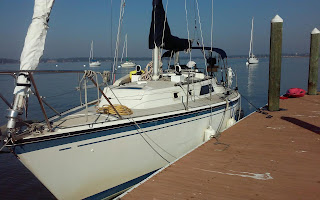 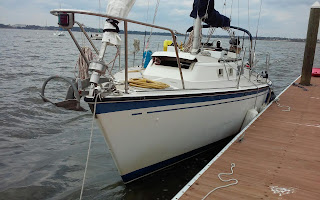 These photos offer a tiny taste of the difference between the calm sunny days of last week and the past two days, when we suffered from temperatures in the 30s, winds in the 20s, and the bang bang bang bang bang of waves and chop striking the hull while we shivered in our sleeping bags and ski caps. There's no way to record the echo of the constant thumping against the boat; I did my best from outside with this video of Echo II rockin' and rollin' at the Beaufort Yacht and Sailing Club dock.

A few boats left the dock for an afternoon sail, struggling back to safety with the wind and current against them. I would not have been happy to be out motoring, let alone sailing, in these conditions. The pastoral views of marsh and docks belie the winter conditions. 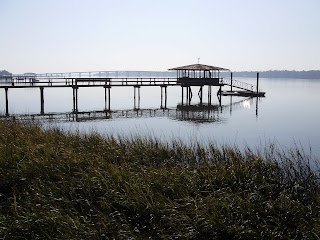 Year-round, even in the absence of wind, the strong currents and 9- to-10-foot tides are a challenge for boaters and landowners. 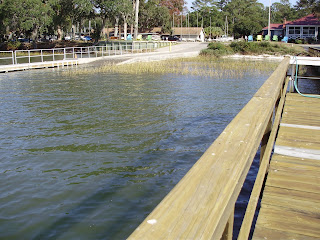 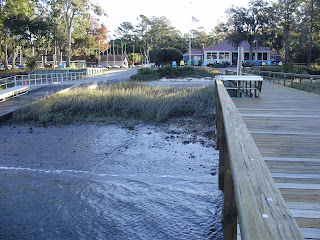 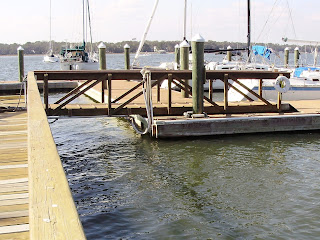 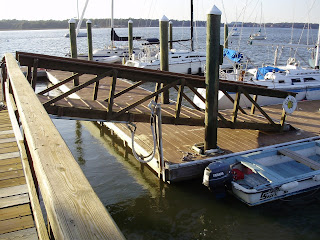 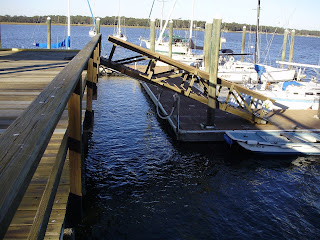 The pillars that keep the floating docks from floating freely upstream or downstream in the current are kept separate--a round peg in a square hole. 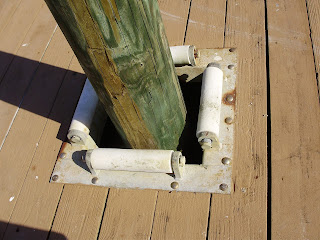 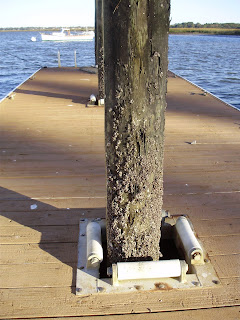 The floating docks bounce freely up and down as they try to escape and run with the current. Note the masses of barnacles that are revealed as the water level falls.

Not to mention the extensive oyster beds uncovered only at low tide. (Aren't they ugly in their natural state? These are the raw ingredients of your seafood salad or raw bar happy hour, all cleaned up and dressed for dinner.) 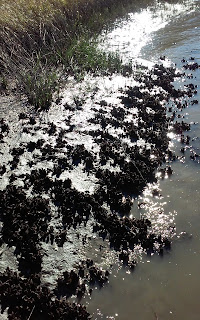 Cold or no cold, high tide or low, my mouth waters in anticipation of oyster-and-turkey day.

Posted by my alias Amber Jones Adventures at 11:12 AM