Back to Barcelona--A Study in Fortitude and Time Management

This week we are staying in a decrepit slum in an alley in the Born district of Barcelona's old town, which is supposedly the hot, up-and-coming district. Complete with drug overdoses in the alley, walls peeling in the staircase, windows missing their glass, and garbage in the streets. 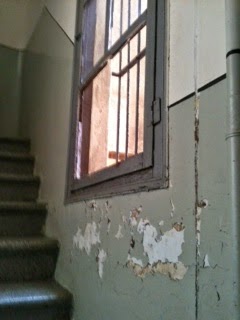 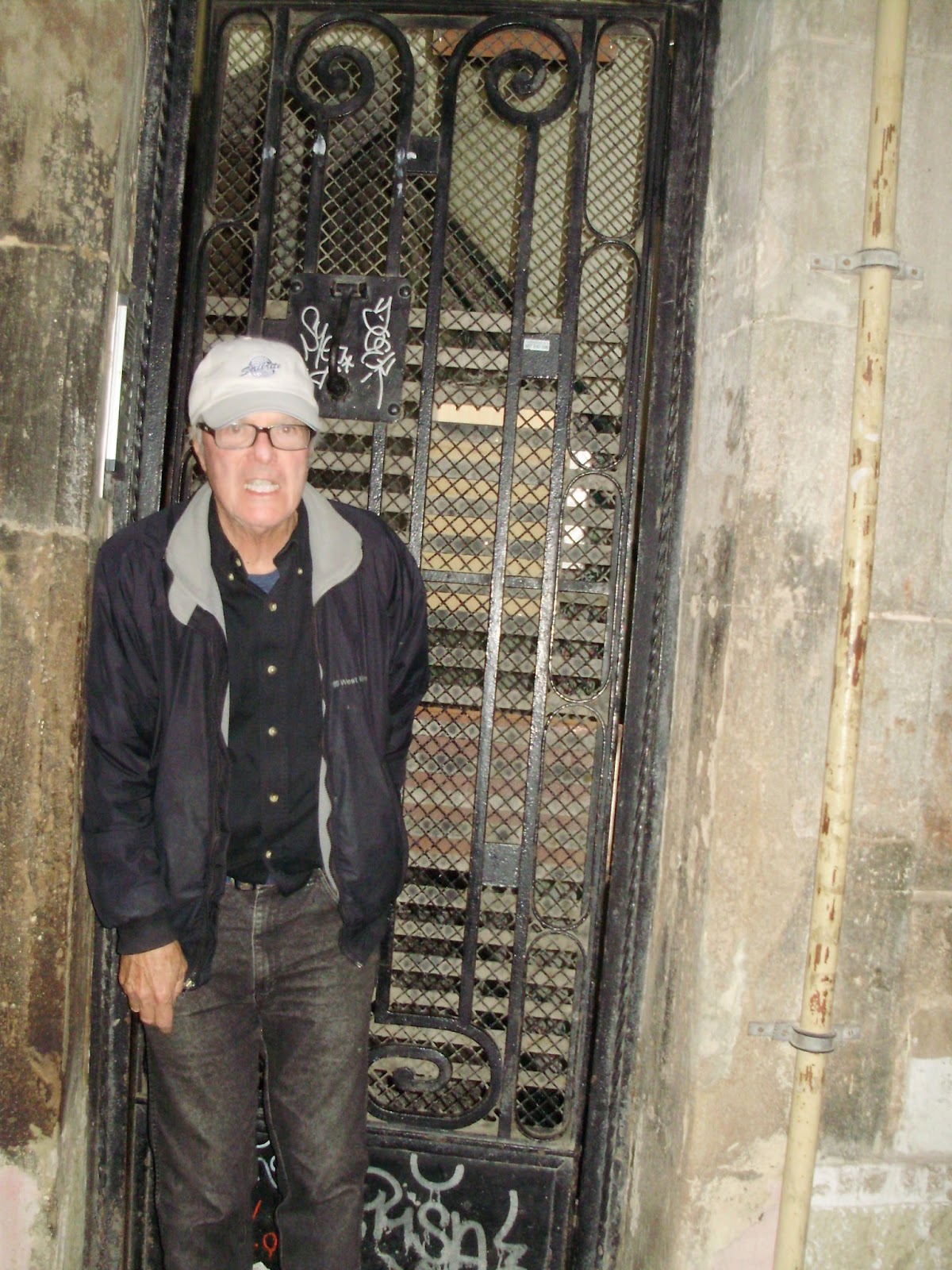 Peeling plaster, rusty railings, and broken window frames in the stairway up to our rental apartment. The heavily reinforced iron door weighs about 3 tons, or so it seems when I try to open it! 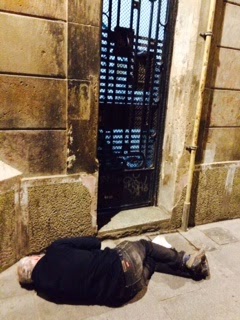 Reenactment of our discovery of a young woman lying at the foot of our apartment building door, in the alley Carrer de Freixures, our first night in Barcelona. An ambulance came for her before I could snap an actual photo.

Of course I didn't know about all these exciting features of the Born area when I reserved the rental apartment via AirBnB. The restaurants and bars do seem to be jam packed late at night, and there is a large, vibrant fish/vegetable/goods market just around the corner. Sort of like Washington, DC's 14th Street as it went through its transition, perhaps? At least the inside of our apartment is decent, though tiny for $120/night. (Welcome to Europe. Fortunately, the dollar is strong so we are getting a good exchange rate for euros.) And our hostess, Angele, is a darling! 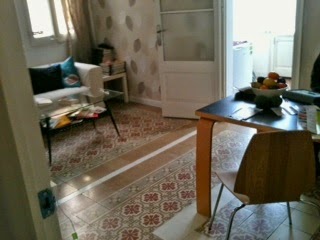 Our tiny rented apartmemt in Born, Barcelona, owned by a French student studying art and design in Spain; notice the white mini-frig behind the kitchen doorway.

We will stay put here for a few days so I will have time to download photos, catch up on this blog, wash clothes out in the sink, and get some sleep. Gosh, maybe I can even wash my hair! The last few days have been a whirlwind of buses, rental cars, sightseeing, walking, trains. We barely had time to buy tickets and get things out and back into suitcases. 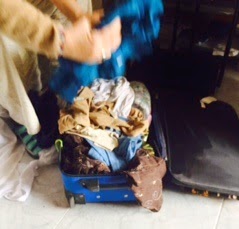 A study in time management: Linda's technique for cramming large things into a small suitcase in a hurry in time to catch a bus or train..

Here's my account of events: Pope was quietly working (and sitting and reading books) alone on the farm in Torrox for a week, doing very little of an adventurous nature, while Linda and I embarked on our intense dramatic excursion into the bowels of crowded, noisy Islamic Morocco. When we returned on a bus to Malaga, Spain, exhausted and in need of a shower and long rest, not to mention some regular meals and strong doses of quiet, Pope had a dozen activities planned for us, starting the minute our bus arrived. He met us in Malaga and we immediately zipped over to the Picasso Museum, then rented a car, raced back to the farm for a quick shower, then out again to the nearby town of Nerja to a film on flamenco dancing and dinner. The next morning, north past the Sierra Nevada Mountains to Granada for a hotel and tour of the Alhambra. 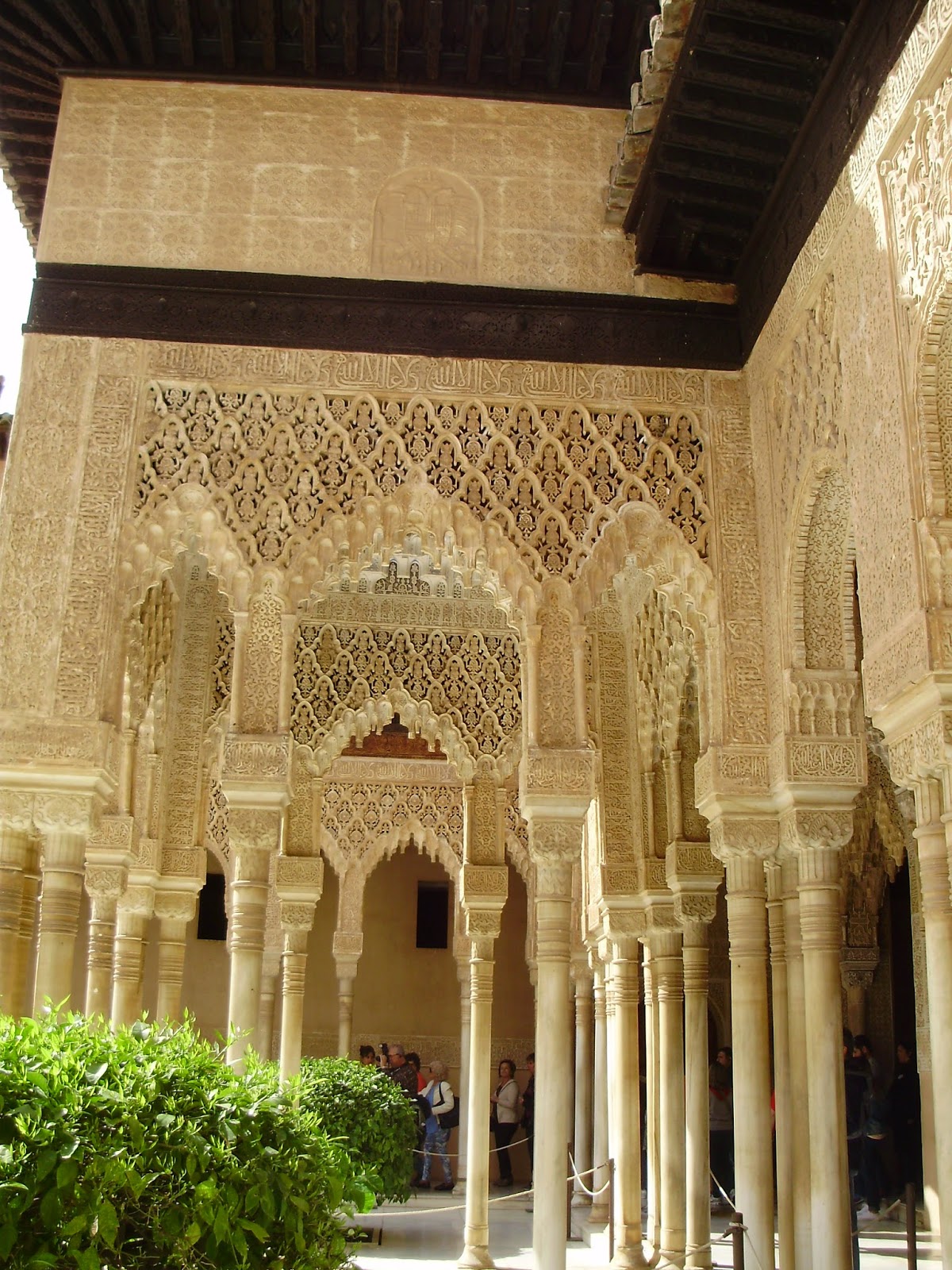 Example of the intricate carvings in the Alhambra, a Moorish palace-fortress built in the 13th-14th century and modified by various conquerors, including Ferdinand and Isabella in the 15th century and Napoleon in the 19th century. 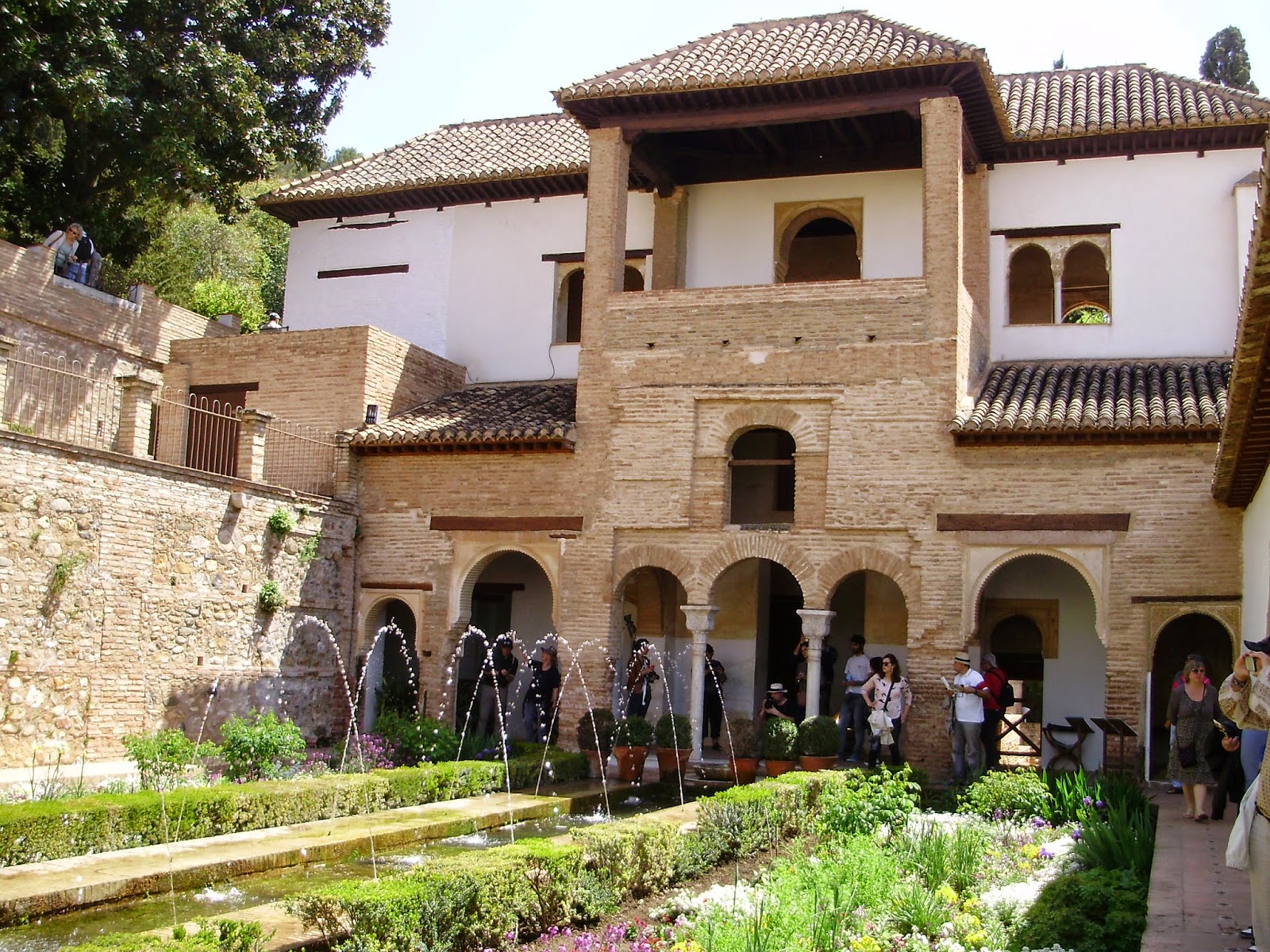 Spectacular water gardens and fountains in the Alhambra, traditionally gravity-fed by water from snowmelt in the Sierra Nevada mountains. 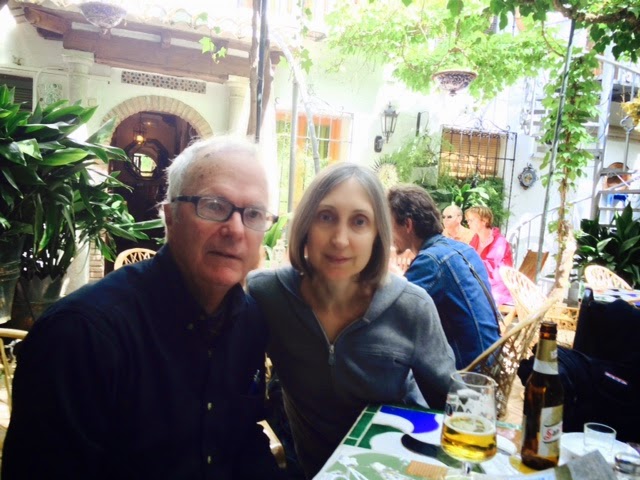 Enjoying drinks and tapas during a respite on a pleasant patio in Granada.
I have to admit, Granada was worth the rush-- not so much for the palace, which doesn't outclass the ones in Turkey, but for the taxi rides up and down switchbacks on Granada's mountain, through tiny lanes barely wide enough for a subcompact (once the driver had to fold in his side-view mirrors!). The lanes are enclosed by stone walls, just to make the journey more dramatic. Naturally, the streets are all one-way. 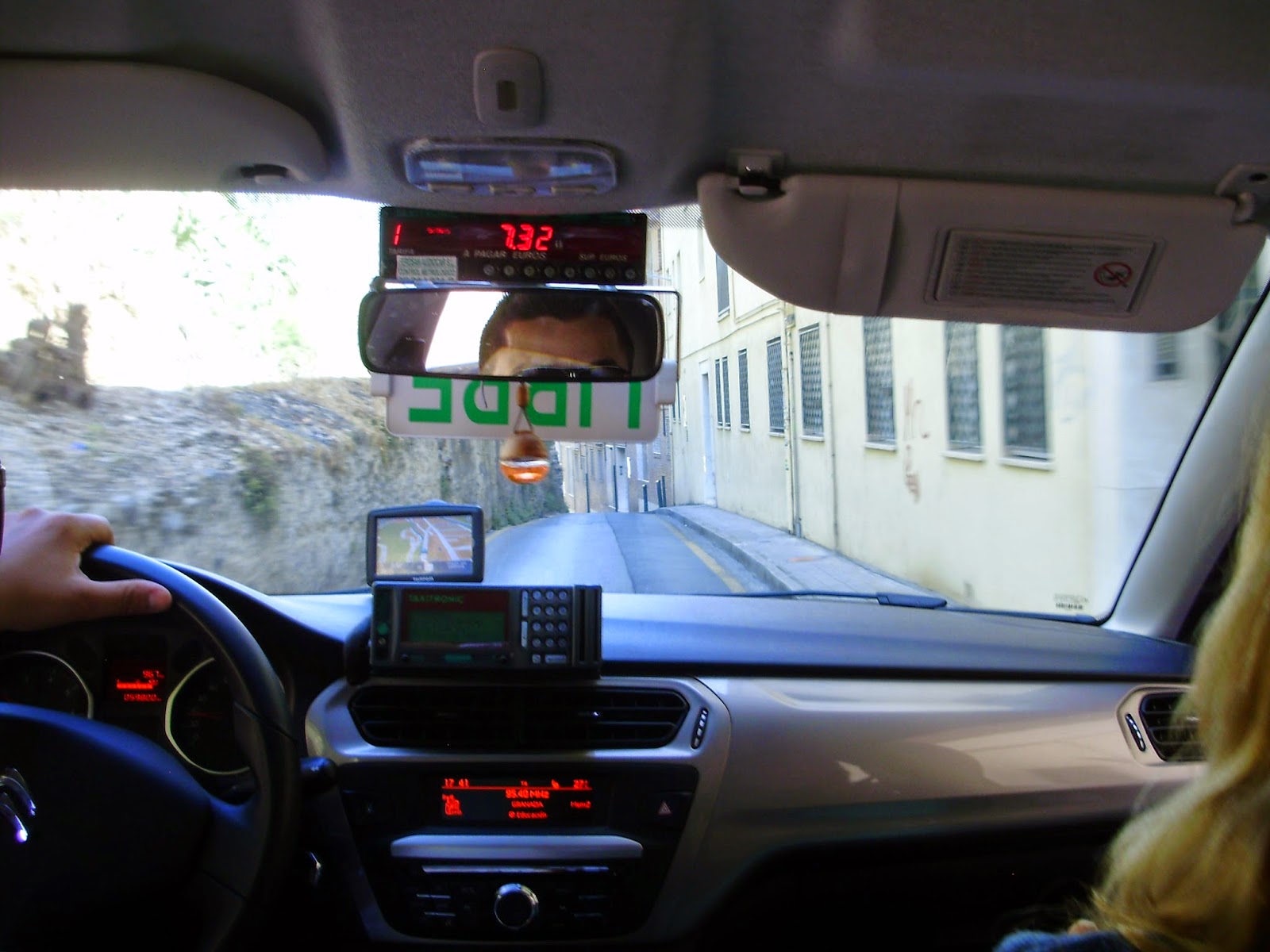 Taxi driver negotiating the narrow streets and hairpin turns of Granada's slopes. This  particular lane is not one of the narrowest--it has a sidewalk! During the most hair-raising sections, I am clinging too hard to the seat to take photos.
The view from the highest point in Granada, called the Mirador, is dramatic. We stopped at a high-altitude restaurant for dramatically expensive drinks and tapas. 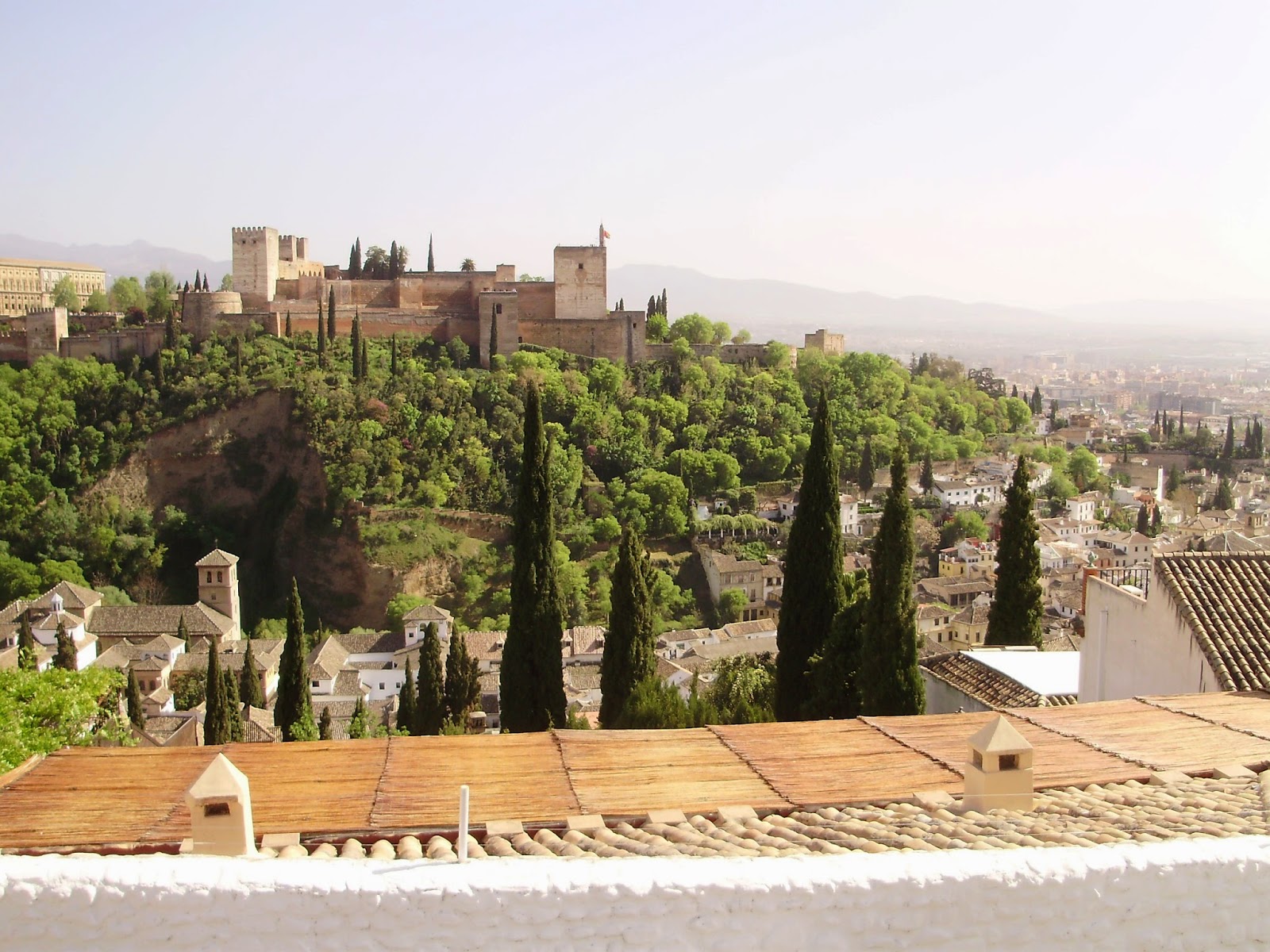 View from the Mirador in Granada; the Alhambra is in the background on top of the next hill.
The next day we hopped on a fast, cross-country train to Barcelona (the only part of the past three days that I had planned as part of our original itinerary). The train speeds range up to 250 km/hour--whizzing past farms, hills, cities, country dwellings, and mosques. After a six-hour journey, the train was 11-1/2 minutes late. 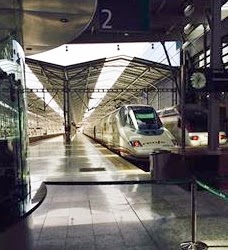 The Pakistani taxi driver was hopeless; even with his GPS he couldn't find our tiny alley dwelling in the middle of a confusing labyrinth of one-way streets known as Born on a dark night in Barcelona. Pope's iPhone GPS saved the day. After trundling up the four flights to our apartment and being pleasantly surprised that the interior was not as bad as the staricase, we hurried out for a late meal served by Latinos and Asians in this multi-ethnic community.
The pace of the last few days was frantic. We got to bed at midnight, and I'm beat. I don't have a lick of clean clothes. This morning I meditated and spent an hour writing my blog while Pope and Linda went out to rustle up croissants and coffee. Now I'm ready to tackle grocery shopping, laundry, and nap. But what's that in the distance I hear? My companions are calling: c'mon, let's go out and see Barcelona!

Posted by my alias Amber Jones Adventures at 5:27 AM