Time for a quiz about the Dordogne River region. 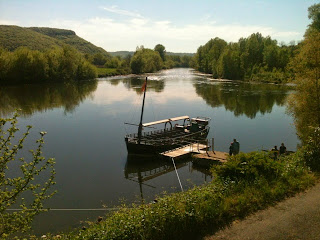 Question #1- How many chateaux, castles, medieval fortresses, Roman ruins, arches, and centuries-old buildings can a traveler tolerate before reaching saturation point? Amber's answer: I love them all and can't get enough of them. Pope's answer: one. 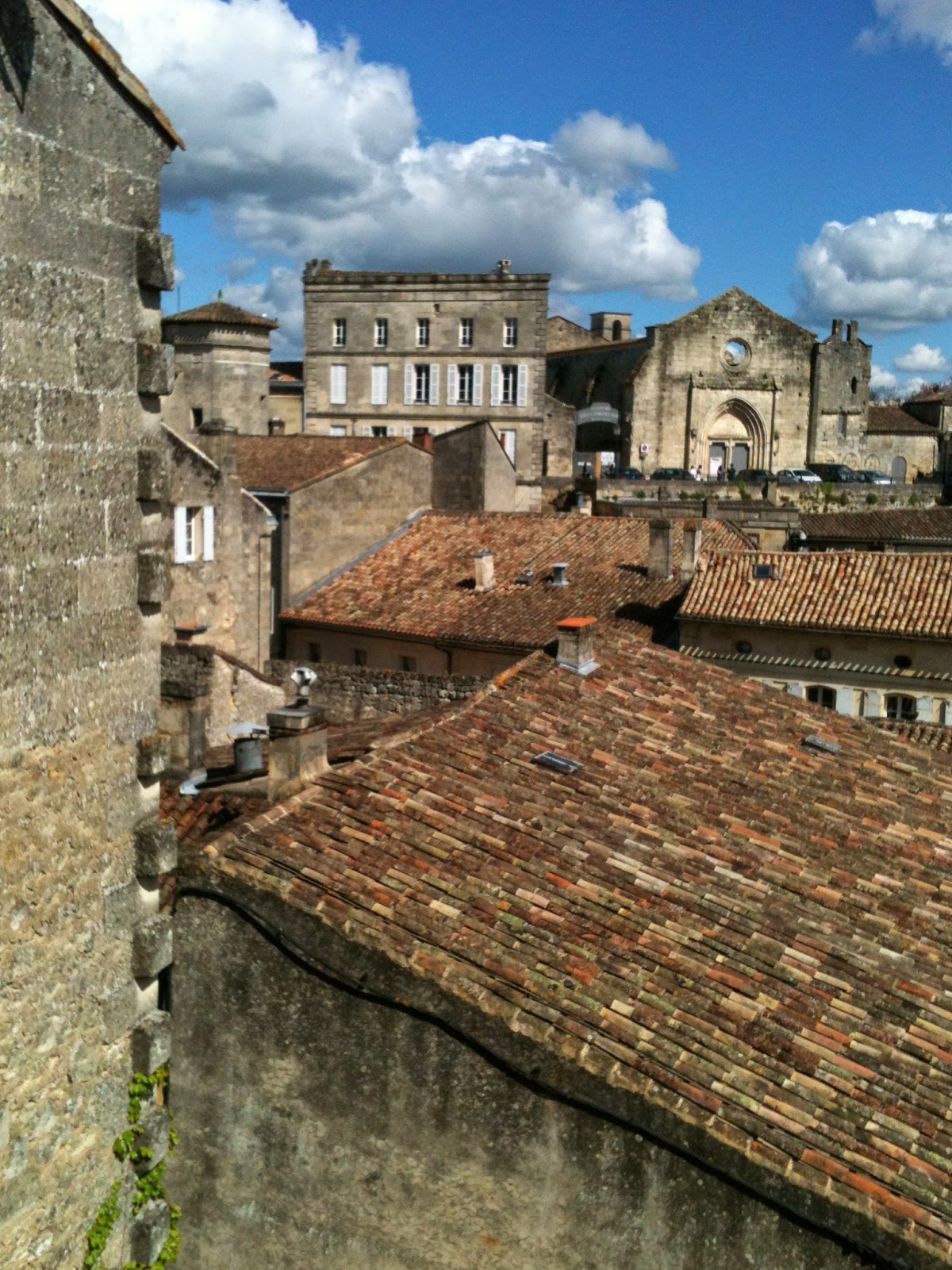 St. Emilion, home of dozens of wine-producing chateaux and surrounding vineyards established by some very successful farmers and merchants from the 2nd to 21st centuries 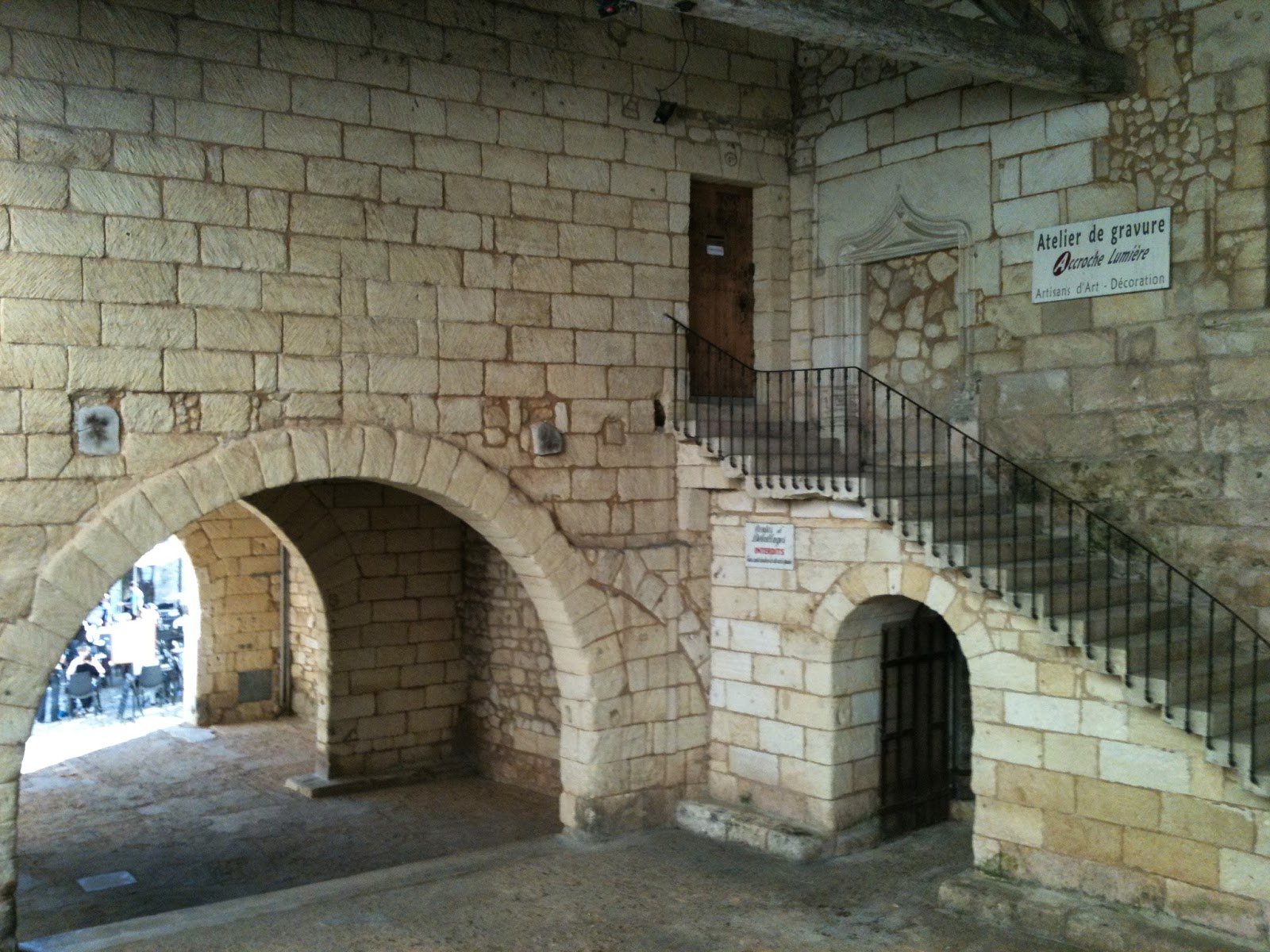 Covered market from the Middle Ages in St. Emilion; probably renovated inside into fancy lofts...? 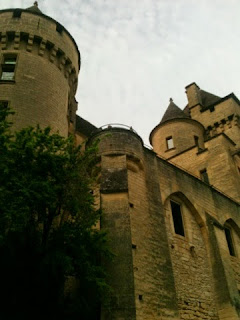 An average-sized castle in Rogue-Gageac, a town built on the side of a mountain. Many of the lesser folks lived in caves. (Or maybe that was in a different era; I couldn't understand the French.) 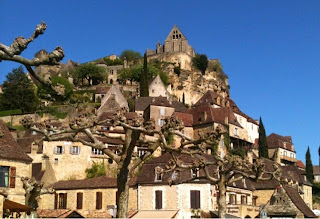 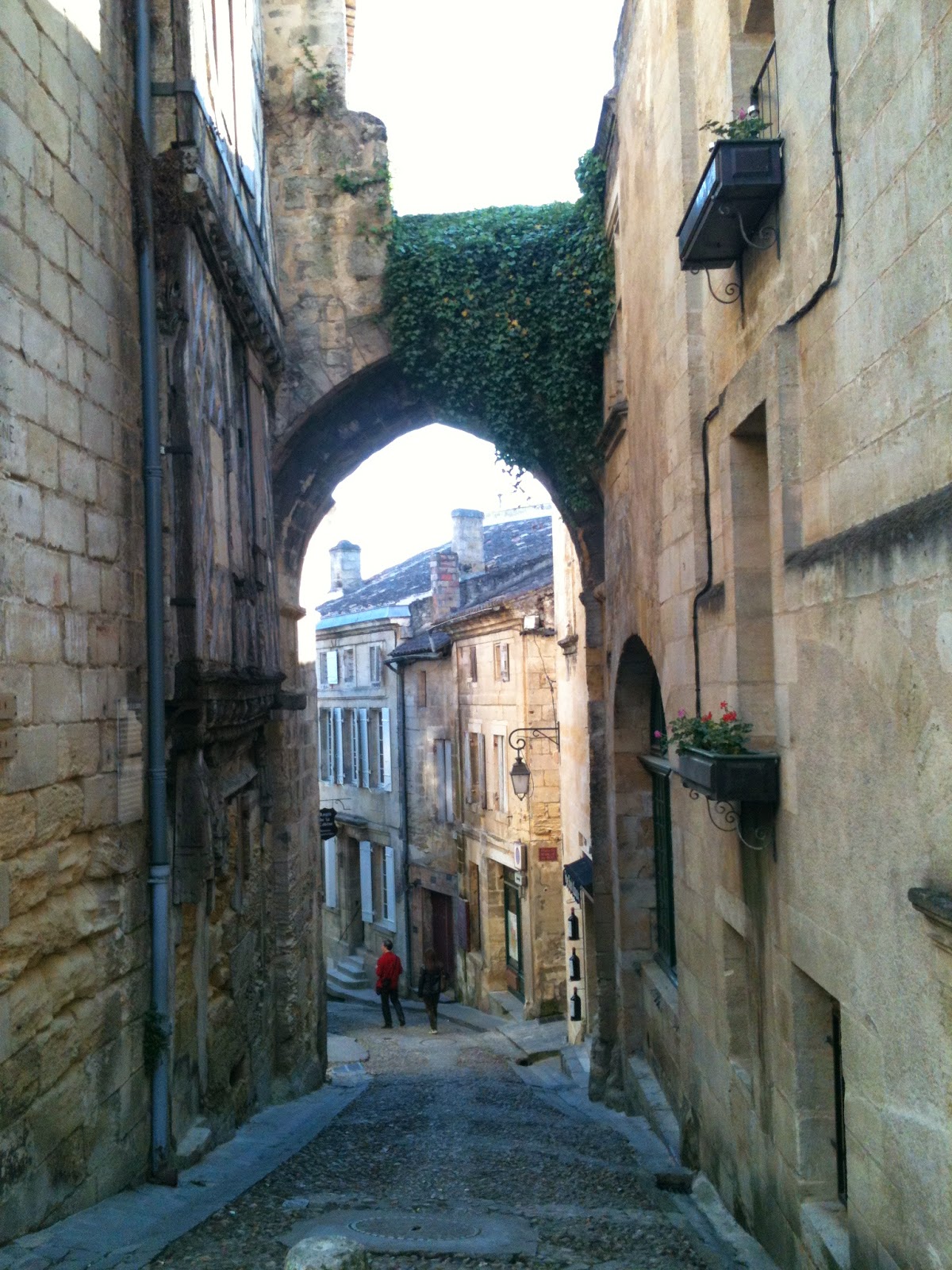 Archway from some era or other in some town in the Dordogne region; they start to run together after while 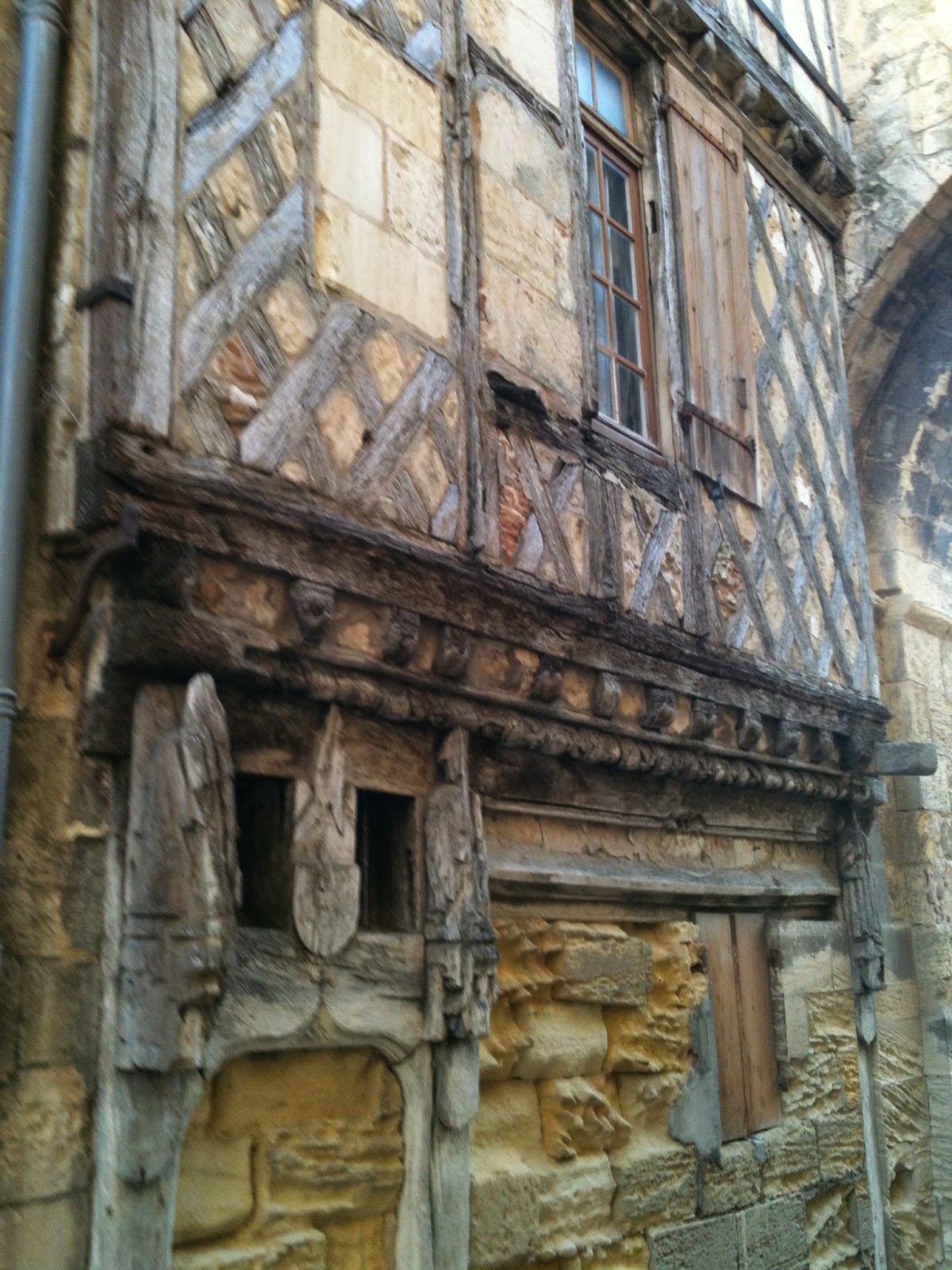 Medieval timbers in Bergerac, possibly shored up with modern concrete for durability...? 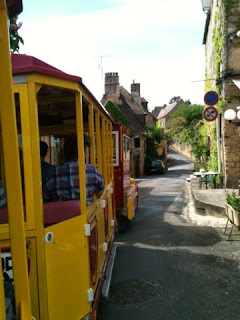 When I got too tired to walk around any more medieval villages, I did the logical thing: hopped on the tourist mini-train, in Dromme. Pope, during much of this time, sat in a cafe and drank wine, like a civilized visitor to France. Or maybe he just took a nap.


Question #2- How many bottles of French wine can one drink to the last drop in two weeks in Dordogne? Amber's answer: three or four. Pope's answer: same as Amber's answer to #1, above. 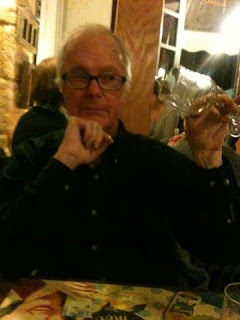 Question #3- What does a traveler do on their first morning in Dordogne? Amber's answer: why, go to the weekly market, of course. Pope's answer: stay in bed and recover from last night's wine. 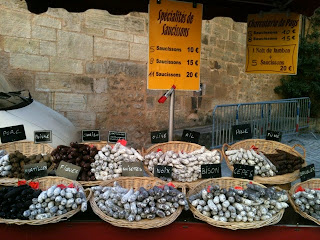 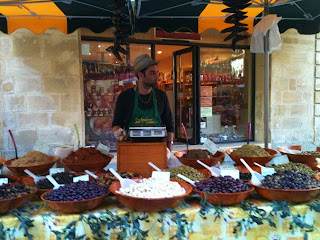 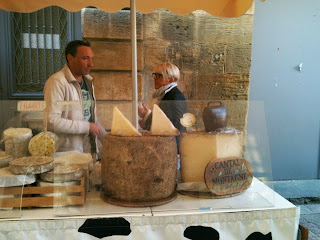 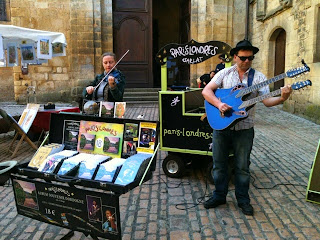 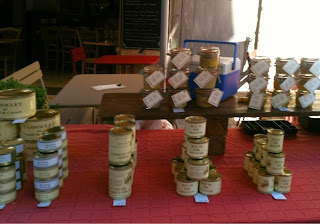 I thought we were visiting Dordogne for castles and caves. But it turns out, in Dordogne, castles and caves are secondary to the regional speciatlty, fois gras--sold in every imaginable form at the shops and weekly market, including cans for safely transporting home in your suitcase (above). There are even postcards showing Madame, farmer's wife, pouring feed down the throat of le canard. When I mentioned to the tourist information lady I was vegetarian, her eyes got very big and she politely mentioned that I might want to visit Paris instead. At the market, however, I found lettuce, asparagus, strawberries, cheese, olives, and nuts--a healthy Mediterranean diet.


Question #4-- Where does one stay when touring the Dordogne region? Amber's answer: why, in a renovated centuries-old building inside a medieval fortified town, of course. Pope's answer: you've got to be kidding! Parking is a bitch and it's freezing cold in those old stone buildings. 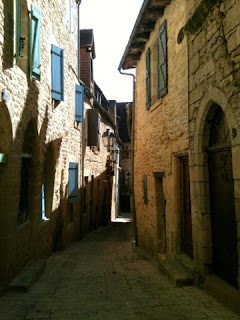 Rue Barry, our lane in the historic city center of Sarlat-la-Caneda; no cars allowed, or should I say, no cars can fit, unless maybe they are Smart-Car-sized minis 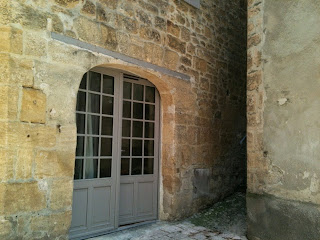 Our doorway, the only access to the apartment and the only source of natural light and ventilation; Pope says he feels like he's living in a cave, like the troglodytes did in this area a long time ago (some people still live in caves here, just like in Morocco) 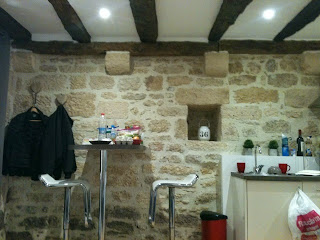 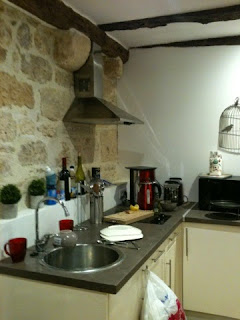 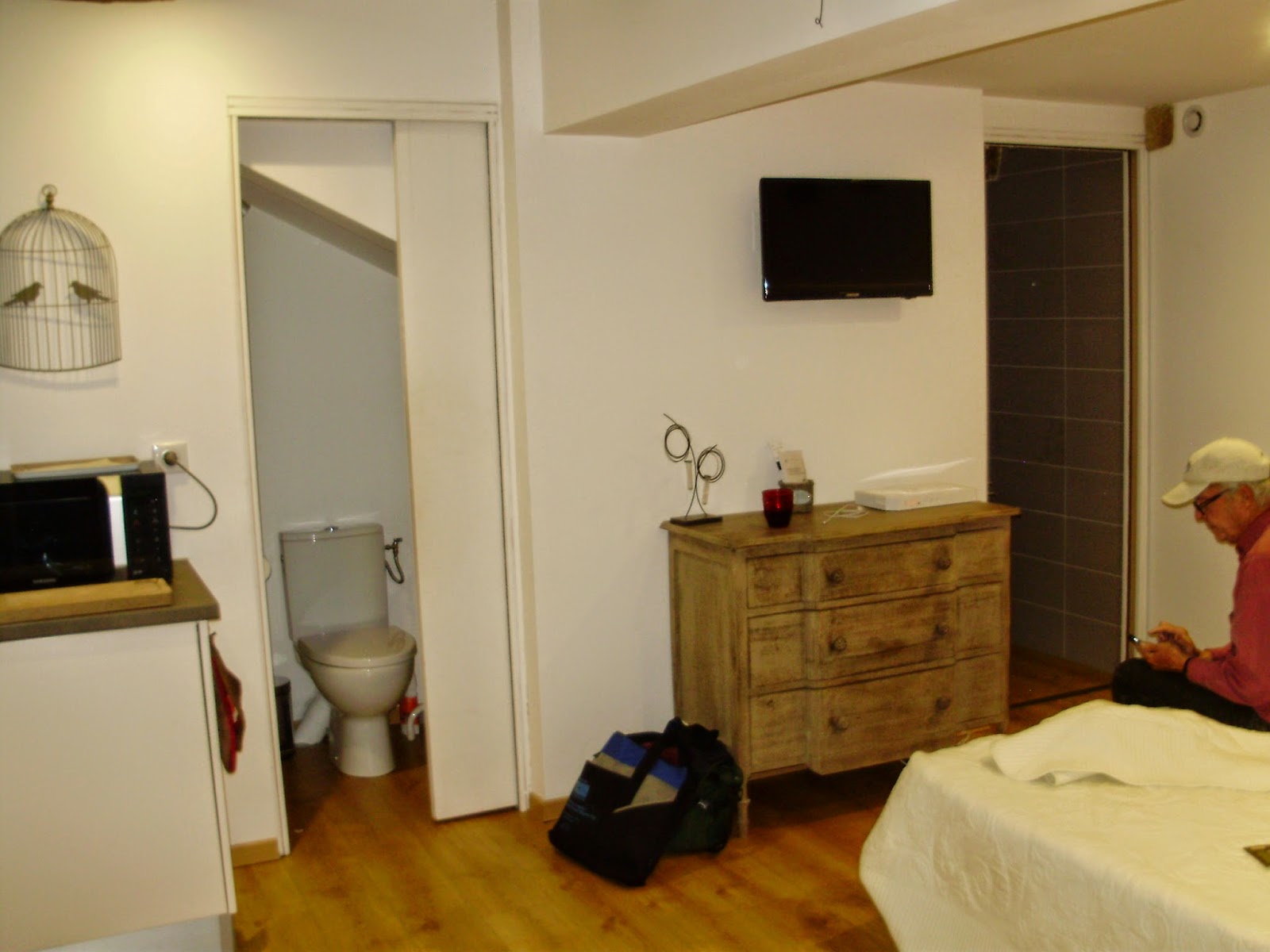 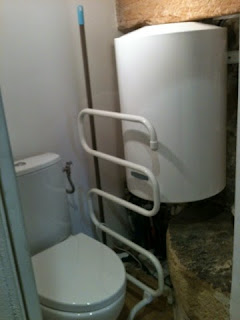 Our rented one-room studio, cleverly renovated to integrate electricity and plumbing and some modern dry wall into solid stone walls and sturdy ceiling timbers. The apartment stays cool even on hot, sunny days. Pope thought our little half bath under the stairs at home was small until he saw this one; yes, that is solid stone over and under and behind the water heater.
Question #5-- What does a traveler do all day every day for two weeks here in Dordogne? Amber's answer: see #1. Pope's answer: keep Amber happy by doing what she wants.
Posted by my alias Amber Jones Adventures at 2:41 PM