After three outstanding preludes (farm in Torrox, excursion to Morocco, and Alhambra in Granada), each of which could have been a vacation all by itself, we have reached our target destination: La France.

I love it here! The atmoshpere, the scents, the people, the scenery. My first three experiences were marveilleuses, and I feel right at home. How many superlatives can I use to describe my happiness?

1. At Avis rental car at the Bordeaux airport, a tres sympathique young lady named Alexandra spent 45 minutes solving a seemingly intractable problem:  the difficulty in getting comprehensive insurance coverage if you pre-reserve a car from home at US prices. I experienced a similar problem in Corsica some years ago, and almost had a nervous breakdown from the runaround I got and disastrous result. This experience was the opposite! I left the counter uplifted, extremely grateful to Alexandra and her colleagues, and confdent that I am thoroughly protected. Pope and I drove off in a fancy RenaultTwingo, a new model of which the French are very proud. Our is a racy brown with a white stripe. 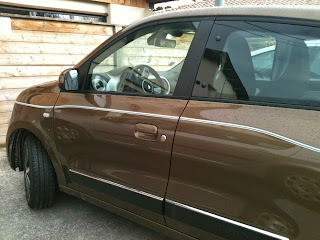 2. Pope found a well-rated hotel in Arès, a small, relatively unknown town on the coast east of Bordeaux. 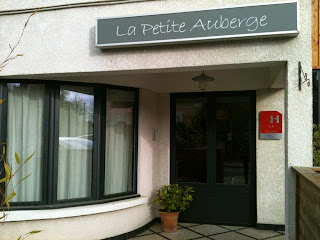 The hotel is beautiful, our room is ultra-comfortable, and the proprietress, Anne-Sophie, is the nicest person! She offered us maps, advice, good service, soft towels and sheets, and friendliness. She serves an above-average continental breakfast. 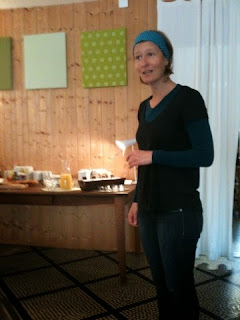 I have been smiling since we arrived, holed up in a cozy room during an intense thunderstorm.

3. We came to the coast to feed Pope's addiction to oysters, and this region came through with flying red, white, and blue colors. Tomorrow we will visit oyster-men at work, just as we have done on Chesapeake Bay. 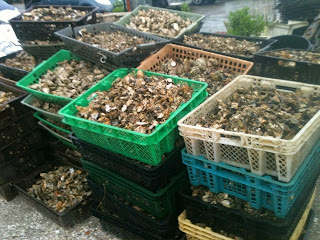 On the menus are local oysters (huitres), a second shellfish called amandes (literally translated as almonds, probably because the shell resembles the coloring and markings of the nuts), and maigre (a white fish), as well as standard fare such as lobster and shrimp. 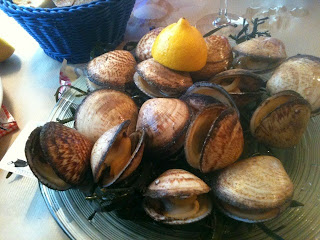 I suspected I might need to set aside vegetarianism on this trip; in Barcelona, I lived on bread and cheese while Pope and Linda feasted on Iberian jambon, and in this restaurant, a baked potato was the only vegetable on the menu.

During notre repas (our meal), le soleil peeked out of the clouds long enough to grace us with a glorious sunset over the Bassin Arcachon. 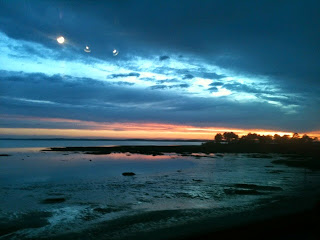 Posted by my alias Amber Jones Adventures at 1:41 AM