What's black and white, and gray all over? Why, it's Amber lying in a Breton hospital! 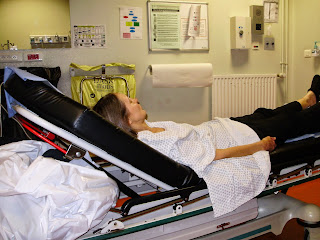 At one time, we thought we would stay in France for a year. You all know what happened to that plan! However, since we are here, we are getting a taste of what it could be like. At this time, we are spending a week on the north coast of Brittany (Bretagne), a beautiful windswept coastline with granite cliffs, medieval fortresses (below), dozens of hiking trails, hearty Breton home cooking, plenty of supermarkets (unlike Dordogne, where we could never find one), and hospitals. 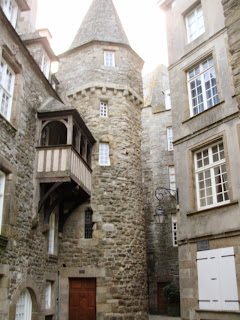 Pope is aching to literally "test the waters" here--i.e., he wants to go sailing. The sea and the multitude of sailboats are calling out to him to try his hand at plying Bretagne's rocky coast in a small bateau. The powerful attraction reminds me of the legendary sirens who entice unwary sailors to wreck their boats on the rocks. We are trying to sign on to a boat tour--one facet of their highly developed maritime system--though the weather has not cooperated so far. 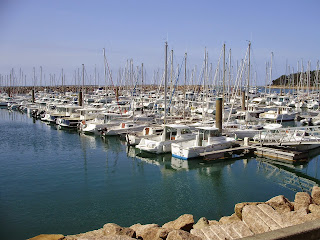 Meanwhile, we explored the hiking trails--beautiful views, nicely kept trails, good signage, and lots of hikers, even on days when the wind threatens to blow you over! The coast of Brittany is a walker's paradise. 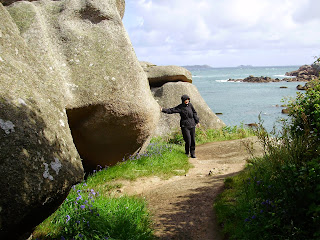 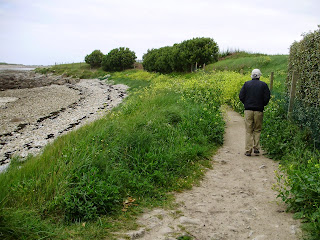 We tested the transportation system--rental cars, taxis, local city buses and long-distance coaches, such as to Mont St. Michel (below). We don't understand many of the road signs, but the directional signs are very helpful. 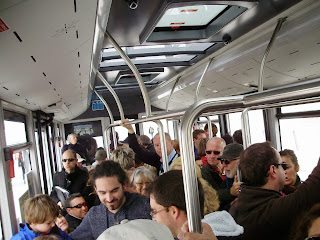 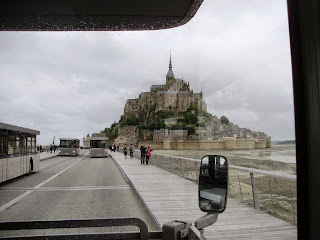 Best of all, we have sampled the regional cuisine, visiting a variety of restaurants and finding them pleasing. (See previous blog post). Pope sampled oysters in every village. We enjoyed three excellent meals in the walled fortress town of St. Malo--Autour du Buerre (the butter place); Tourne-Pierre (the creperie named for a bird); and Brasserie Armoricaine (traditional French). 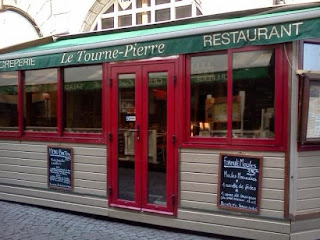 Why not go for a fourth? L'Absinthe was recommended by TripAdvisor, our hotel keeper, and Donna in my French class back home. Three great reviews!

The best restaurants are in the habit of feeding diners little complimentary tidbits before the meal. Of course I am very careful to check the ingredients because of my food sensitivities. 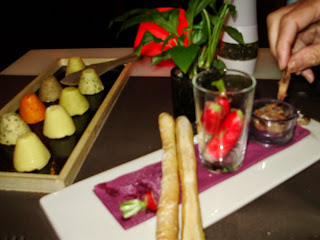 At Autour du Buerre (above), it was crayfish (on my banned list!), homemade breadsticks, and radishes (delicious)--and of course the mounds of butter. Lovely presentation. At L'Absinthe, it was a little bowl of curry containing three types of fish. Of course, I asked about the contents, and heard the words for pollock (ok with me) and salmon (mild sensitivity but nothing serious). I missed the third name; I'll never know what it was. However, I knew that it was not the words for shrimp, crayfish, or lobster, the only seafoods I am serious about avoiding. Nonetheless, I tried only one bite and passed the rest to Pope.

I happily dug into my eggplant appetizer and anticipated my main course with relish. And then, to my surprise and horror, my throat began to constrict! It swelled. And then it went numb; I could not swallow. I felt hot and sweaty, then cold, and began to shake. Feeling faint, I left the table and headed for the door, getting as far as a bench where I laid down to let my blood pressure normalize. (Whether the cold sweat and the fainting spell were an allergic reaction or just panic, I'll never know.)

That's when I decided to test the French emergency medical system. You can't know what it's like to live in a place until you know if you can get to the hospital--or the church--on time!

Short version of what happened after that: A waitress who spoke good English called 999; a  mini ambulance twisted its way through the narrow lanes of the medieval fortified village; one of the EMTs spoke fair English and got the facts straight; and a doctor in the emergency room at St. Malo Hospital spoke a little English. I got an IV through the wrist containing antihistamine and cortisone--I think! I'll never know for sure. 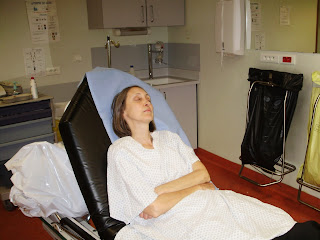 And then  it was over. No paperwork was exchanged, no signatures, no bill, no payment. The nurse even called a taxi for us!  (Though they did ask for my home address; maybe an invoice will wend its way to the USA via air mail.) All very calm and informal. By the time we left, I could swallow, nothing more serious had happened, and there were no clear answers.

A good system? Responsive emergency services, even in the middle of historic old towns. Caring and friendly people. A bit casual--where are the records, the diagnosis, the follow-up, the reassurances? And could it really be free emergency care??? Perhaps I'll never know.

Pope, on the other hand, thought the overall experiment (living in France) came up short. In several instances we have noticed (and we had been cautioned) that French business owners are adamant about making sure you pay every penny you could possibly owe; for example, every tea bag or cup of coffee at a hotel. At the restaurant, while waiting for the ambulance, Pope asked to pay the bill for our drinks and appetizers. They were busy, and he was shooed aside.

But then came crunch time. When he tried to follow me and the EMTs out the door, his path was blocked, and the proprietors quickly came up with l'addition. The ambulance was kept waiting until they ran his credit card and he signed the slip!

Well, at least the food was good!
Posted by my alias Amber Jones Adventures at 10:11 AM