Comedy of Errors on the Westbound Train

This morning, Pope and I met Sally T. on the street in front of her Paris apartment to go on a trip together. We didn’t climb up to her tiny room, because it is on the seventh floor with no elevator (and a shared toilet in the hallway), and we had heavy luggage with us.


Since we were early, we all sat down in a boulangerie for cafe au lait and croissants. We watched several #94 buses go by, about every 5 minutes, headed for Gare Montparnasse (railway station), our destination. No problem. We had plenty of time, and there were plenty of buses. Naturally, when we finished our calorie-laden breakfast and waddled over to the bus stop, there weren't any buses. Not another bus due for 15 minutes. We sat down to wait.


A harbinger of things to come?


In France—and possibly all of Europe—the trains tend to be loooooooonnnng.  Our train location was announced only 15 minutes before departure, and we briskly headed for Track 4.


It was then that I discovered that our seats were not together. Sally was in first class. One of our two second-class tickets was in Car 6, and the other one was a half mile down the track in Car 6. Oops. I hadn’t noticed that when I bought the tickets. Pope glared at me.  How could I have been so careless? It was a really long train! 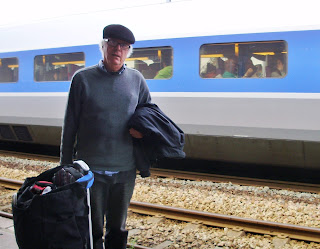 We dropped off Sally at Car 1. By the time Pope and I arrived at Car 6, time was getting short. I grabbed one of the tickets, threw my backpack (with all the lunch food) onto my seat, hauled up the suitcase, and dispatched Pope to his end of the train, saying I would bring food to him later. He gave me a withering look that could have soured milk. By then, the train was ready to leave the station.


Suddenly, Sally came running to my seat—all the way from Car 1 to Car 6!!  Just a few minutes before departure!! “Compost your ticket! Compost your ticket!” she yelled. “Where?” I replied. “In the station!”  Oops.  She grabbed my ticket, ran to the terminal, and in 47-1/2 seconds—a record worthy of Olympians--she raced back to meet me with the stamped ticket, sweating and graciously not  swearing. I had neglected to validate our tickets in the machine! Pope would have to fend for himself. There was no way to reach him; he was way down in Car 16, somewhere just north of Timbuktu. Good thing he has a knack for getting out of sticky situations.


All aboard! The train left the station.


I got out the bread and made cheese sandwiches. I started swaying my way through the cars to reach the back end of the train. Car 7. Car 8. Car 9. Car 10—and I was brought up short by a blank wall! No passage through. Was Pope really over there beyond this dead end, relegated to some third-class section with the chickens and sheep??? Or was he on a different train altogether? 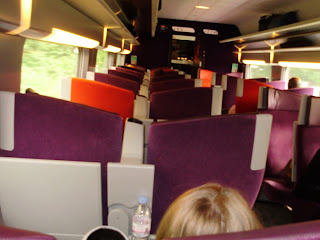 Fortunately Sally had loaned me an old-fashioned cell phone with a French SIM card. I texted Pope. He said (despondently, I think; or was I just reading that into his words???) that he knew about the problem; there were two engines in between our respective sections of the train. After two months of 24/7 togetherness, we were separated by the SNCF rail system.


Hmmm. I felt really, really bad that Pope was all alone with no access to brilliant conversation and, even worse, nothing to eat. Most of all, I knew his no-doubt-mounting hunger would not bode well for pleasant conversation when we arrived at 3:45 in the afternoon.


Then the conductor came by. I smiled pleasantly and handed him a train ticket. “Where is your senior ID card?” he asked in French. 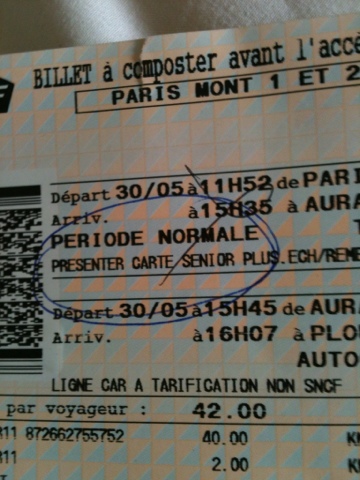 Oops. I had grabbed the ticket we bought for Pope at a substantial discount because he is over 60. I am only 59 1/2. I tried to explain in my limited French that the train was broken in half, I had accidentally grabbed a senior citizen's ticket, and all the cheese was in my backpack.

I must have looked like I was about to cry. Or maybe he misinterpreted my explanation and thought I was a lunatic. At any rate, he responded like a true Frenchman: he laughed and moved on to the next passenger.

Posted by my alias Amber Jones Adventures at 6:30 PM