Where in the World is Old Jersey?

New York was named after England's Duke of York (1664). But how did its next-door neighbor get its name?  In 1667, King Charles II gave a parcel of land in the New World to Sir George Cateret in return for his defense of the crown during the English Civil Wars. Cateret named it after his homeland, Jersey.

Huh?! What, and where, is this original Jersey?

During my brief marriage to a European 23 years ago, I traveled to places rarely frequented by American tourists; in fact, some were completely unknown to me. One of the gems I discovered was this small island in the English channel, close to Normandy, France, governed independently, yet a "dependency" of the English royal family. Jersey is one of the top 10 tax havens in the world, along with Switzerland, Monaco, and Bermuda. 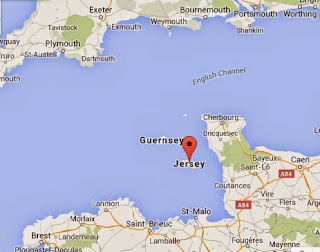 The Channel Islands are sandwiched between England (upper left) and France (lower right)
I have never forgotten the sumptuous food and the monolithic castle that can only be reached at low tide. So when Pope and I passed a ferry terminal on the north coast of Brittany, I dragged him, kicking and screaming, onto a boat bound for Jersey. The island quickly won him over.

We checked into the luxurious Harbour View bed-and-breakfast, 3 times our normal lodging costs at $190/night. This was going to be our big splurge! But the patio was pleasant, a breakfast buffet was included, and from our top-floor room we had a view of the boats stranded in the harbor. 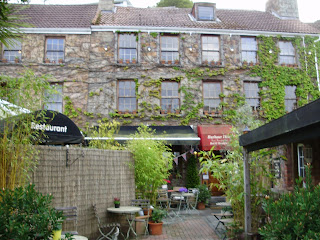 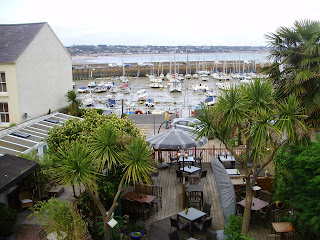 Historically, this island was caught in the middle of multiple conflicts between England and France. Elizabeth Castle is one of the relics, started in the 1600s but frequently modified and expanded by first the French, then the English, and so on. During World War II, Germany occupied the island and heavily fortified the beaches and the castle. As anticipated, Pope and I were able to stroll out to the castle at low tide--about a mile. I was excited to finally see it up close. 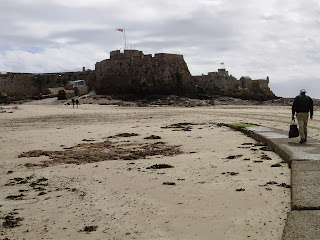 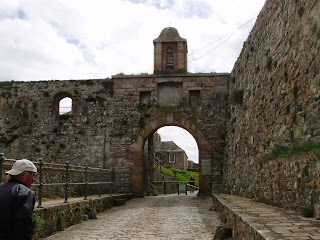 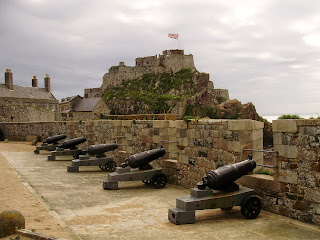 By coincidence, we arrived in Jersey the day before the 70th annivesary of Liberation Day, May 9, 1945, which ended the German occupation. The island's population, and a fair number of British and French, popped over to St. Helier for the commemorative parade, flag ceremony, and entertainment provided by military bands, choirs, poets, and England's Duchess of Wessex. 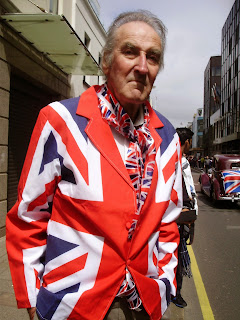 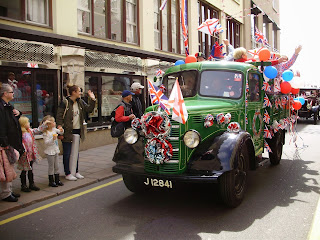 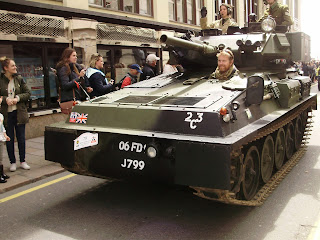 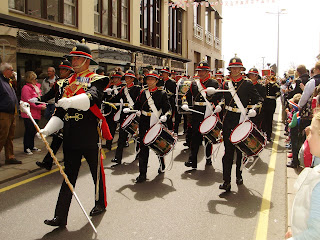 The festive atmosphere was contagious. What really won Pope over, however, was the plethora of sailboats in the marinas, and the way they coped with some of the world's most extreme tide levels--second only to the Bay of Fundy in eastern Canada. At low tide, hundreds of boats sit well above the muck, propped up on keels, with vertical supports bolted onto their hulls. 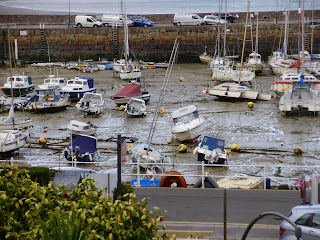 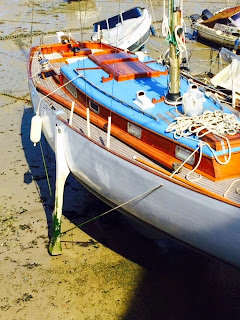 At the lowest tide, the water retreats 2 kilometers from the seawall! Swimming and hiking can be easily combined, for a whimsical cross-training session. Since the water was too cold for swimming in mid-May, we borrowed bikes to explore the island and its lovely gardens. 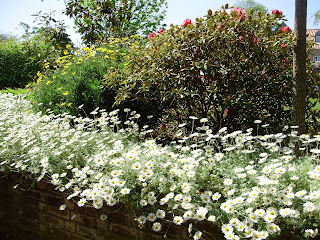 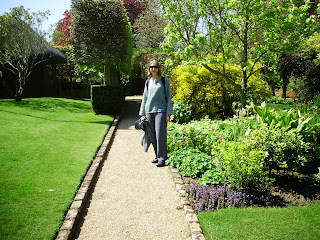 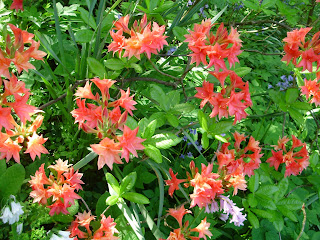 In one lovely garden, our host, Reg--a jolly old fellow!--has made it his hobby to not only enterain visitors with flowers and fountains, but to serve them tea and biscuits, as any self-respecting Jersey gardener is bound to do! 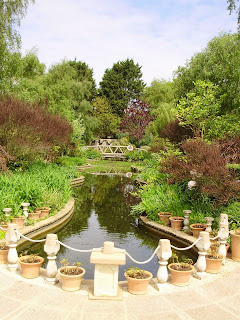 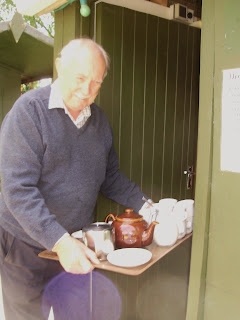 Because of the island's tax status, the steep hills are rife with multi-million-dollar estates with formal gardens--just like the chateaus of France. Young people generally leave for jobs elsewhere because they can never hope to buy a house here. They can't even pay the taxes on inherited property. 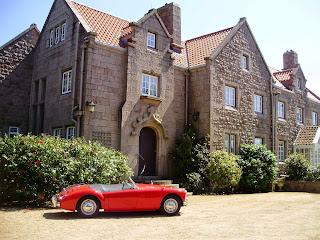 While Pope (being less tender in the lower regions) stuck to biking across the island to see Jersey cows and remote beaches, I hopped on a round-the-island tour bus--along with 27 senior citizens, an assortment of English tourists, and two couples my age dressed in 1940s garb for the Liberation Day festivities. Off we went on a tour of Jersey history. 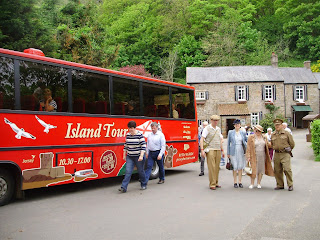 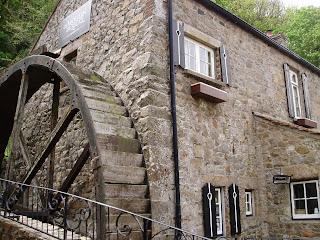 12th century water-powered mill
Surprise! There is another castle on the island. Reading the newspaper and eating creamy Jersey ice cream (6% milkfat) in the town square is a favorite pastime, at least for the retired set, oblivious to the stone monument towering over their heads. 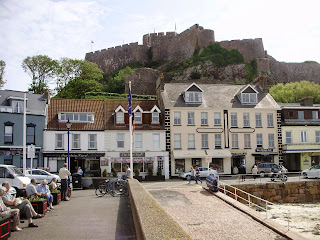 In contrast to the heavily populated (and touristed) south, the island's north coast, part of an ancient volcano rim, is rugged with steep cliffs, secluded bays, and currents that can sweep a wader out to sea in less than 2 inches of water. 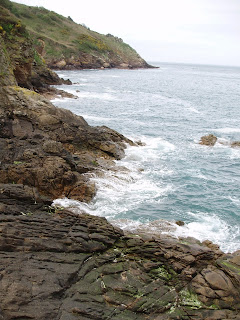 Not to mention secluded grand estates with long winding driveways lined with trees. They share quarters with Jersey potato farmers and with silky brown Jersey "girls," producers of that creamy milkfat. 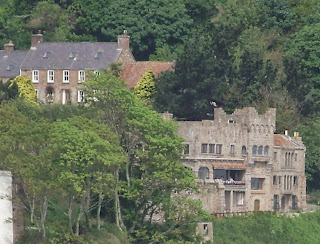 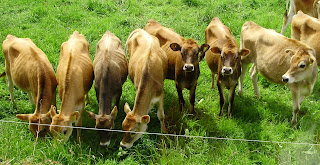 Lots of room to roam on Jesey--half the island is a protected reserve. Hiking trails line the headlands. No need to go all the way to England for granite cliffs, heather, and sweeping views! 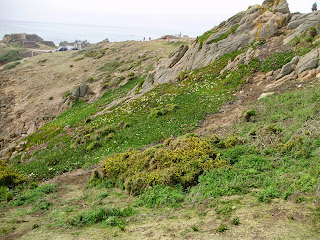 At out lunch stop, the seniors headed for the restaurant "recommended" by the coach company. Having had the foresight to bring a sandwich, I strolled down to the beach for a picnic. The coasts of Jersey are one long beach interspersed with rocky cliffs. 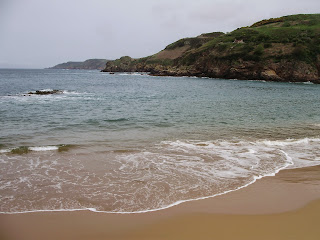 After our obligatory stop at a retail establishment (fine jewelry for the aging ladies), the bus headed round the last bend for one last dramatic backdrop, before dropping me off at my guest house. 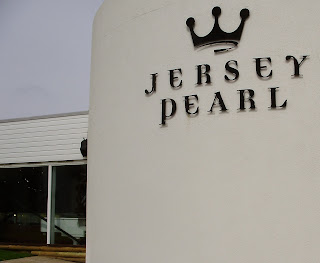 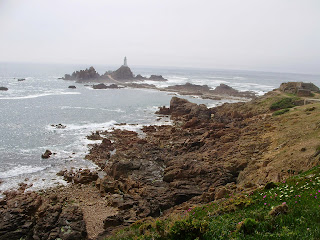 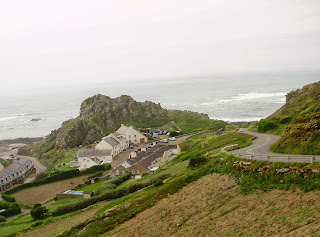 Posted by my alias Amber Jones Adventures at 6:11 AM