Those of you who speak French will know that the two phrases in the title rhyme. I have been having lots of fun practicing my limited French (with my dismally limited vocabulary and horrendous accent) with shopkeepers, restaurant proprietors, and friends of friends here in the City of Light. A fair amount of snickers and snide remarks have been directed my way. 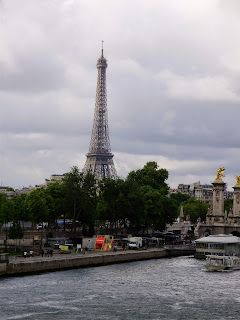 Things have changed here--for me. It has been almost 20 years since I walked the streets of Île de la Cité, climbed the Eiffel Tower, and sighed over “The Hand of God” and “The Kiss” (by Rodin).  My annual visits dried up when my job got busy, I met Pope, and my old friends moved out of Paris. This time, I am revisiting a couple of the same old tourist haunts—Musées d’Orsay and de l’Orangerie. But mostly Pope and I are doing something different--studying the culture and different walks of life, from our base in an apartment with window boxes in up-and-coming Batignolles. 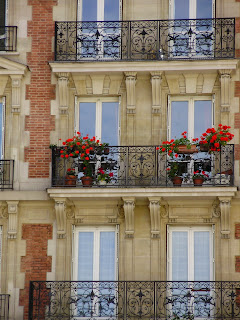 We are trying really, really hard to fit in and not stick out like "ugly Americans." We want to adopt the local culture. Pope even bought a French beret to replace his American baseball cap. Big change, huh? 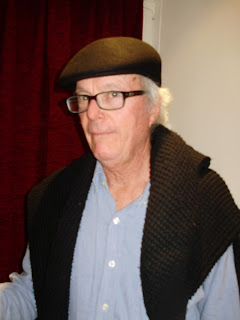 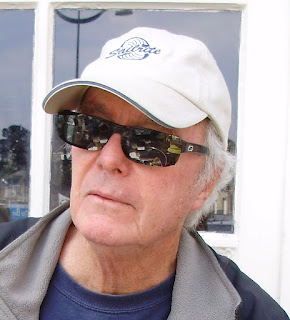 Tea, anyone? Our friend Sally, who lives in Paris part-time, risked extreme embarassment by letting us go with her to Le Zimmer, a traditional grand salon from 1896 with elegant painted ceiling and lavish velvet furnishings. The salon once served writers and artists such as Jules Verne, Sarah Bernhardt, Henri de Toulouse-Latrec, Richard Strauss, Marcl Proust, and Pablo Picasso.


But that was waaaay too old-fashioned for our modern sensibilities! We wanted something new and surprising. So we moved on to another facet of the local social scene, in which we attempted to build rapport over a relaxing dinner in a Paris flat, with two full-time residents, Sally (part-time), and Pope and me, who couldn’t even speak the language, let alone know how to properly eat the white asparagus. Let the laughter ensue—even if sometimes it was directed at us! 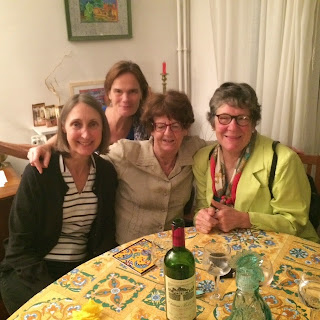 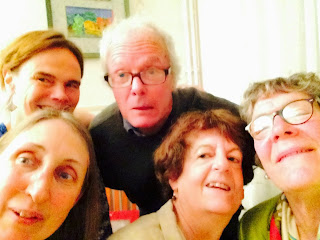 The Latin Quarter? Sooooo passé--and oh, so touristy. Instead, we learned that what’s “in” are the up-and-coming hipster hangouts along Canal St. Martin (gays and marijuana) and the Belleville working-class neighborhood (“the poorer quarters where ragged people go,” where we came across a vibrant Chinatown and at least one hood brandishing a gun). There are local parks where strolling among the trees and shrubs can be a sigh of contentment, and local parks where I wouldn’t tread after 6 pm. 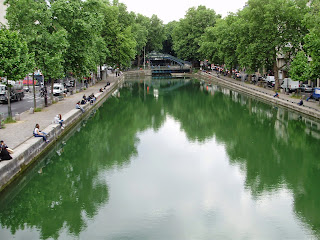 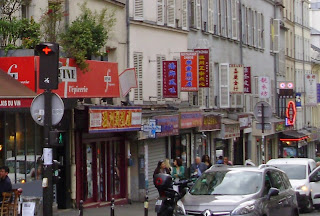 What's "out" are the botanical gardens that are being razed in favor of expanding the extensive sports complex where, on the day of our visit, hundreds of people were lining up for the French Open tennis tournament. 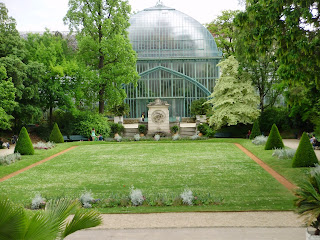 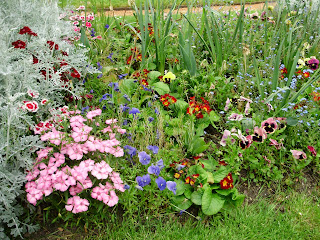 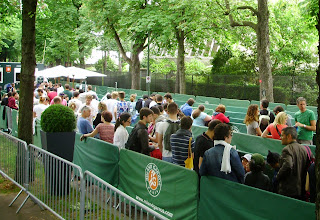 On our tour of urban monuments, we eschewed Pompidou-style modernism and Rococo statues in favor of finding out more about Parisian-style graffiti and the mini parks where homeless people make sure the flowers are well-fertilized. Well, OK, we did make one obligatory stop at the traditional monument at Place de la Republique. But I won’t bore you with photos of THAT! 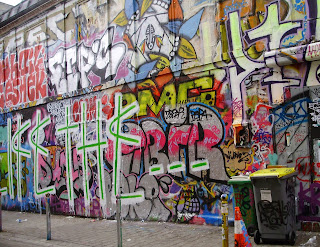 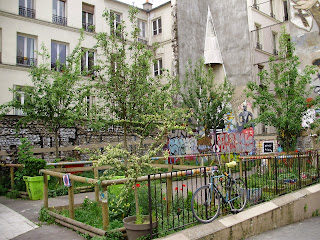 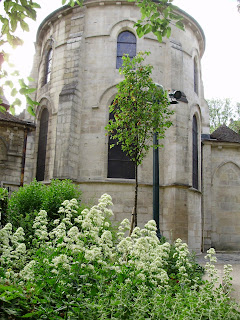 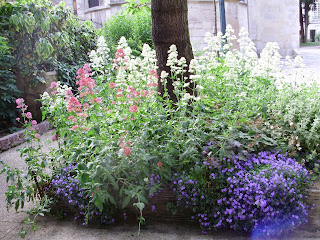 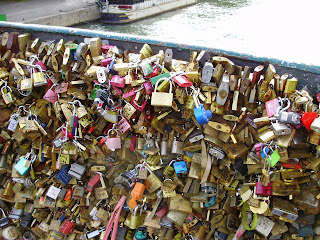 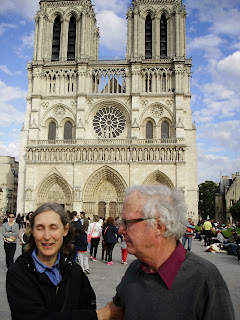 ﻿"Oh come on, Amber, we have to go to at least ONE tourist trap!"


Who knew there were so many people living in houseboats along the Seine? These are not the poor and disadvantaged who cannot afford rent or a car. These are millionaires with 60- to 70-foot monstrosities, any of which look like submarines. Well, a few of them are tastefully decorated. Most have motorcycles, bicycles, and barbeque grills. One had firewood on the deck! 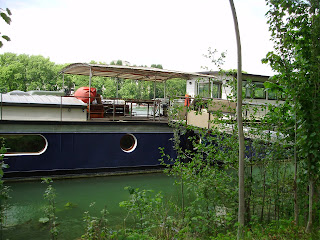 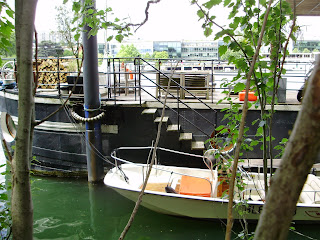 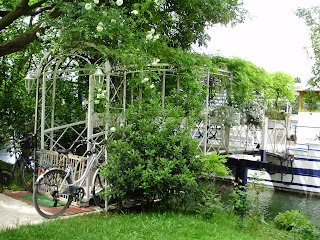 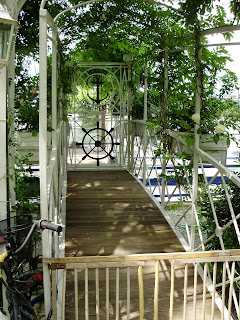 Entranceway to a typical Seine "mansion"


Continuing our effort to "fit in," I carefully studied the proper behavior and procedure at the local laundromat, and then went to sit in a street-side café, drinking $11 beers while people rushed to and from work. I also explored the intricacies of the postal service by trying to send gifts home to all my friends--only to find out that $26 was the minimum overseas postage for the smallest package. (So I'm sorry to tell you, my friends, we are being forced to eat your fine French caramels and truffles because they are too heavy to carry.)
On the plus side, we learned that not all hospitals are stuffy, sterilized germ-warfare factories. In Paris, the public hospital encourages patients to get lots of fresh air and sunshine! They were enjoying their stay so much that Pope tried to get himself admitted, moaning about fatigue and a stomach ache. 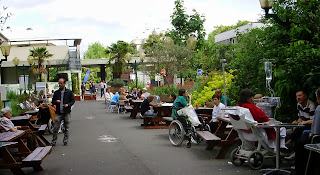 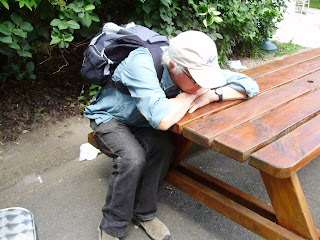 Instead, I should be the one admitted to the hospital, after all the stress I've endured from traveling with Pope.  He's always trying to get us in trouble. One day, he went in search of the reportedly numerous prostitutes, because he wanted to take a picture to show his friends. He found one! While he was running away from the pimp (left), I surreptiously snapped the photo. (In the end, the photo wasn't very revealing, so Pope had to make do with the nude paintings in the museum.) 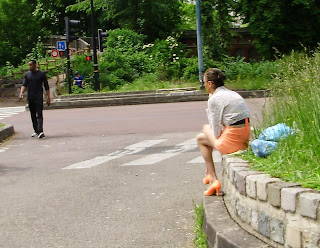 What's on offer in the Bois de Boulogne (right), in broad daylight
﻿ 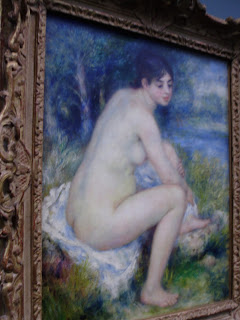 What's on offer in the Musee de l'Orangerie, behind glass
﻿
We haven't finished with Paris yet--we haven't even expereinced the night life! However, I want to take this opportunity to thank part-time Paris resident Sally T., Pope's old friend who is serving as tour guide, mentor, and cultural services counselor, and who also knows where to find delicious melt-in-your-mouth pastries!
﻿

Posted by my alias Amber Jones Adventures at 4:38 PM