That Camel Kicked Me! I Swear It!

Where in the world have I been? Why, to the hospital, of course, being naturally prone to adventures and all their implications, including accidental injury to life and limb.

And off on a wildlife safari, cavorting with a galloping white rhino. Where else would you expect me to be on a rainy day in October following a major injury? 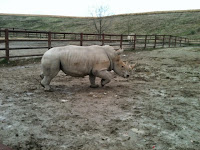 But let's back up. It has been a few weeks since I've posted anything in this space; alas, I have been quite preoccupied. If you followed me on Facebook, you undoubtedly picked up some subtle clues about what I am--and am not--doing this fall.

I am not sailing. (Pope is depressed about all our cruising friends leaving for the Bahamas; please take your turn cheering him up.)

I am not hiking. (I am depressed about missing the crisp, clear, invigorating fall days with the prettiest red and yellow maples; please stop sending me photos.)

Most days, I am holed up on my teal-green sofa, nursing a swollen left lower limb with a broken metatarsal #4 and a sprained ankle. 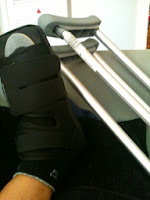 That's what I get for sky-diving without certification! Or practicing judo on neighborhood toughs. Or neglecting to defend myself when the gremlins of Capitol Hill's historic swamp rose from the steam to take out their aggression on unwary passers-by. Take your choice.

From my comfortable yet prone position, I have managed to gain 4 pounds while catching up on my reading and editing the manuscript for a book. (No, not my own; not yet.) I have made a colossal mess of the living room from a stationery sitting position--no mean accomplishment.

Last weekend, I heaved myself off the couch and accepted a ride to Columbus, Ohio, for the Science Writers 2014 workshop, for which I had registered months earlier. Got myself a luxurious "accessible" hotel room with steel bars over the bathtub, and a loaner wheelchair.

And then had a blast with my highly entertaining former colleagues and tale-telling scientists (glaciers are melting and coyotes are invading downtown Chicago--oh my!). I even survived hobbling around on crutches in a 26-degrees-below-zero freezer for Antarctic ice cores. Now, that's determination! 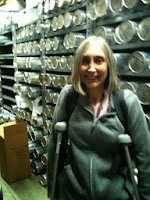 Which brings me to the safari. Some of us more determined writers, always in search of a better story than the competition's, and despite any minor inconvenient injuries, sallied off to The Wilds, a wildlife research and conservation park. We were hungry for a glimpse of some sprightly Sable antelope, baying Bactrian camels (quiz: do camels bay?), curious cheetahs, and slinky African painted dogs. 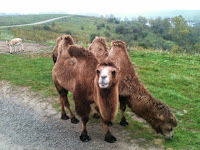 Naturally, it rained on our open-air safari bus. That didn't stop us from getting down and dirty with Thunderball, the one-year-old rare white rhino, who stooped low for an affectionate pat on the head, then skipped off light-heartedly around the backyard, mud flying, like any happy, carefree, 6,000-pound toddler.

A little farther, we jerked to a stop in the bison pasture. My crutches went flying and I went sprawling. Out of the road, ye damn giant beasts!

Should you be sufficiently intrigued to hanker after your own safari, you can visit The Wilds for the day or stay overnight in a yurt with a king-size bed. And make up your own story about a serious injury sustained when one of the resident hellbenders (slimy salamanders also known as "mud otters") chomped down on your unprotected instep. 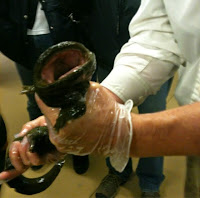 Many thanks to Pope, Sally, Gini, Lisa, Linda, Harvey, Pat, Wendy, Steve, Jim, and the many others who have conspired to turn what could have been a miserable month of missed opportunity into a merry melange of magic, mischief, and mobility.


Posted by my alias Amber Jones Adventures at 2:24 PM No comments:

Who's Having Fun? Not.

Pope wants me to be a sailor, like him. He expounds on the beauty of sunrise, gliding across glistening water with engine off, and exotic shores reachable only by boat. 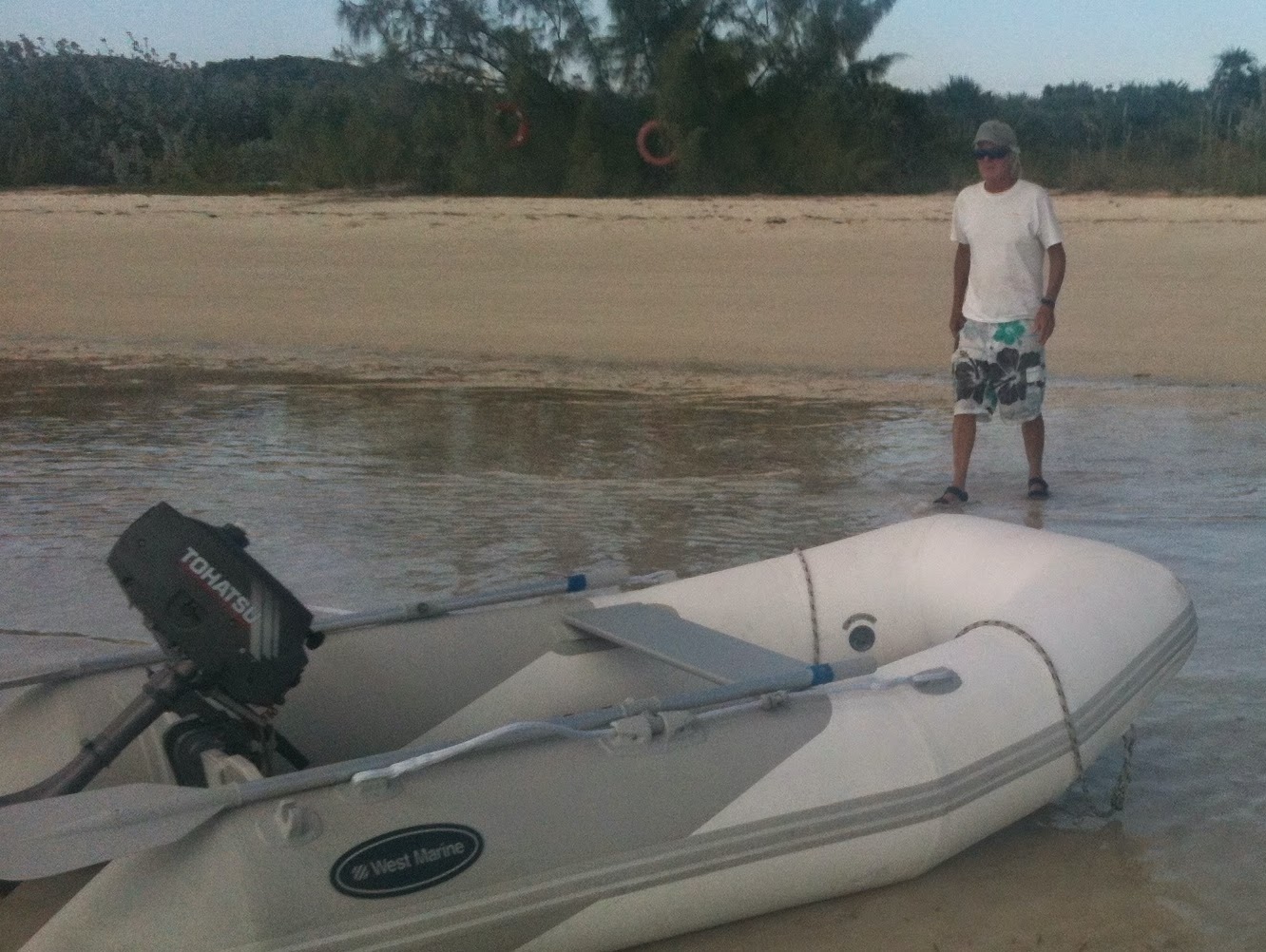 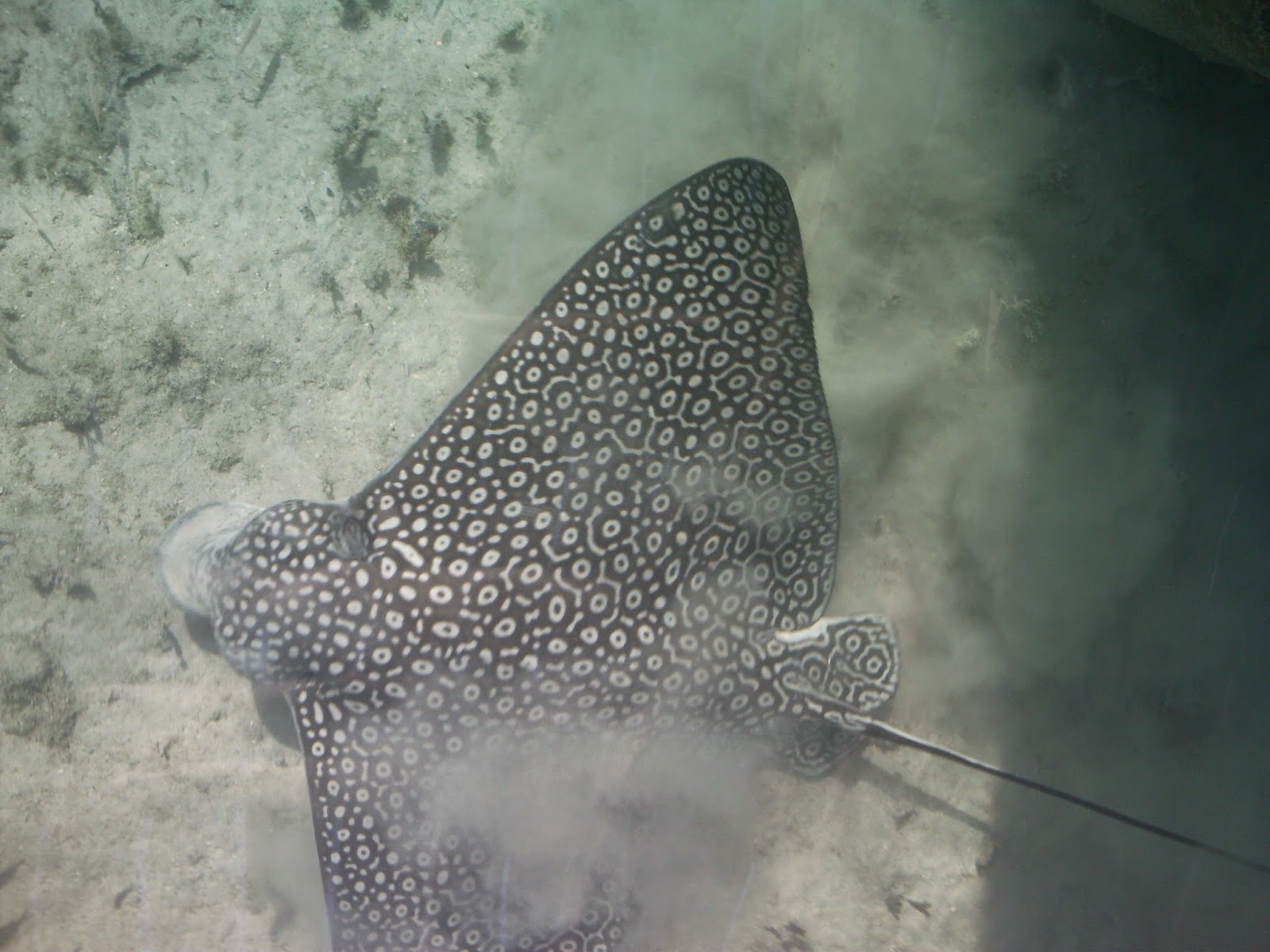 Not to mention elegant, teak-trimmed boats with built-in wine racks.

Enticing, yes? And, indeed, I have seen my share of attractive destinations. But the total experience is often startingly different from the fantasy people envision. You can read about it in this blog; just click on a few of my posts about our winter in the Bahamas. 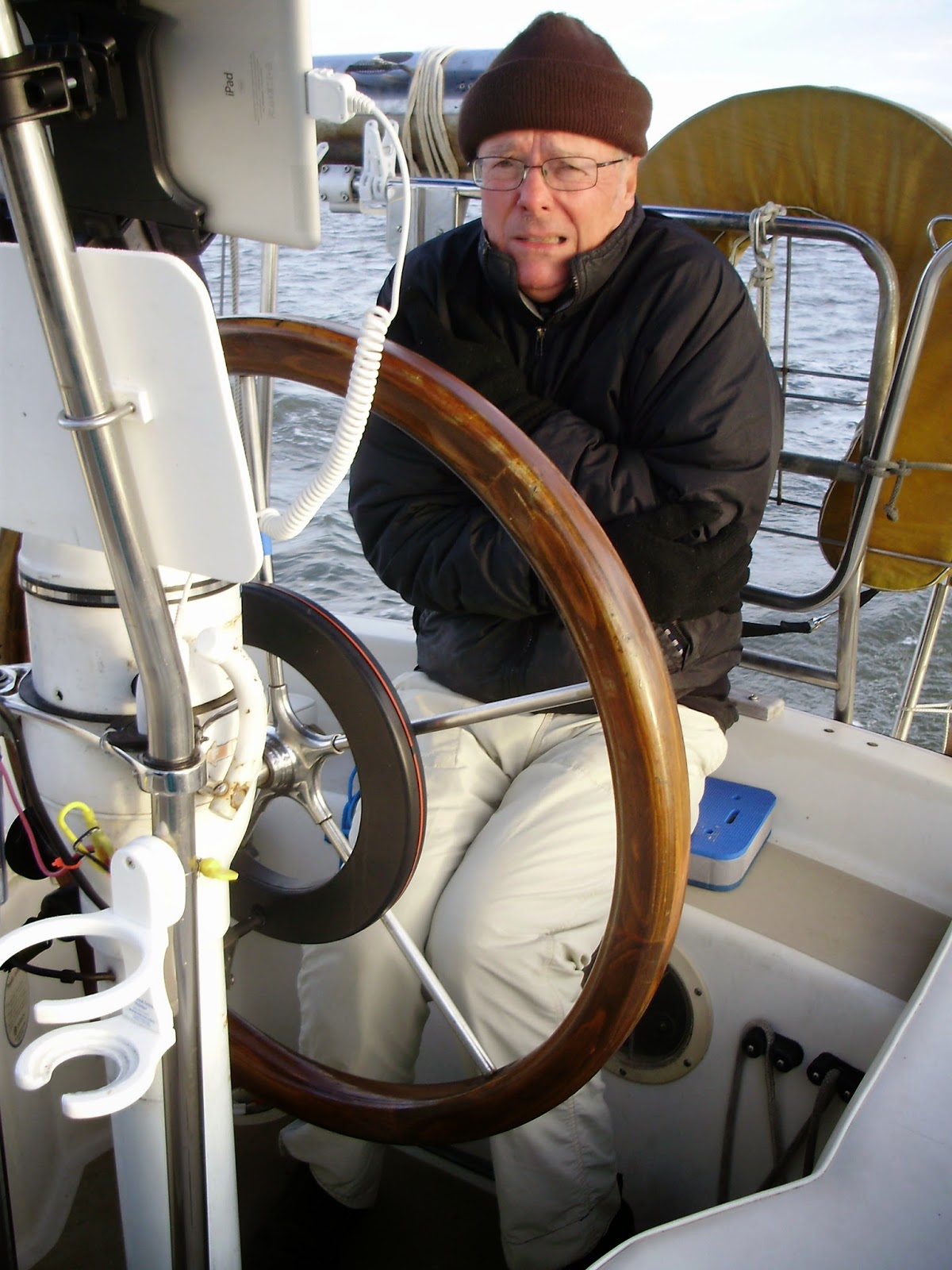 Even in the local rivers and bays, sailing is not always what it's cracked up to be.


This morning, Pope stayed in bed with chills, fever, and a massive headache--unusual for him, being generally healthy and robust. 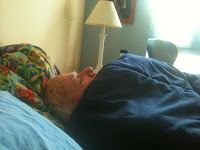 Why so run down? Here's his sad story, about a sailing experience yesterday on the Potomac River.

He was very excited to be racing with a military sailing club--a club that made him jump through 20-foot-high hoops to get in, with their incredibly rigorous standards and tests. The club's boats are operated and maintained by members--supposedly to similarly high standards.

First thing that happened: the third crew member didn't show. (In a military club--what's up with that?) Leaving a crew of two for a race to Mt. Vernon in high winds.

Next: the second crew member had the wrong VHF radio channel for the race announcements--leaving him and Pope in the dark when the details of the racecourse were revealed.

Third: when the wind picked up, they tried to reef the sail--but several mechanisms were in poor condition and failed to hold.

Finally: the boat bumped into one of the logs that often float off the banks of Old Town, tearing the rudder loose and leaving the crew without maneuverability, under full sail in 25-knot winds, just off the rocks near Alexandria.

As I know full well, hauling in sail in strong wind is a challenge for two people, with one of them staying on the wheel. In this case, one person (Pope) also had to hold on to the rudder behind the stern, trying to secure it and at the same time manually manipulate it to steer the boat away from the rocks.

I wasn't there. I can only imagine how panicked I would have been. When even Pope--who adores sailing and sings its praises every chance he gets--comes home traumatized, defeated, and sick....well, my reluctance to take up sailing as a hobby is strongly reinforced.

Who's having fun now? No, not even Pope.

Posted by my alias Amber Jones Adventures at 7:45 AM No comments: