To all of you landlubbers, homebodies, worker bees who may be harboring a wistful desire to embark on an ocean adventure, sailing on a sea breeze: Forget it. Disabuse that notion. Don't listen to those glorified boating stories. Stay home. 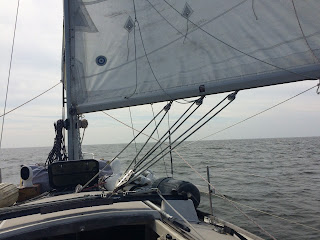 Under sail, under grey skies

It's more trouble to take care of a boat than a house. And it can be damn uncomfortable when it's damp, cold, windy, wavy. This can seriously handicap your vision of paradise. Or, at least, hijack your adventure. 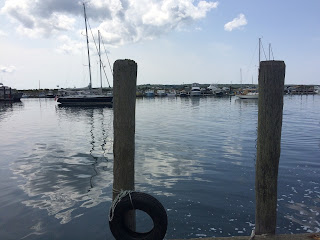 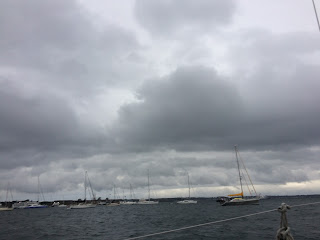 Calm one day, wild the next! As many grey skies as blue ones.

The forecast for Martha's Vineyard (see yesterday's blog) grew and grew until it was out of proportion to anything we had ever experienced: 40-50 mph winds, 17-foot waves!! The harbormaster at Vineyard Haven ordered all boats in the outer harbor to move inside the town breakwater. A few hours later, he ordered all boats to move again, through a drawbridge into a protected lagoon.

Yikes! A mini-hurricane! And no letup in sight for 3 or 4 days, at least not for wind and seas calm enough for us to get to the music festival in Rhode Island over Labor Day weekend. Me? Miss my fourth play date? No way.

So … instead of moving to the lagoon, we fled before the storm, all the way to Rhode Island—a harrowing 7-hour ocean crossing under gray skies. Strong wind at our back generating 3-6 foot waves. The autopilot couldn't handle the following waves, so Pope and I took turns at the helm. With this experienced first mate on the wheel, our boat surfed nimbly up and down the giant rollers. After all, this was my third extended cruise on Echo II. Ocean crossing? No problem.

Just out of Vineyard Haven, a good omen: a GIANT sea turtle surfaced behind our boat! Head a couple of feet in diameter, massive shoulders bouncing above the waves. Wow! 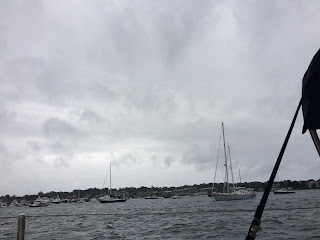 The talisman served us well, at least safety-wise. We anchored in Newport, Rhode Island, at dusk and hunkered down beneath growing storm clouds. Minor hiccups (tongue-in-cheek): Anchor dragged twice; finally set. Too close for comfort to other boats, but too dark to re-anchor. 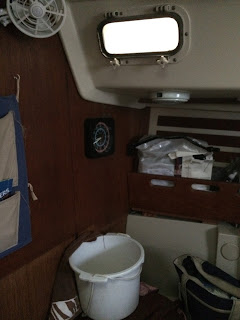 Relentless rain; damp clothes and towels hanging everywhere. Slow drips from starboard porthole and front hatch. Howling wind, but wind forecast here is for only 20-30 mph! Ha ha. No problem. No ice in the cooler, only warm beer and melted butter.

Take my advice: if you want comfort, convenience, a warm bed, sweet dreams, Jameson on the rocks in the afternoon, and hot toddies at midnight, stay home. On dry immovable land. Shut your windows and curl up in an easy chair with a suspenseful novel about a boat in a storm.


Posted by my alias Amber Jones Adventures at 11:00 AM 2 comments:

Out to Sea--Figuratively and Literally

He: I think it's time for US to take our sailboat on another cruise.
She: Oh, really? Where are YOU going?

Giving up and turning around halfway to the Bahamas due to multiple obstacles (see last year's blog) apparently wasn't enough to discourage a serious sailboat skipper. And, once again, he bribed his former first mate with portraits of romance and adventure. (Why does she always fall for that line? She must be "out to sea"...) This time, the carrot was Martha's Vineyard. 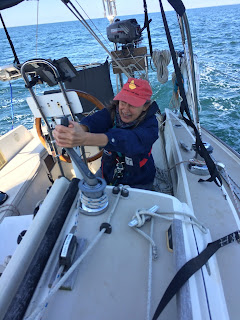 We departed Edgewater, Maryland, August 10, sweltering in our tight quarters in the blistering heat of a southern summer. In New Jersey the biting flies added to our discomfort, and the holding tank leaked into the bilge. (I'll spare the non-boaters the grim description; suffice it to say we spent three days cleaning, disinfecting, and waiting for the arrival of repair parts.) 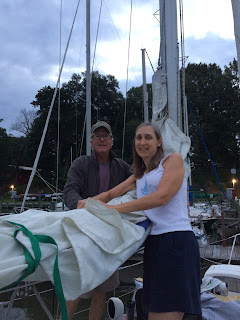 Leaving home marina in Edgewater
In between work, I squeezed in play: a swim and tour of Victorian gingerbread houses in Cape May—partial redemption. 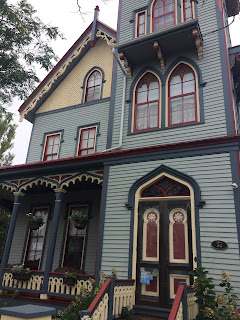 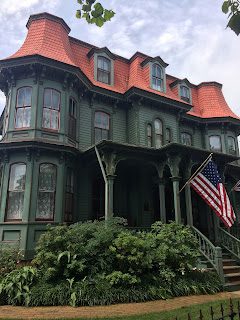 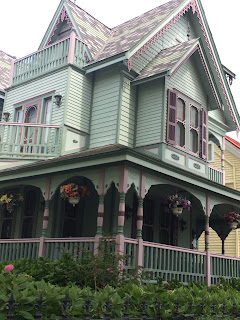 By the time we got to New York, however, play time was over. We sailed all day and all night. The waves ballooned into white caps, and giant commercial vessels—freighters, container ships--shared our space. 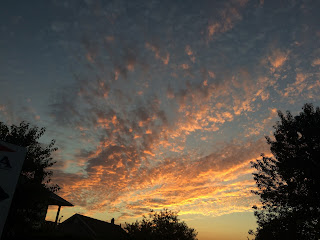 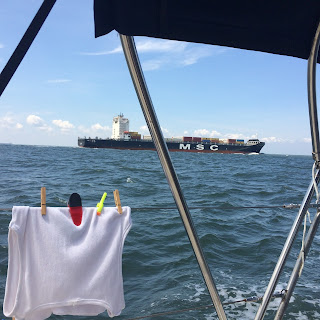 I have to admit it was thrilling (i.e., just short of terrifying) to sail all night and enter New York harbor at first light, dwarfed by skyscrapers and ducking under the Verrazzano, Manhattan, and Brooklyn Bridges. Passing Madame Liberty. 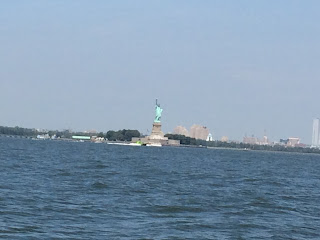 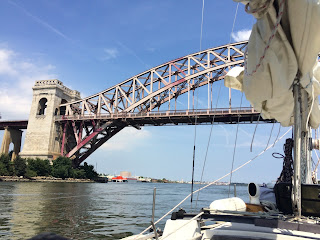 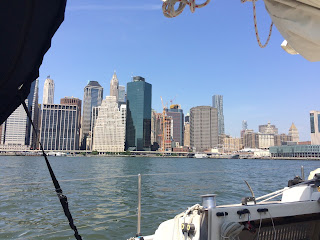 We anchored and explored some lesser-known areas—City Island, an enclave in the Bronx with a small-town feel, and Port Washington, a dining and shopping haven on Long Island. So what if it rained cats and dogs and the boat leaked like a cracked cup? We were seeing the coastal US from a new perspective! Ha ha.

Having signed on to this working tour--oops, I mean cruise--somewhat reluctantly, I insisted on scheduling four play dates: Two visits on the coast of Connecticut to visit yoga sisters (Anita and Betsy) who used to live in northern Virginia and teach at Yoga in Daily Life. The third was a real play: Pope paused for a couple of days while I returned to New York via Amtrak to see Bette Midler on Broadway in “Hello, Dolly.” 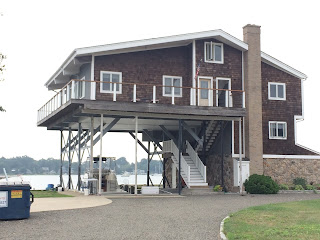 Preparing for storms on coast of Connecticut 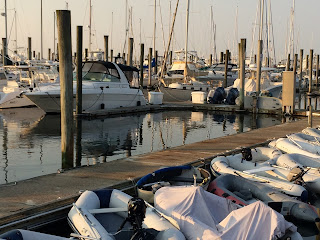 Crowded marina in Mystic, Connecticut, where Pope waited for my return from NYC

The fourth play date is yet to come: two days at Rhythm and Roots music and dance festival, near the coast of Rhode Island, on our return trip.

For now, we are moored offshore at Martha's Vineyard, our final destination before turning around. I was hoping to enjoy sunshine, a warm swim, and relaxing on the beach. We did have a couple of beautiful days. 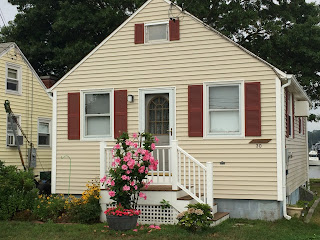 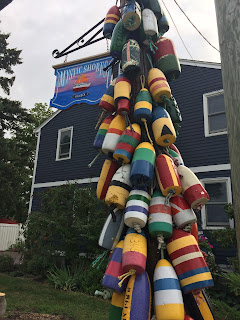 Typical summer cottages on the Vineyard

We bopped around town on bikes and visited a fishing village with a friend who has a summer home here. 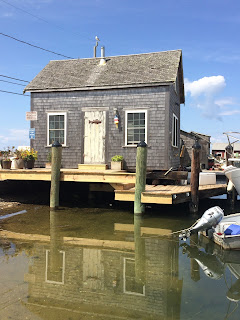 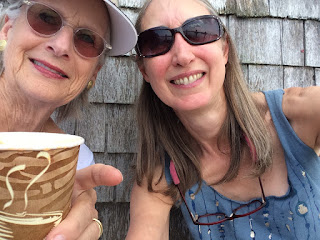 But then the wind blew, the waves grew, and we had a traumatic return from shore one night after dark, complete with blood and multiple injuries, as we attempted to climb aboard our rockin' and rollin' hobby horse from our small inflatable dinghy. Followed by a roly-poly, sleepless night. What's more, it got cold.

Tally: 6 for Amber, 6 for Echo II and weather. (Not counting minor hiccups such as bruises, smashed sunglasses, leaky dinghy.) Why, I'm practically ahead of the game! Or at least not far behind. Tomorrow, though, the wind is expected to gust into the high 30s (miles per hour). In anticipation, already suffering from mild PTSD from our perilous dinghy expedition, we moved from the roly-poly outer harbor of Vineyard Haven (free) to a mooring inside the town's breakwater ($100).

Let the weather come! Our rain gear is ready, and this first mate is an expert mopper-upper and trauma survivor.


Posted by my alias Amber Jones Adventures at 10:53 AM 2 comments:

Most of you know I've been rehearsing for my second career, as a popular, guitar-totin', world-travelin' singer-songwriter a la Lightfoot or Dylan.

"On a tour of one-night stands, my suitcase and guitar in hand..."


Actually, my goals are much simpler: working my way up to occasionally belting out a tune with a local Cajun band, and leading songs at the local Cajun jam session. I have tested my ambition at a couple of Cajun house parties and, just once, in a bar. This summer, I stepped up my game. I plunged into the spotlight (for a brief moment) in a new genre, singing the blues. 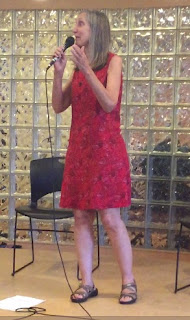 Whoa! Is that ME on stage? With a mike? Hey, all right! Pat myself on the back. Then push the ego back into its cage, because...there's a lot of learnin' that still has to happen before Memphis comes a-callin'.

For the fourth year in a row I signed up for musical training at summer camp, i.e., Augusta Heritage Center in Elkins, West Virginia.The mountains are green, the setting serene. 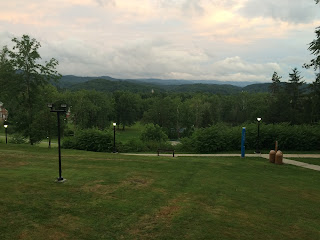 The music is nonstop. Jams in the morning, lessons all day, dancing, playing, performing, and jamming all night. This year, I participated in Cajun Week--my usual genre--AND Country Week, AND Blues Week. A music marathon. (Yes, that's me strumming my guitar in the second photo, next to John R., Cajun band member from Michigan.) 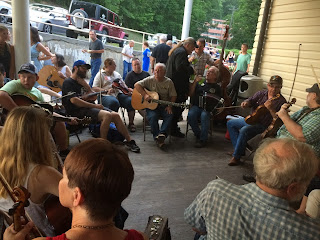 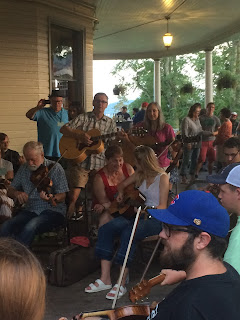 The highlights for me were vocals--building a repertoire of songs in Cajun, country, and blues, and vocals performance workshops--learning to use the mike, lead band members as the vocalist, work with a sound crew, and, of course, build up the courage and skill to step up to the mike and sing.

I think every young guitar player dreams of the day when he or she takes the stage at the local pub or dance hall. I certainly did. When I was 10, my uncle gave me a guitar--bright red and black—and a teach-yourself-to-play book. That was the beginning of a decades-long fantasy: being a bohemian songwriter, nursing a whiskey sour while belting out the blues. Doesn't everyone who picks up a 6-string harbor such dreams?


I learned a few hundred folk and popular songs. I played and sang at campgrounds, church, my living room. But life and career intervened. The guitar sat in a corner, and I slowly forgot all those lyrics. When I retired just short of age 60, however, I vowed to return to my musical roots.

Fast forward to 2017, and my fourth summer at Augusta. After several rounds of guitar lessons (making minimal progress), I was ready to tackle the second half of performance requirements--vocals.


In the past couple of years, I've worked my way up to occasionally singing a couple of Cajun songs with a local band, the Capitol Hillbillies. This summer I added another genre: blues.


I took advantage of every opportunity to practice, under the tutelage of professionals such as Emily Miller, Resa Gibbs, Ian Walters, and Jontavious Willis.

The camp culminated in a performance on stage in front of a friendly audience--fellow students and instructors, Well, ok, I didn't hit all the notes completely accurately, and my voice is still kinda weak, but overall I was pleased to develop a performance style and lose some of my fear. Since Blogger doesn't allow large videos, watch my performance on YouTube, here.

Posted by my alias Amber Jones Adventures at 7:25 AM 1 comment: