Rewards For My Labor: Leaks, Laundry, but also Music and Dance

Readers, I have always been faithful in reporting both the good and bad aspects of cruising, right? See, for example, posts from November 2013 on what it's REALLY like to live on a boat. However, Pope claims my blog is too negative, so when I told him this morning that I was feeling fine, not unhappy to be on board, he urged me to emphasize that in my blog. So I'll give it my best shot.

It's a grey day, drizzling, with a few drips from our cabin ceiling. We are closed up tight to keep the rain out, more or less. Damp clothes hanging everywhere. 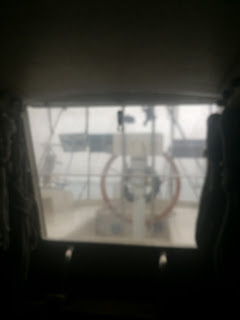 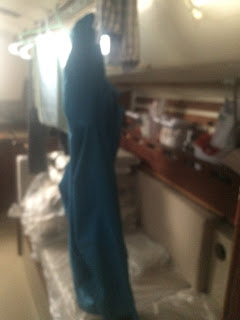 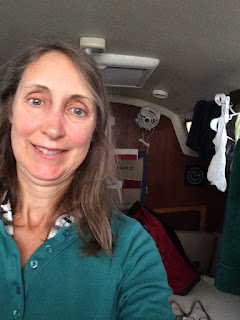 But it's relatively calm in our secluded harbor on the west coast of Conanicut Island, in Narragansett Bay, Rhode Island. I snapped this photo of our boat, Echo II, on its mooring ball, on my way to shore to do laundry and grocery shopping. We turned around at Martha's Vineyard last week and stopped here for a music festival (see below)--my reward for coming on this cruise with Pope, serving as first mate and generally cooperative crew, and handling on-board domestic chores. We will continue south when and if the weather clears. (I include "if" because Hurricane Irma may head this way.) 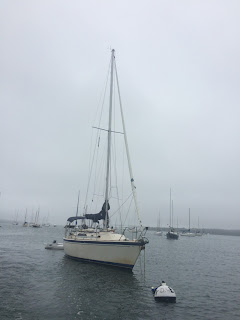 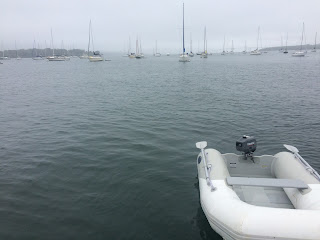 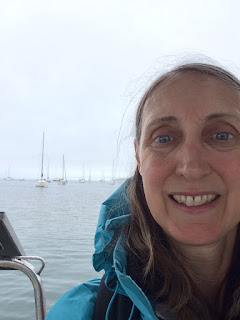 Pope picked an excellent spot to moor for four days during the festival. On the opposite side of the island, in the main harbor of Jamestown, it's colder, windier, wavier, wetter. The ferry to the famous sailing port of Newport, Rhode Island--visible just across the bay--is shut down for the day due to rough conditions. Yet an around-the-island race is taking place outside the harbor. 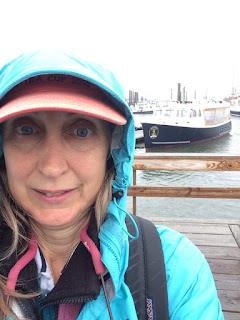 I'm grateful for our protected location, the mild rain (better than thunderstorms), and relatively snug boat (better than camping!). Many of our friends drove or flew to this area just south of Providence, Rhode Island, and are camping out for the annual Rhythm & Roots music and dance festival over Labor Day weekend. I've done it. Sailing is a step up. We have a roof over our heads, running water (from a small tank), can cook indoors, and use an indoor head. No portajohns! Not a bad accommodation, despite the time required to get here and the hiccups along the way, mentioned in my two previous posts. Even returning to the boat by dinghy at midnight in the rain didn't throw me off kilter more than a few degrees.

The festival was loaded with wonderful performers and an eclectic mix of musicians that made all the effort worthwhile. I sampled a dozen performances and discovered some new musical tastes. The musicians swap bands and mix it up, moving around the festival grounds to play together, which makes it more exciting.

Below is a video of an Acadian fiddler from Prince Edward Island playing with my favorite Cajun fiddler, David Geeley.
Texas blues was new to me. Below is a video of Johnny Nicholas, one of my new favorite singer/songwriters, accompanied by fiddler Greeley and members of Los Texmaniacs.

Another discovery was the band Shinyribs, which puts on a superb performance that must be seen in person to do it justice. Video or YouTube won't convey the full measure of their entertainment value. They play in DC on Labor Day--check out their schedule!

And, naturally, there was a lot of my all-time favorite music, Cajun and zydeco, with various band members sitting in with each other. We paced ourselves but still did a lot of dancing over two days. Saw a lot of friends from DC as well as dancers from around the country that we only see at festivals.


The festival continues today but we are back aboard, laboring to prepare the boat for the trip home which begins tomorrow--God willing and the creek don't rise. And if the hurricane veers offshore to a different venue.

Posted by my alias Amber Jones Adventures at 2:23 PM No comments: