The Autumn Leaves...Drifted to the Ground Already 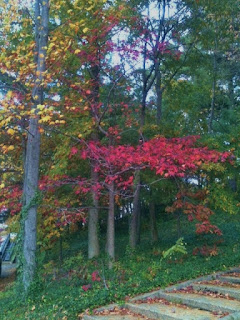 I almost missed the chance to photograph the autumn leaves! They are no longer drifting past the windows; they have carpeted the ground and are awaiting the next frost. The trees shown above displayed their true colors at Holiday Hill Marina in Edgewater, MD, in late October. 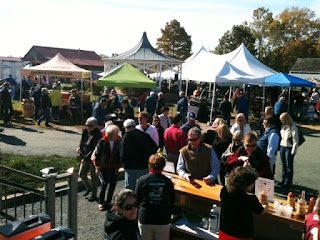 I left you last, dear readers, at the St. Michaels Marina. Four of us--Captain Pope, First Mate Amber, Second Mate Henry (Pope's brother), and Third Mate John--sailed across Chesapeake Bay on Echo II to attend the annual Oysterfest. Pope entered the oyster slurping contest, where ... he got them all in his mouth but didn't win because he didn't get them all the way down his gullet. Too bad; he could have competed in the nationals. 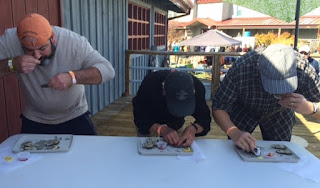 Oysters were not the only attraction. The lanes of St. Michael's were bursting with oranges and golds, contrasted with whitewashed railings and fences of previous centuries. 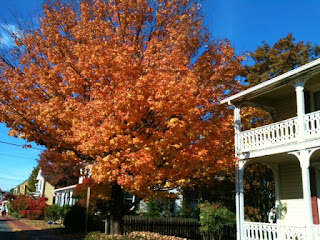 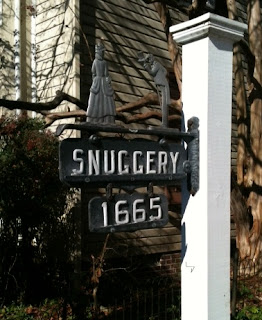 After a chilly night onboard, we left the historic village behind. The day started blustery and cold and warmed to a pleasant Sunday. I bundled up and enjoyed the sail--the sun came out and the boat didn't heel too badly. 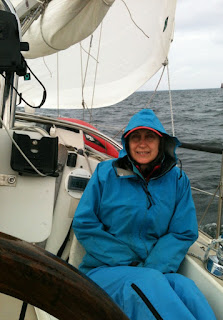 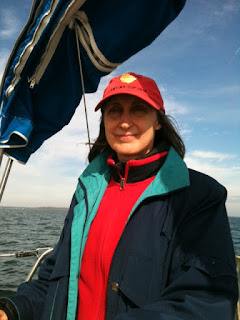 Pope thoroughly enjoyed the sail, because he got to unfurl the new jib sail for which he paid many hundreds of dollars... and it passed its maiden test with flying whites. 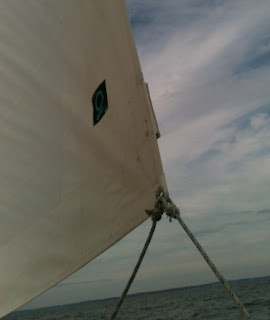 Crew members Henry and John, being veterans of the Echo II inexpensive package deals, knew they could get away with loafing around munching crackers and chatting about old times while the captain and first mate unhooked the dock lines, raised the mainsail, steered the boat, prepared lunch, cleaned the galley, manned the VHF, and ... well, you know, the usual boat chores. 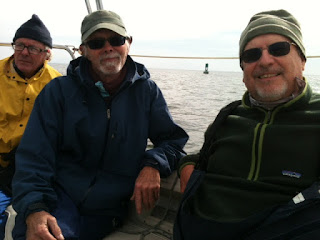 We passed other boats, some with colorful spinnakers, also grasping one of the last beautiful sailing weekends. 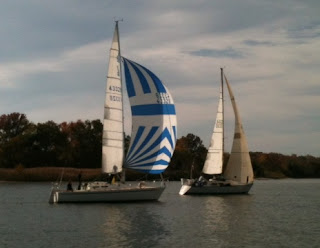 ﻿Back at our marina in Edgewater, we were treated to another colorful display of unmasked xanthophylls and carotenoids (the pigments in yellow and orange leaves). 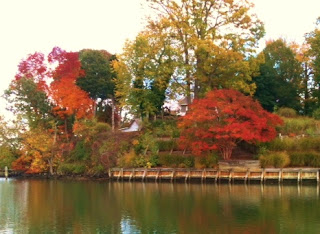 Just as leaves transition from season to season, so, too, do our recreations and follies. The following week, Echo II was hauled out for the winter. 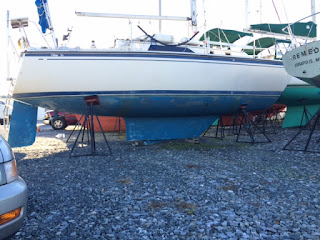 The Echo II crew reassembled on dry land, under the glorious yellow maples at the Barrow farm. Joined by the third Barrow brother Jake, who flew in from New Mexico, they shamelessly scarfed down another large batch of Chesapeake Bay oysters, claiming they can never get enough Stingrays and Olde Salts. 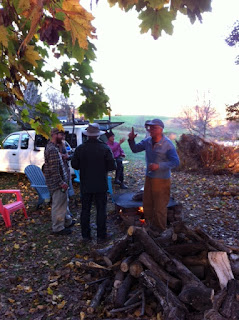 Not being much of an oyster connoisseur, I retired to a leafy meadow with some friends and neighbors to play music (one of my favorite retirement pastimes) while waiting for the oysters to run out and the embers to mellow to the ideal marshmallow-roasting stage. 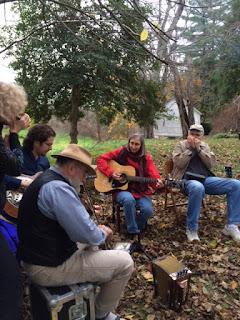 It wasn't long before autumn transitioned into the chilly temperatures of early winter. The house is creaking and I sit next to the radiator, blogging away about nothing more exciting than autumn leaves and oysters.
Some of you know that I had been planning to regale you with tales of my adventurous drive to Pensacola, Florida, stopping to hike in the Tennessee mountains and to visit a college friend in Asheville, NC. The trip was cancelled by my traveling companions due to that scourge of aging--medical issues. So I remain in DC, ensconced in a heavy sweater, consigned to strumming my guitar, lifting weights at the gym, and writing about the reds and yellows on the ground outside my window.
Posted by my alias Amber Jones Adventures at 1:21 PM No comments: