I know I put it in here somewhere! Darn, it's crowded. 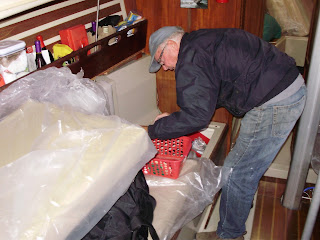 Tight fit in Echo II's quarter-berth: food, galley supplies, linens, rain gear, clothes, folding bike. The only substantial storage area on the boat. I love plastic bins. So organized. Pope hates them. (But he always asks me when he can't find something anyway.) 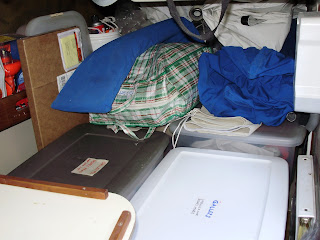 Let's see, does this one go on the port bunk? Or is it part of the dinette back? Let's leave the plastic covers on the cushions, please, until we get the leaks fixed. 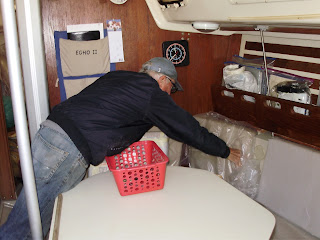 Pope's brother Henry uncovers the sail (note the spiffy new sail cover in elegant navy blue) and adds some reefs to prepare for 25-to-30-mph gusts. Henry will accompany Pope on the first segment down the Chesapeake Bay to Hampton, where the deck leaks will be re-examined for alternative solutions, since Plan A didn't work all that well. 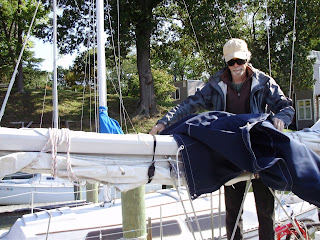 Pope and his brother Henry puzzle over how to get the boat safely out of the narrow slip in unpredictable winds. 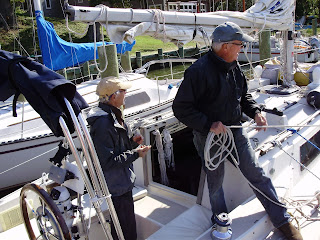 The sparkling water in Whitemarsh Creek belies the seriousness of the wind. Note the pilings surrounding the narrow boat slip, the proximity of the dock next door, and the tiny turning basin: a slalom course on a gusty day. Add shallow water, with less than a foot under the keel at mid-tide, and it becomes even more important to get it right the first time. 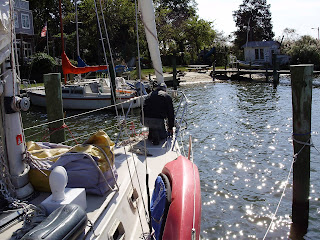 Final step: unplugging from shore power, the last grounding link to land and our home marina. 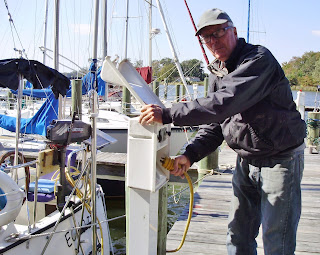 Waited for the wind to die down for a brief calm moment and leveraged her out, with me on the dock holding her off the neighboring boat with a stern line, and Henry pulling her around to the right with a bow line around the front piling. Whew! Safely out of the slip before the wind picks up again. 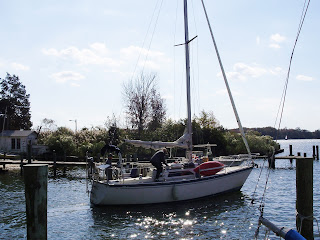 Leaving the marina for good. It's up to the boys now, to get her to Hampton safe and sound. Then on to the Intracoastal Waterway, where I'll catch up in a few days. Final destination: The Low Country of South Carolina? St. Augustine, Florida? The Berry Islands of the Bahamas? Depends on the weather, condition of the boat, and our own patience and stamina. 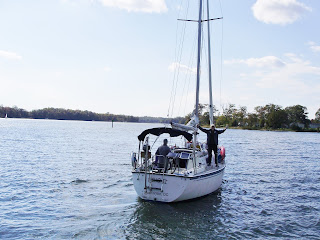 Goodbye! A tear or two escapes when Echo II--the boat Pope and I slaved over for the last few months (well, at least Pope did)--disappears around the bend. 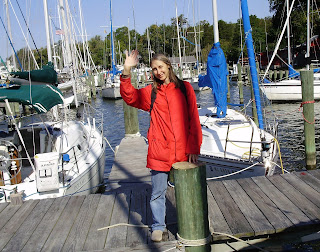 Posted by my alias Amber Jones Adventures at 7:19 PM No comments:

Is it (a) the sound of autumn leaves underfoot, (b) the sensation of biting into corn flakes at breakfast, (c) a strenuous exercise for developing abs of steel, or (d) none of the above? 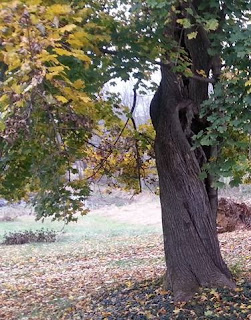 The answer is (d) none of the above. At least for today. 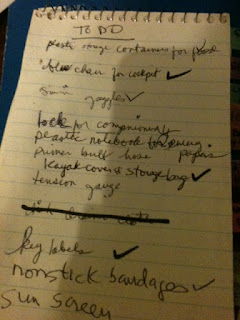 It’s the tense, action-packed 24 hours before departing on a 6-month journey, when: you’ve only cut down your TO DO list from 4 pages to 1-1/2; the boat is still leaking; a furnace valve starts leaking inside the wall; the oven door falls off; you realize you forgot to arrange care for your house plants; and you have to re-thread your sewing machine with stiff, hard-to-handle, UV-resistant thread and sew loops on the end of your jackline (a sailor's tether in a storm). 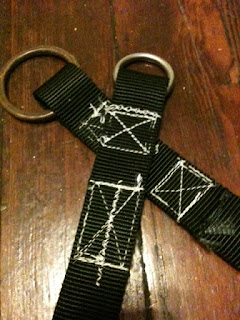 Me: “Are you looking forward to leaving?”

Him: “YES!! I’m SO looking forward to getting out of here. This place is falling apart.” 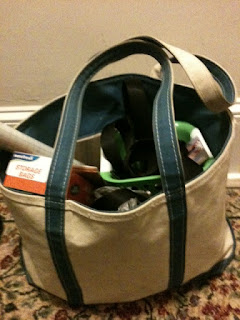 Posted by my alias Amber Jones Adventures at 6:51 PM No comments:

My goodness, is it really mid-October already? Loyal readers, I know that some of you have been wondering whether we rushed headlong into the Intra-coastal Waterway (ICW) just in time for 100-mph winds and 20-foot coastal surges.

No. The week before Matthew upset plans up and down the east coast--from anglers to hikers to festival-goers--we discovered some dramatics leaks aboard our boat, Echo II.  Pope considerately shouldered the burden of finding and sealing them; after all, it is his "project" boat. (For the uninitiated, buying a "project" boat is like buying an "as-is" house.") 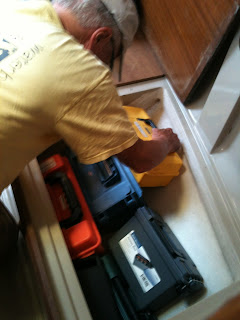 On a "project" boat, most of the holds are filled with tool boxes rather than normal vacation gear such as snorkel masks, beach towels, and margarita mix

Alas, the sources proved mysteriously elusive. In other words, we couldn't find where the damn water was coming in. During a heavy rain last week, a couple of gallons flowed into a dishpan beneath the galley stove, located roughly in the middle of the cabin, from who-knows-where. A few more liters flowed down from somewhere deep in the ceiling onto the nav table, soaking our marine charts and operating manuals. So,z after consulting with several boatyards who laughed and said "come back in February," Pope set about removing, repacking, and replacing every screw, bolt, nail, and rivet on the deck--by himself. 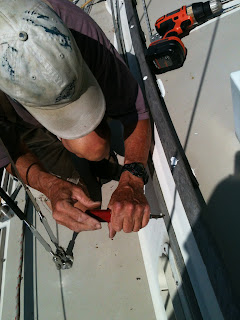 Un-bolting, re-packing, and re-bolting every hatch, window, trim, and track

"It's hopeless!" I cried. "There are hundreds!"

"No, only dozens," was his calm reply.

You may recall, a few months ago, my blog post about how a sailboat cruise to the islands--and owning a sailboat at all--is more work than play. I'm experiencing a sense of deja vu here.

While Pope grunts mightily to conquer rusty threads and rotted caulking, I am addressing other preparations. I wish I could claim that I am preparing margarita mix to store in the galley, or perusing the library book sales for intriguing novels. No. Instead, I am: holding the socket wrench on the nuts while he struggled with bolts on the other side; attacking black mold with Tilex and Borax; making mosquito nets; and sewing an over-the-boom awning for shade against the intense sun of the islands. 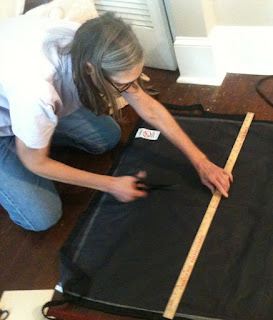 Making a very big mosquito screen--our companionway is too big for any of the ready-made screens available for purchase; that makes it easy for both people and flying critters to get in and out!

Unlike Pope, however, I insist on mixing some play in with my work. Such as gym workouts, Toastmasters meetings, and playing and singing music around town. After all, the boat trip is not my singular goal like it is Pope's, and I sorely need to prepare my body and mind for extreme withdrawal from routine DC-based activity. 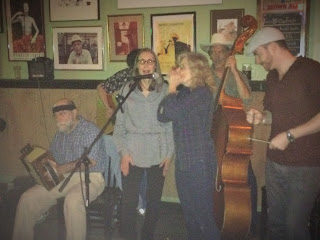 Singing Cajun at the Dew Drop Inn in Brookland, with the Capitol Hillbillies

After 7 days of intense labor on board Echo II, I became concerned about Pope's sanity and dragged him to the Richmond Folk Festival, where the festival grounds were inundated by several inches of rain and mud of the hip-boot variety. Slightly damper than our boat. Despite the downpour, I enjoyed some zydeco dancing under a tent while Pope fretted about whether the boat would stay afloat without him. 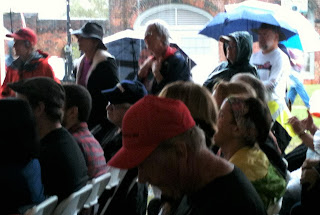 People showed up for the music in vinyl ponchos and rubber boots, on a soggy day

Despite the nasty weather, the music was fine in Richmond. Our local harmonica champion Phil Wiggins (from Takoma Park, formerly of the duo Cephas and Wiggins) played some mean blues and gospel. 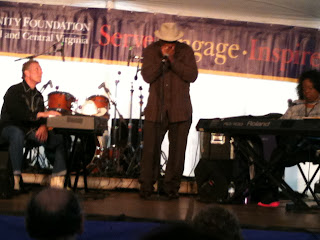 But back to the main story. After Richmond, Pope solicited help from another old salt, a veteran Maine sailor he has crewed with extensively, who knows a thing or two about deck leaks. They are at the marina now, well into Day 4 for the duo, staying overnights on the empty boat. Pope reported that they were surprised to find "beaucoup" leaks. I asked if they were able to fix them all. 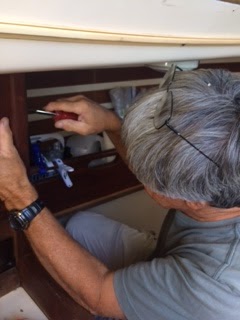 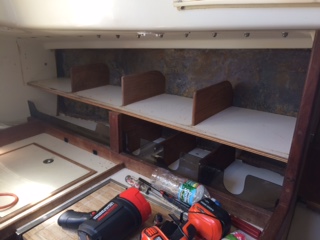 Mike T. knew how to 'strip' the interior cabin features to gain access to the remaining bolts through the top deck

His emailed reply: "Still 4 staunchions to go and a few other small fittings but the hardest part (genoa tracks with 62 damaged bolts) is all done. I am striving for 0 deck leaks. If  not, I am determined to search and destroy each and every remaining one no matter how small before going into North Carolina."

We were also surprised by the first solid news about boating conditions on the ICW. In short, damaged and, in a few places, dismal. Many sections of the canals and rivers closed to navigation for a while. Marinas and docks are damaged and in a few places, boats are piled up like blocks. 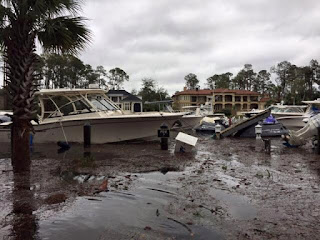 Even the homes of people we are planning to visit along the way are drying out and smelling like fish. 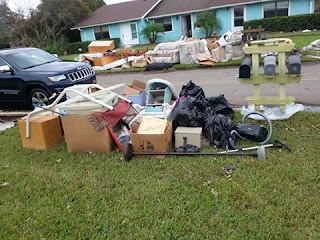 Drying out at a friend's home in St. Augustine (photo from Lynn Healy)

However, today, drawbridges on the ICW began to reopen as power was restored, and several sailor friends left their summer ports on the Chesapeake Bay for points south, hoping for a return to normalcy by the time they reach North Carolina. Navigational aids (like iSailor on the iPad) will remain unreliable because of shifted sandbars, especially in inlets from the ocean, so word-of-mouth news among sailors will be de rigueur. If sections of the ICW remain closed or impassable, our friends will detour into the Atlantic and bypass the inland canals and rivers.

Pope is willing to tackle the ocean, so there's a good chance he'll finish the deck and want to leave in a week or so. Personally, I don't think our boat is ocean-worthy (or maybe I'm not), so I may ask him to line up other crew for the offshore passage. I would be happy to fly down the coast to meet him in Florida in November--or whenever the marinas' docks, boater lounges, and hot showers are restored.

Posted by my alias Amber Jones Adventures at 11:05 AM No comments: