Is It Nap Time Again?

Abort * Abort * Abort. Wait! That Was LAST time. That title's been used before. Need a new one.

I'm getting a tingling in my brain; it's a memory, yes; a sense of deja vu, having been here, done that.

It's a memory that evokes an oft-heard refrain among sailors: oh, broke down again? Well, that just leaves more time for naps.

Pope's brother Jake had visions of flying up Long Island Sound under full sail, wind in his hair, blissfully soaking up salt and sea. He looked forward to it for weeks.

Instead the three of us are soaking up shade under a makeshift bimini, flying around a mooring ball in a strong southeast breeze--a breeze that would have been perfect for the sail up the sound. An excellent opportunity for a mid-day snooze. 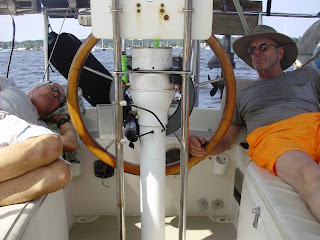 Jake's vision faded with the sunset shortly after departing the East River and entering Port Washington on Long Island, as one of us leaned heavily on a gearshift already worn and rusty, long overdue for an upgrade. Snap.

Yep, I've heard that refrain before. Broke down. Flurry of trying to fix it ourselves. Defeat. 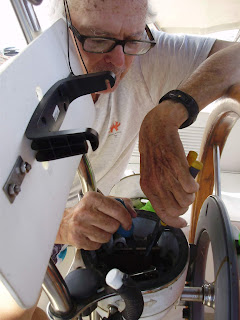 The beer is cold, the red wine flows, the Stop 'n' Shop has bread, berries, and bananas. I've got an excellent book and a backpacker's guitar to practice my music. 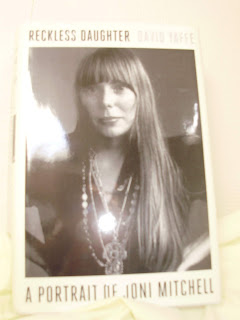 The rocking boat lulls us gently into a stupor every time we settle in, waiting for a Monday morning mechanic. 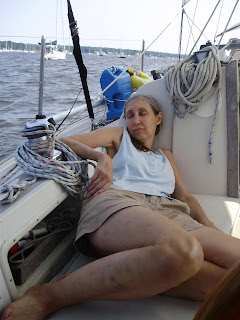 Posted by my alias Amber Jones Adventures at 2:10 PM No comments:

No Toll On These Bridges to Brooklyn and The Bronx

The bridges of Manhattan are a beautiful infrastructure of granite, ironwork, and steel. The architecture is taken for granted by millions of oblivious commuters honking impatiently at the brake lights ahead. Sailing underneath, however, is an introduction to centuries of changing materials and engineering. 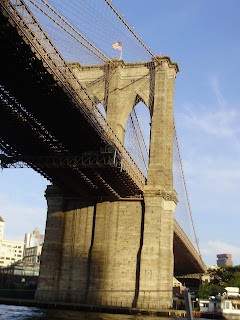 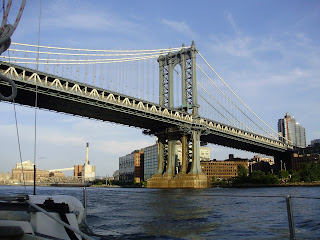 Sailing toward Manhattan is a treat. We did it for the first time last summer. This summer, approaching Manhattan just before dusk because of the timing of the tides, we took a quick slide past the Statue of Liberty. 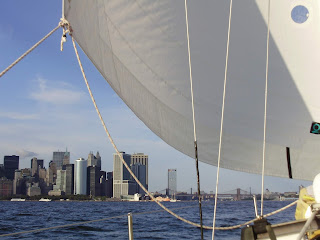 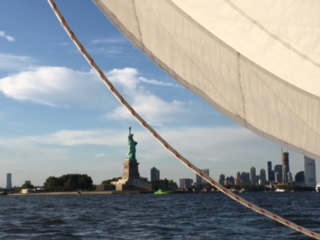 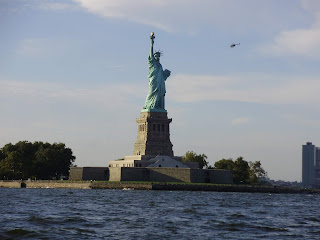 Early that morning, Echo II had arrived at Atlantic Highlands near Sandy Hook, after 24 hours in calm ocean off the Jersey coast, and anchored for a few hours, waiting for the tide to turn in our favor. By afternoon we would be torpedoing past Manhattan and through the notorious Hell Gate in the East River, in currents that can climb to 5-10 knots. Always a thrill. 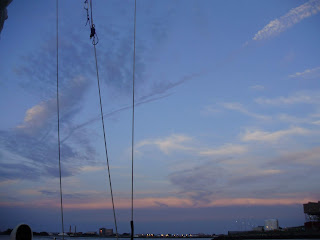 On the way up the coast, we were surprised and pleased to pass fellow zydeco dancer Steve B. in Delaware Bay, returning from New England on his own boat. He recognized our spinnaker from my Facebook pictures and circled around to say hello! (I thought he was going the wrong way, though; the dancing will be in New England next weekend.) After Delaware Bay, we passed through Cape May and sailed north for the New Jersey ocean passage.

By the time we reached Sandy Hook, we no longer looked fresh and clean (see "before" photos in previous blog post), nor was the boat, after three days of hard sailing, biting flies, night watches, and cooking while underway, with nothing but a few naps and a good Scotch to fortify us. Couldn't wait to stand under a shower, dump trash, and buy beer and bandages.

First, though, we had to pass through New York City, a juxtaposition of historic glory and modern glitz. 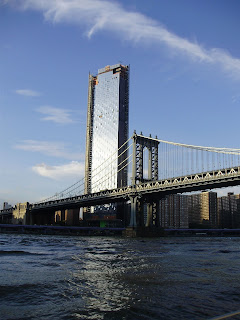 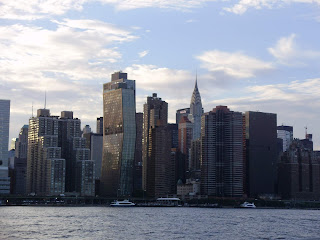 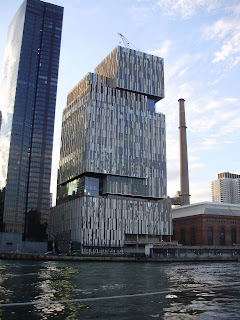 Dodging ferries, water taxis, and jet skis in the lower East River, we passed the United Nations then the upper east side. Finally came the rocky ride through the notorious currents and eddies of Hell Gate.
We left Manhattan glowing under a full moon, headed for the next anchorage and a rest. 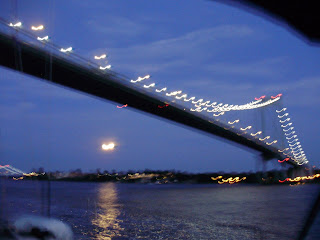 Posted by my alias Amber Jones Adventures at 1:54 PM No comments:

Look Out, New England: Echo II On the Move

Captain's log: Stardate 2018, 22 August, 1330 hours. Hot and humid. Scanning the horizon, no obstacles in sight but a few dark clouds. 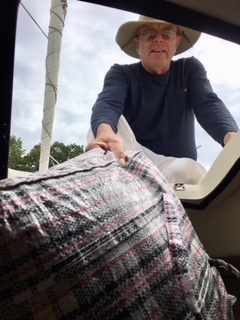 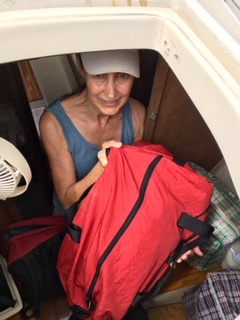 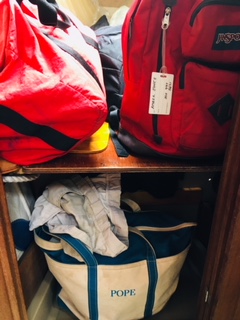 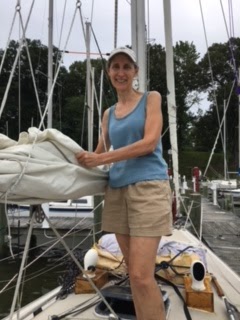 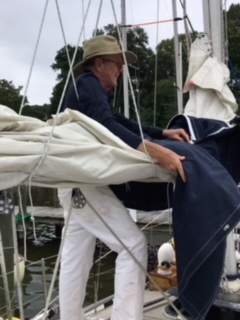 Wind and rain as we left the dock. Oops, Pope forgot his summer rain gear. Up the bay in heavy yellow slickers, his brother Jake at the helm. 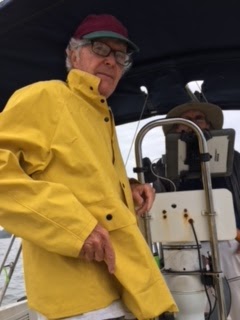 First entry in ship's log by Captain Pope: cast off for another cruise to New England. 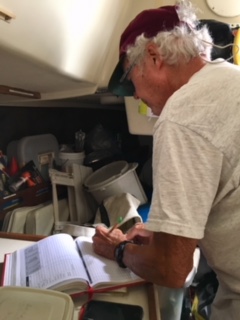 Aah. Feels like second home.
Posted by my alias Amber Jones Adventures at 1:08 PM No comments:

Pope wants me to go on another sailboat cruise. He promises minimal heeling, elimination of all boat leaks, and no mosquitoes.

Ha ha, just kidding! The only thing he promised is that he will take the helm and I can stay in the cabin when blood-suckers strike. He hand-crafted a wood-framed mosquito screen for the companionway. Very classy. Score one for Homo sapiens.

Pope is rarely attractive to mosquitoes (Culicidae). I suspect his consumption of meat and alcohol (B vitamins), junk food (poisonous preservatives), and sugar (bleached and stripped of nutrition) has created a toxic environment around his pores.

I, on the other hand, eat healthy, organic produce with natural spices and the purest milk, butter and local honey. Sweet nectar to the discriminating ectoparasite. Bzzzzt bzzzzt. Yum yum. Scratch scratch. 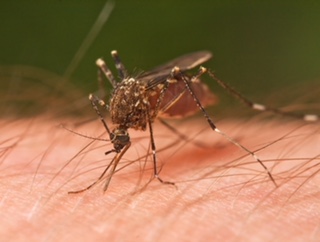 To weed our garden plot yesterday, I donned long pants, long sleeves buttoned at collar and wrists, plus Deep Woods Off (25% DEET) on hands and face. I ran the gauntlet, then raced for the shower to cool the itch. I counted 11 bites--five on my left hand alone, and two on my left thigh--THROUGH THE DEET AND CLOTHES! I even caught Pope scratching. 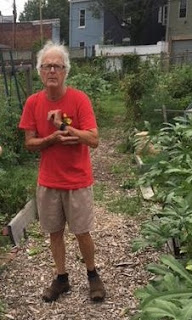 According to the pest-control firm Orkin, DC is the fourth worst city for mosquitoes. And they can be deadly. For now, I'm giving up on lemon eucalyptus and raw garlic and switching to 40% DEET! 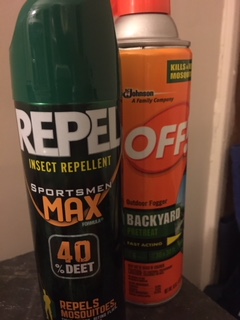 On the boat, the situation exacerbates. Covering up in hot sun risks heatstroke. Showers are the one-minute variety. DEET blows into eyes and ears. Pope THINKS he's in control, but when I'm on board, Culicidae rules.

Another sailboat cruise? Maybe. If we start in October and head for Iceland, one of the few places in the world without these hungry beasts.
Posted by my alias Amber Jones Adventures at 8:10 PM No comments: