In Search of Rotella

Yesterday I travelled all over New Providence Island on a mission from God. At least, I think it must have been from Him; the request came from the Pope that I'm traveling with (who is a pretty exalted being, in my book). He asked me to find some Rotella.

This is our sixth day in historic Nassau, home base for the Bahamas tourist. We are waiting for a weather window to cross the ocean once more, to the Exumas. The castle towers of Atlantis mega-resort are a glance over the shoulder. Music blares day and night, and rum is rampant around the docks. The security guards at our marina keep a large bottle tucked under their table.

And of course, the wind blows and...did I mention that things on the boat get damp? The air is thick with salt spray. The daytime temperatures are 70s-80s and sunny--perfect sunny weather. But humid, just like summer at home. The nighttime dew soaks the deck cushions and drips like rain from the windows. At least that's fresh water.


Nassau Harbor Club Marina, about a mile east of downtown, is not bad for a city marina; the toilets and showers get cleaned before they get too gross, and use of a hotel pool is included in the cost.  (The expensive marinas near the cruise ship docks probably have luxurious tile showers, air-conditioned lounges, and flowers on the counter.) Within a few blocks from our dock are groceries, marine supplies, and wifi at Starbucks.


The major drawbacks in Nassau harbor are crime (boat burglars aren’t deterred even if you’re on board at the time) and the waves created by cruise ships, mail boats, fishing vessels, and pleasure craft.


For those very few of you who might be contemplating life aboard a boat, let me offer some perspective.


In Nassau, Pope has changed the fuel filter and mended the sail. He also set about changing the oil. 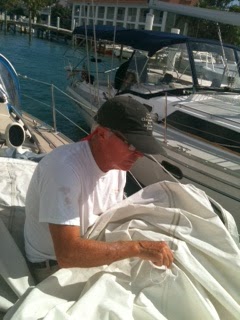 I cooked and cleaned, organized storage areas, and sewed a mosquito net. To accomplish all these tasks, we got on and off the boat roughly 10 times a day, using a rope to pull the boat close enough to the dock to climb up or jump down, depending on the tide. We move carefully to avoid injury--a constant risk on a swaying vessel containing sharp edges on benches, fire extinguishers, ladders, halyards, and cleats. We do not always succeed and have the evidence to prove it, on our legs and arms.

The constant movement is taking a mental as well as physical toll on me. I have just about reached my limit for tolerating a kitchen, bedroom, and bath that roll from side to side, front to back, over and over and over again, 24 hours a day. Torture, a la The Pit and the Pendulum. The incessant rocking has driven me nearly to the precipice of a breakdown!

I seek refuge in shore excursions. When it’s not New Years Eve (see previous post), there’s not much to do in Nassau except eat, drink, and shop. So I have trolled for pasta and sauce, drinking water, a new camera to replace my broken one, fuel filters. We avoid spending big bucks in restaurants and bars and instead lay out hundreds every day for spare parts and dried, packaged food to take along to the remote islands of the Exumas.

Which brings me to my mission from God. Or at least from Pope.

We quickly learned our lesson about bringing supplies from home. Here in Nassau, a big city with lots of marine services, Pope and I spent five days walking the streets and nine phone calls searching for exactly the right kind of oil for our Universal diesel engine--Rotella 30-weight. In vain. Nobody had seen it. Knowledgeable cruisers bring it from the United States. The crew on the boat next door, taking pity on us novices, even offered to sell us some of his. But that didn't solve the problem of taking enough with us to the Exumas.

I can be very tenacious when the stakes are big--in this case, the security of knowing we can keep the engine operating even if--especially if!--we're out in the middle of nowhere. If the oil isn't available in Nassau, it sure isn't going to be found on remote beaches with nothing but iguanas!


In the Exumas, we expect very little in the way of shops or services. We must be self-sufficient. We stocked up with groceries in Miami--or so we thought. Now we wish we had crammed every corner full of canned goods. At each stop since Florida, the cost of food, fuel and water has gone up—now up to $8 for a box of Raisin Bran or Oreos; $6 for Triscuits to serve at happy hour; $5/gallon for diesel, $3/gallon for drinking water, and 50 cents/gallon for non-potable water.
Our quarter berth, instead of being available for guest quarters (which would be quite cramped anyway), holds an alternator, starter, belts and hoses, 3 or 4 fuel filters, large food bins, blankets, and other supplies. In addition to two folding bikes.
I took the city bus around the island, to Solomon's Super Center, sort of like WalMart, and to Marathon Mall, where I stocked up on more supplies and bought my new camera. But Rotella diesel engine oil, 30-weight? None.
Yesterday, I gave up on the Yellow Pages and the bus and let my feet do the walking. I went to all the gas stations and marine stores on East Bay Street,--where the marinas are concentrated--including the stores we had called, which claimed to stock only 40-weight oil. Sure enough, tucked into a corner shelf at Harbourside Marine (one of the "no's)", I spotted the white and yellow label. Success! 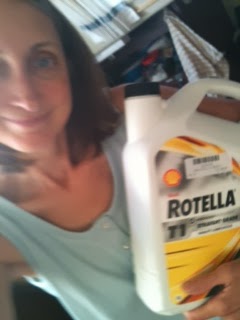 Pope, claiming atheism and not willing to admit to miracles from a heavenly benefactor, claims my background as a CIA investigator had something to do with the fact that I was able to track down an extremely elusive product despite all the obstacles and obfuscation. We plunked down our $120 (2 gallons for us, and a gallon to pay back the crew next door) and smiled all the way home. We're good for two or three months in the Exumas.
Dear readers, I apologize for the transition of this blog from exciting adventures to mundane trivia. I fear our life--which consists mostly of rocking and rolling and waiting around for weather windows--may be getting too boring to continue entertaining you in the style to which you've become accustomed.....

.....Would it help if I told you we had drinks last night with Jim, the former chef at the Inn at Little Washington in rural Virginia, and later chef and co-owner of the nearby Bleu Rock Inn? Jim is now happily ensconced on a dive boat, a massive catamaran docked in Nassau that caters to scuba divers from all over the world who dive, snorkel, and swim the reefs and underwater caves of the Exumas.He cooks gourmet dinners finished with rum drinks and bananas flambe, then leads the flock out to the local nightclubs and karaoke joints of Nassau. 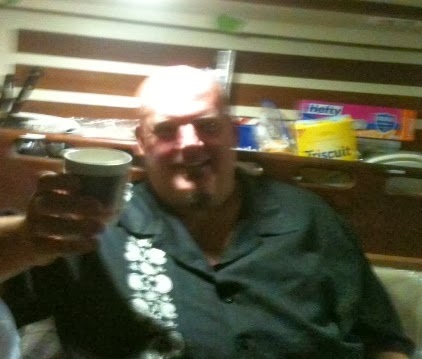 Posted by my alias Amber Jones Adventures at 10:04 AM