Recipes From a Lightly Populated Planet

The planet I live on—cooking-wise—is a lonely one. My tastes are of the quirky sticks-and-twigs variety, my diet is further restricted by food allergies and sensitivities, and I live with someone of often-opposing food values. So how did Pope and I adjust on our Bahamas cruise, where we ate three meals a day together, and none of my favorite foods were available? Below are three of my frequently consumed recipes.


The principles I try to follow at home in preparing my daily bread include:


1. Vegetarian—non-violence to animals. (My domestic partner is a dedicated carnivore.)
2. Whole grains and organic, or at least close-to-the-source, ingredients for maximum nutritional value.
3. Leafy greens (the only scientifically proven nutritional cancer fighter).
4. Convenience. I don’t follow recipes.  Instead of correct ingredients for any given dish, I use whatever ingredients are available in the pantry and refrigerator.


Living on the boat in the Bahamas posed challenges way beyond meshing my eating style with Pope's.


The alcohol stove in the boat's tiny galley worked every time, oblivious to saltwater spray, and had two burners—just large enough for a pot of pasta and a pan of sauce. However, the secondary butane stove, which could be used outside, and the propane grill on the back rail  (photo) eventually rusted out, due to saltwater corrosion. Until then, they were a godsend for keeping Pope’s meat separate from my food and the greasy meat splatters out of the boat's cabin. 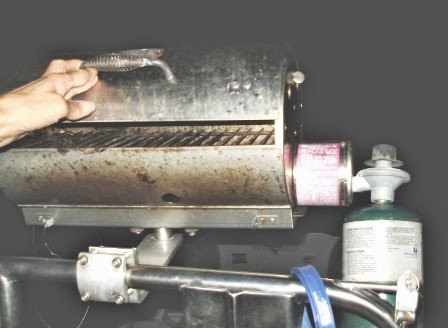 The local diet in the Bahama out-islands (beyond heavily touristed Nassau and Freeport) seemed to revolve around fried conch and fries. Whole grains and leafy greens were non-existent. Virtually nothing is home-grown; although a few households had chickens in the yard, their eggs were not for sale. 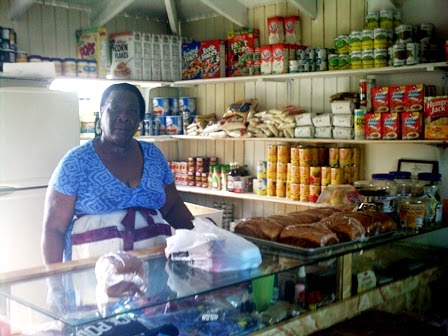 An even more minimal selection of fresh produce arrived every week or two from Florida by mail boat, and was snapped up within an hour of being unloaded by the “highest bidders” (boat owners/frequent visitors who had established a relationship with the store owners). These would be kept in the market's refrigerator,at left in the photo above. Despite the fast turnaround for lettuce, tomatoes, and eggplant, however, we were almost always able to find onions and potatoes, limes and lemons, and often carrots. 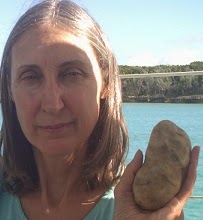 Ice was available on many of the islands, so--when we found them for sale--we were able to keep butter, eggs and milk fresh for a couple of days in our cooler.

Waves and wakes rocking the boat can send hot liquids flying, so meals while underway tended to be crackers, cheese or peanut butter, and fruit.


The following frequently used recipes reflected logistical realities (i.e., what was widely available and convenient to cook). Despite the shortage of nutritionally high-value ingredients, my recipes must have contained sufficient vitamins, because I felt better and was less fatigued during the cruise than at home. Some of that may have been due to retiring and leaving home. But I like to think the fresh limes and local rum had something to do with it!

GRILL-UP  (a weekly standard until the grill died)


Wrap all ingredients tightly in heavy-duty foil, each serving wrapped separately to allow for individual tastes. Grill 20-30 minutes depending on temperature. Remove from grill when smell of cooked vegetables permeates the boat. This works nicely on any backyard grill! After the chopping, there's nothing to do.


Cooked white rice (brown rice would have used too much cooking fuel)
Canned black beans (ditto; dried beans would have used too much fuel)
Seasonings (whatever spices are on board; I used cumin, turmeric, chili powder, and lime; Pope used tomato sauce, red chili flakes, and hot sauce)
Lots of onion
Red or green pepper if available; if not, perhaps canned corn or peas


Saute onion and pepper in olive oil until transparent; add rice and seasonings, then beans. Cook together, stirring constantly, just until heated.


DARK & STORMY (my daily cocktail-hour staple; recipe is from a previous sailing trip in Bermuda; all ingredients were readily available in the Bahamas)


Pour each ingredient over ice, and watch the way the pretty colors layer themselves. Yum. Hint: not very good if ice is not available. I tried several of the rum punches in the local Bahamian bars, and, in my opinion, none of their recipes came close to my favorite dark 'n' stormy. 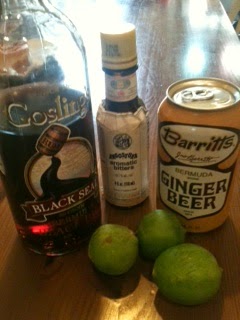 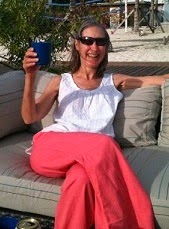 Posted by my alias Amber Jones Adventures at 9:47 AM