WWOOFing It Up: A Too-Short Stint on a Farm in Maine

World Wide Opportunities on Organic Farms is a network of national organizations that facilitate placement of volunteers on organic farms. In return for volunteer help, WWOOF hosts offer food, accommodation and opportunities to learn about organic lifestyles.
Me? Volunteer to work on a farm? Yeah, I know what you're thinking: City girl voluntarily gives up air conditioning and dishwasher. Ha. Vegetarian espouses non-violence but squishes mosquitoes and Japanese beetles. Hypocrite. How could I possibly distinguish fleabane and cheatgrass from fledgling seedlings, or choose the proper tool? 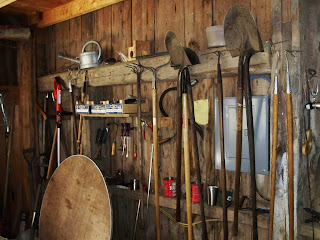 Well, guess what: I joined Pope on this adventure anyway. One week doing general farm and garden duties, in return for room and board. No money changes hands.

We arrived at Sandy Oliver's rambling and historic farmstead, on an island off the coast of Maine, last week via a complicated network of transportation options. Having sweated through plane, taxi, bus and ferry in blazing sun and humidity (who knew that global warming has reached the coast of Maine?), I was tired, discouraged and wary of being outdoors where I would be vulnerable to sunburn, grass and hay (I'm allergic) and the legendary giant Maine mosquitoes.

I was surprised. From weeding to planting to feasting on the abundant harvest, the week has been delightful, and I am amazed--even appalled!--at how fast it has flown by. And how much I learned. 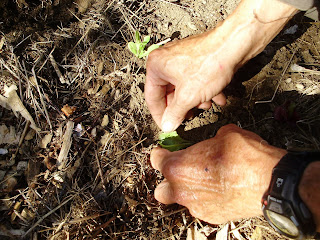 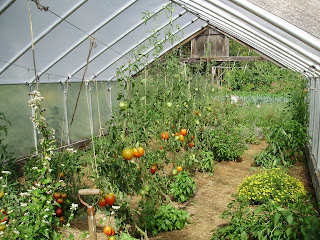 Staking out tomatoes in a "hoop house" shelter 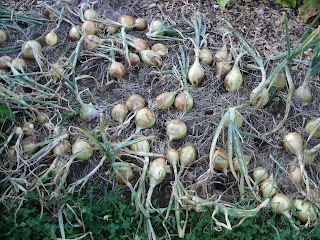 How do you like your onions: white, yellow, red, or green? All varieties are ready!

Our first WWOOFing experience was in March 2015 on an olive-and-fruit farm in southern Spain, where we fed chickens, shoveled manure, picked and shelled hundreds of broad beans. Pope stayed two weeks. Despite the delicious diet of fresh grapefruits, avocados, and lemons and our lenient hosts, I lasted 6 days, then fled to a riad in Morocco where I feasted on couscous and sumptuous tagine.

In Maine, I have already made it to Day 6--with only three serious insect bites and few complaints. The growing season is short, and the harvest is condensed into a few weeks in August-September. So each day here has been a whirlwind of relatively easy activity: picking (greens, beans, tomatoes, and peaches); planting (fall crops such as lettuce); watering; canning (green beans, pickles, peaches, and peach chutney); and, of course, implementing the obligatory daily weed-reduction program. 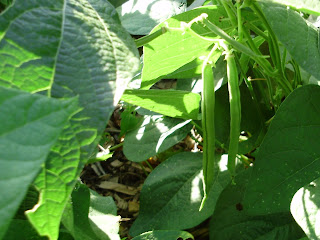 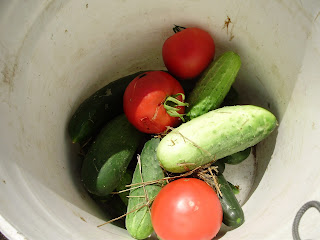 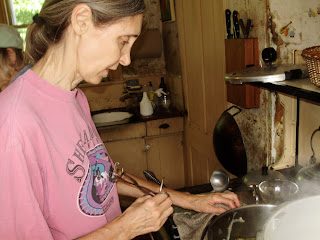 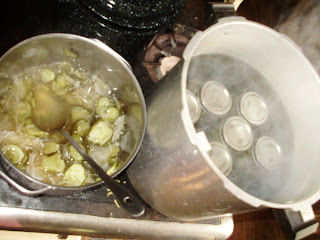 Throwback to my childhood: canning cucumbers in brine over a hot stove

How many ripe peaches must one grown woman eat to reach satiation? I don't know, because I am up to four or five a day and still drooling for more. I have eaten them on granola, as a snack, in salads, as dessert, while canning them, and whenever the urge overtakes me. Peaches are an important cash crop on this farm, and the key to keeping this WWOOFer smiling. 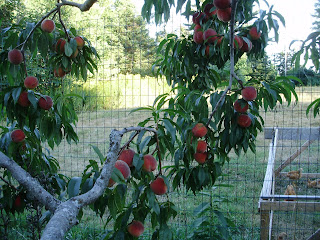 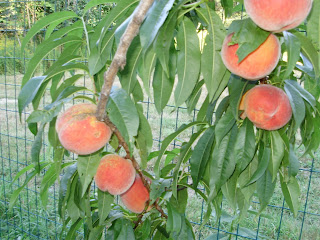 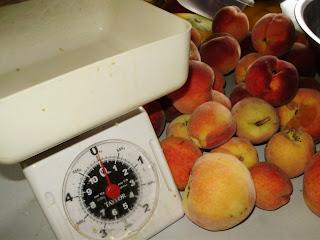 The aroma of peach chutney simmering on the stove, in my opinion, is second only to that of eggplant parmesan baking in the oven. 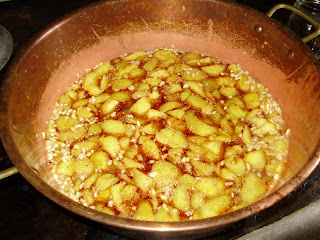 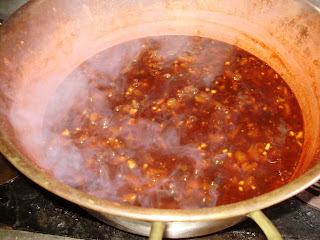 The rest of the food was eminently suitable for this vegetarian--and perhaps enough to induce an omnivore to switch? We ate green beans by the dozen; leafy greens and lettuce by the half-bushel; cucumbers and tomatoes diced, sliced, dressed, and cooked; and squash, potatoes, onions, garlic, and eggs laid daily by a brood of hens. After 5 days, however, Pope begged for meat, and Sandy found some chili in the freezer for him. 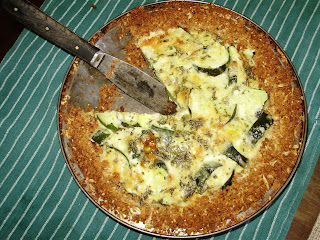 My favorite: zucchini and onion pie with cracker crust; green beans and tomatoes on the side

In addition to gardening, three times a day we fed and watered the hungry young chicks that are, sadly, destined for the meat market. For this phase of their short life, they were tenderly and affectionately cared for. 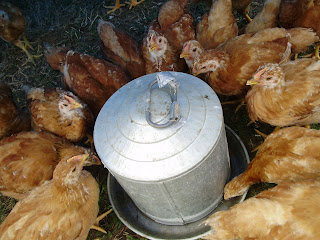 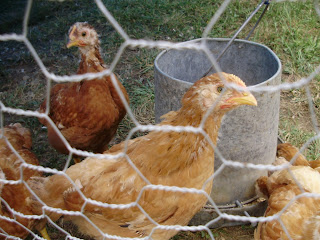 As we all know, all work and no play would make Pope and Amber crabby campers. With limited transportation, on a lightly populated island that largely shuts down at the end of August, options for time off were greatly simplified: meditation and blogging for Amber, reading and playing with the chickens for Pope. 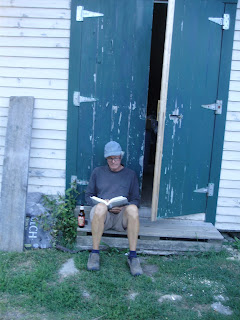 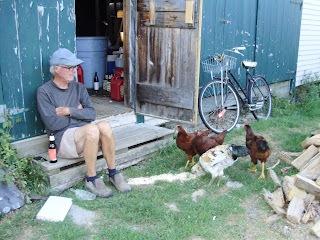 Walking is an option, though there's no place to go except up and down the road or through the woods. 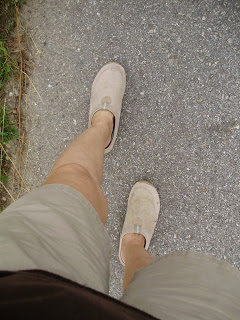 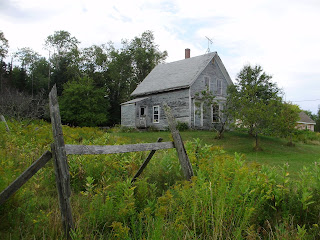 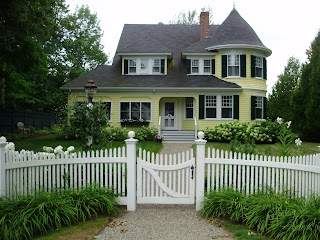 Rambling down the road: the houses on Islesboro range from ramshackle to magnificent

In the woods, you might stumble across a patch of ripe blackberries. Reminder to self: bring container. 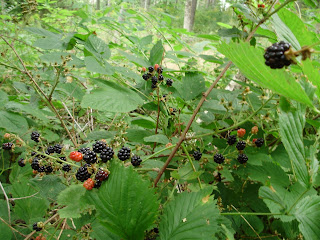 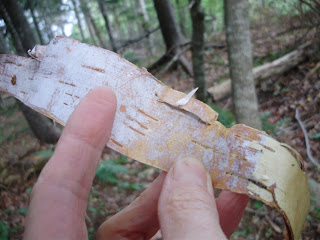 Another throwback to childhood: finding white birch trees in the northern woods

It's a simpler life, far from the congestion, commercialism, and cosmopolitanism of Washington, DC. Here, occasional deliveries from the mainland--boards for repairing the porch, and a new ladder--induce a dance of joy in farmer Sandy. 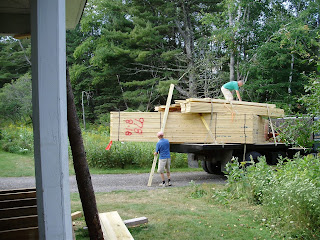 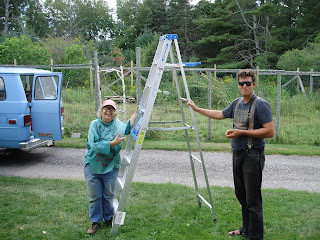 Even this city gal has adapted to the natural air conditioning (open window), washing seemingly endless dishes (by hand), bathing in a claw-foot tub, and dashing out to get last-minute ingredients with garden clippers instead of a credit card. It helps that the Maine mosquitoes, though their bites are as wicked as reputed, are almost as scarce in late August as the island's summer population. And it helps that every meal is fresh, farm-to-table, delicious, and included in the price: zero. Rose's Luxury, move over.

I agree, WWOOFing it up on a farm may seem like an unusual vacation choice for a big-city American girl. This girl found it to be endurable, even pleasurable. Oh, what the heck, I admit it: I actually enjoyed myself!

Who knows, maybe I would even consider doing it again.
Posted by my alias Amber Jones Adventures at 5:37 AM