When I was a kid, my mom used to sing “He’d fly through the air with the greatest of ease,” from the song “The Daring Young Man on the Flying Trapeze.” I always wanted to do that! But alas, I was afraid of heights.

Backpacking on steep mountain slopes was terrifying. My companions had to hold my hand to coax me past snowfields and rockfalls. Climbing a ladder on a rock face in the Grand Canyon, I froze. Sweated. Had to be coaxed down. On the Outer Banks, I tried parasailing—and came down an emotional wreck.

A week or so ago, Pope decided that--of all the adventures and extreme sports New Zealand had to offer (see previous blog post)—paragliding was his choice. A taste of hang gliding and skydiving, but slower. $200 for half an hour. We had watched some spectacular soaring the day before. 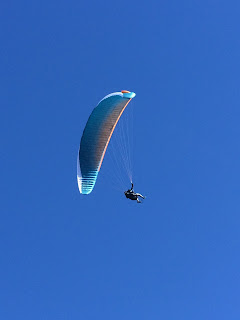 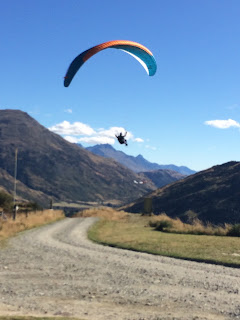 I smiled and nodded. “Go right ahead! Have fun.” But not for me. Oh, no! Waiting at the bottom of the mountain, I contentedly watched as Pope lazily drifted past clouds, waterfalls, and sub-alpine meadows, strapped in with an instructor. His adventure, not mine! 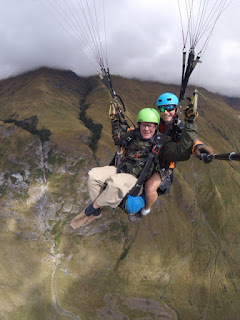 Watching with me--goading me--were two paragliders waiting for a ride up the switchbacks to the launch point, at the top of Treble Cone Ski Area near Queenstown. The paragliders (male, of course) expounded on wind direction, thermals, topography, and what it feels like to come down a mountain under a chute instead of à pied. Fantastic! they claimed. (Yeah, right.) They "gently" encouraged me: "Aw, go on, scaredy-cat! It's easy." Uh, no. I was just fine with being a scaredy-cat.

Although it did look kind of graceful up there, floating at the end of a line, under a colorful kite. Sort of special to glide past a waterfall. Stunning views. Hmm. $200 for a few moments in time...?
I kept busy, recording Pope's landing (video above). By the time he came down, though, I had somehow, reluctantly, allowed myself to be pushed into the van. "Go! Go, you ninny!" (Was that an internal voice???)

Surprise! I survived. No; more than that. I got into my groove! I goofed off for the camera. I consented when the instructor offered to ride a thermal up to the Long White Cloud in the nation's nickname (video below).
Toward the end, I even agreed to a few vertigo-inducing acrobatics: wing dips (video below). Listen to those wind gusts! Wait, who is that shrieking? No somersaults, thank you! Not scared exactly, just feeling a bit dizzy.
Amazing turnaround for someone who couldn't stand close to the edge of a cliff. Being strapped in with an instructor, and sitting upright instead of flying facedown (as in bungee jumping or sky diving), were the keys to my comfort--I think. Or could it be I'm changing with age? Feeling my mortality, perhaps, and wanting to grasp the brass ring while still able?!

Here are my favorite pictures, graciously recorded by my bosom buddy, Hayden. GoPro photos of your adventure--for only $60 more! 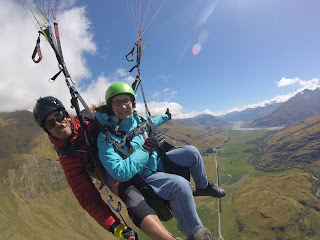 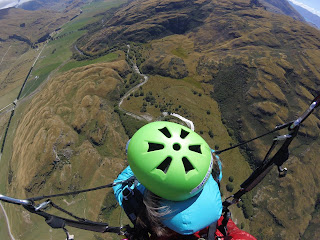 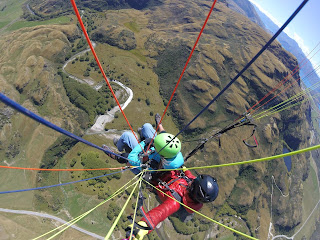 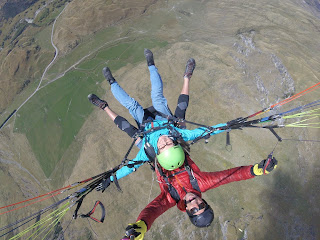 Posted by my alias Amber Jones Adventures at 9:32 PM