Warning! This Island Can Be Hazardous To Your Health!

Wait! That title sounds awfully familiar. I'm experiencing that creepy sense of deja vu.  In fact, I remember writing a previous blog post with a similar name. What gives???

What gives is that authoring a blog called Amber Jones Adventures requires a certain amount of, to put it bluntly, adventuresomeness. Excitement. Risk. I can't expect to retain my reputation--and readers--with only a few days of sandy beaches and blissed-out Downward Dogs.

In New Zealand, I solved that problem with paragliding. In Hawaii last week, I noted plenty of opportunities to risk life and limb. 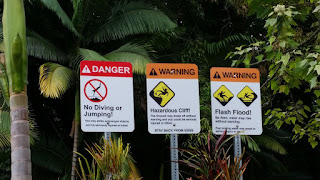 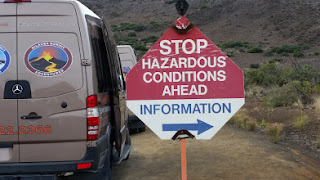 The most challenging activities on the Big Island are probably 1) jumping off the high cliff at South Point into the sea, and 2) hiking at the foot of Kilauea volcano in search of fresh lava that burns your boots and swallows small mammals (and occasionally people). But hey, I did those 18 years ago, on my first trip to the Big Island. I needed a fresh challenge. 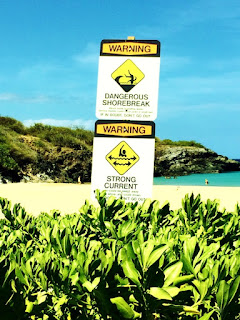 Behind the signs, Hapuna Beach beckons--a luxuriously long expanse of pure white sand on the Big Island. On the beach, I encountered preparations under way for a half Ironman. 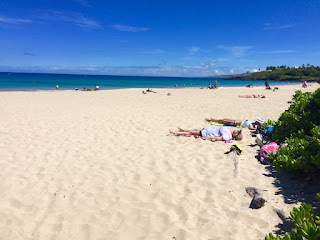 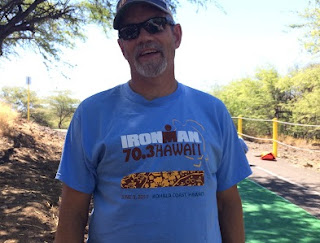 Dozens of athletes were in the water, braving the risky conditions to train. Naturally, I dove in and joined the pack, prepared to wrestle with a deadly undertow. While the 20- and 30-year-olds prepared for their 70-mile bike ride, 13-mile run, and one-mile swim, though, I conked out after only a half mile in the water, and the currents failed to sweep me away. The worst thing that happened--I am sorry to report--was bruising my toe on a small piece of coral.

The next beach offered a more inviting scenario for adventure. The black-sand beach at the bottom of Waipi'o Canyon is a long way from civilization and can be accessed only by a hike down a steep cliff. Swim at your own risk; the surf is strong, there are no lifeguards, and an ambulance can't negotiate the four-wheel-drive trail. 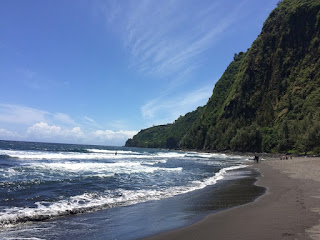 Imagine my consternation when I returned from a walk on this lonely, remote beach and couldn't find my friend Sally! (Finally, an adventure...?) I knew she had gone in the water--alone. I searched for clues, and found the wet rock where she had been sitting, just 10 minutes earlier. 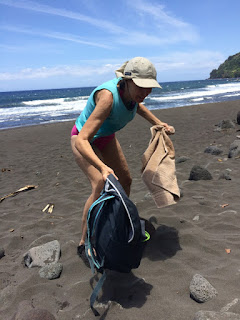 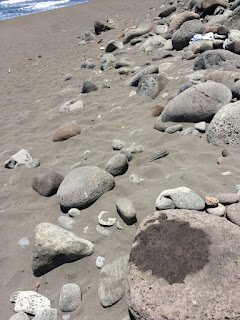 I frantically scanned the water, prepared to swim out and perform barely-remembered, convoluted life-saving maneuvers. Suddenly I heard a voice behind me, emerging from the woods. It was Sally; everything was fine. (Shucks.) 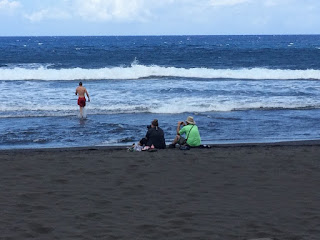 Onward, to the next potential adventure: the botanical gardens, At first glance, these lush, overgrown acres appear benign. Aside from allergies, how can a bunch of exotic tropical flowers hurt you? 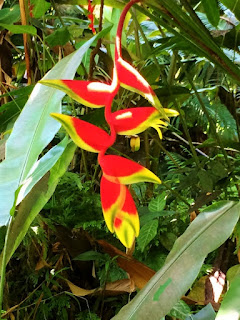 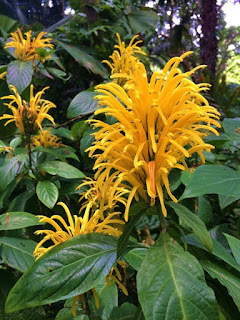 Ah! But this garden has its share of both pretty flowers and lurking danger. Turn the corner--and watch your head, lest you be crushed by a shower of falling mangoes or coconuts! 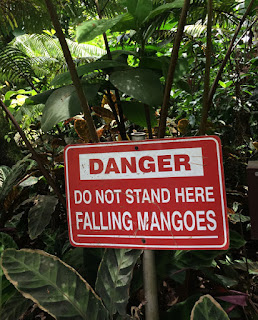 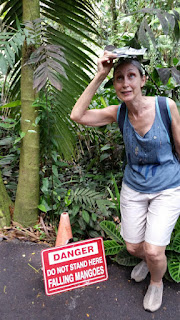 Alas, nothing hit me on the head at the gardens, though I did get a few mosquito bites. (Risk of dengue fever...?)

On the plus side, adventure-wise, the resident volcano, Kilauea, continues to spew fresh burning lava, the most recent eruption getting well under way by 2008 and continuing as recently as April 2017. You can view a recent lava flow here.

The Big Island is built of lava. In some places, the lava is old and gray, sprinkled with soil, and plants have taken hold. In other places, the roads cut through massive fields of recent black lava flows. 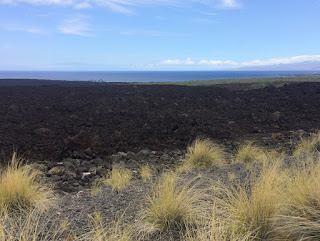 Hazardous, right? You know the island poses some serious health and safety risks when the airport is located next to the volcano. 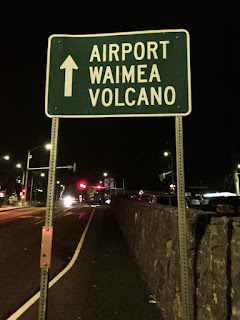 Alas, I was unable to stay on the Big Island long enough to search out the latest red-hot lava on which to test my mettle--and burn my fingers and toes. I had a plane to catch.

With the limited time I had left, I had to settle for a lesser challenge--battling the wind. Remember, wind is my nemesis! On the Big Island, there is plenty of it--easily enough to knock me off the edge of the cliff at the edge of Pololu Canyon.
Once again, however, I avoided the worst. Posing for photographs on the upper rim of the canyon, I felt the wind in my hair, but....got right back in the car, without mishap. 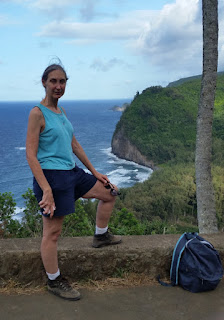 As you can see, the potential for exciting adventure abounds on the Big Island. For once, however, I managed to avoid it, enduring an entire week of boring, safe vacationing with little harm to life, limb or spirit.

In fact, the biggest risk, for me, of vacationing on the Big Island might be the risk of falling in love with it and wanting to move. Now that could cause some serious consternation! 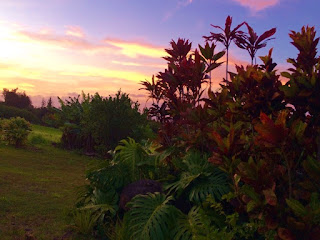 Posted by my alias Amber Jones Adventures at 2:52 PM