Packing Up and Casting Off

I begged for a few more days to finish packing, sewing custom sheets, getting my financial records in order, and spiffing up the kitchen for the house sitter. Not one to sit on his laurels when an adventure is in the offing, Pope headed down Chesapeake Bay without me, accompanied by two alternative crew members. I'll catch up in a day or two. 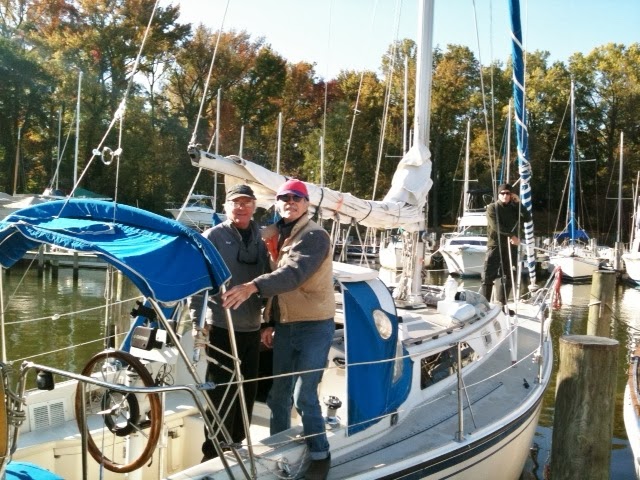 Wise move on my part!  The winds gusted to 30 knots, the reefing system needed re-jiggering, and the jib (front sail) tore on the second day out. Our good ol' boat flew down the bay at 7 knots--phenomenal for such a heavily laden vessel. After all, many of  our worldly goods are on board. I'm not one to survive without a lot of creature comforts; bad enough to live without my hair dryer, refrigeration, and a bathtub! Air conditioning? Open the hatch, let the breezes flow!! Heat (as someone asked me last week)? Bundle up in your fleece and knit cap.﻿
In the end, we had to sacrifice several essentials to the limited-space gods. My guitar, much to my chagrin. Just isn't room on Echo II, unlike that luxury yacht we chartered in British Columbia. Our big spaghetti pot, Pope's favorite cooking vessel. Doesn't fit on the mini-burners. Our entire galley (boat kitchen)--forks, olive oil, and all--is confined to the 4 square feet shown here. Sink left, cooler center, stove right. Where to store beans and rice? Under the bunk. Where to chop carrots and measure oatmeal? On your lap. 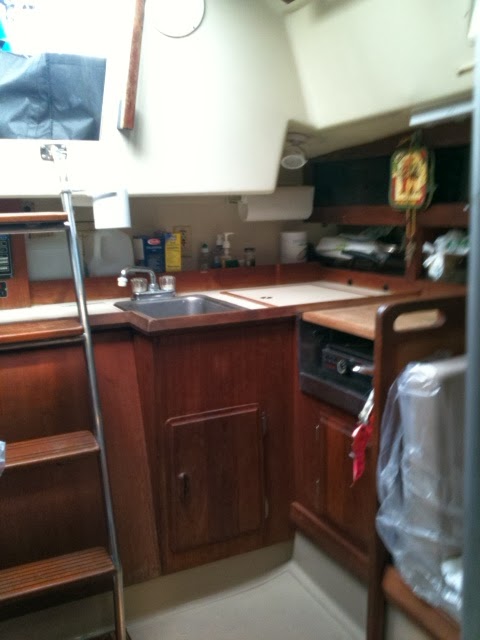 (By the way, take note of the ladder stretching down from the companionway--the opening from the outside cockpit to the interior cabin; more on that in a later blog.)

I'll be meeting the boys in southern Virginia tonight, turning over the car for the backup crew to return to the National Capital while Pope and I continue toward Great Dismal Swamp--and the adventure of a lifetime.
Posted by my alias Amber Jones Adventures at 9:03 AM