(Translation of title: Singing a Song of Joy, in July)

What an exciting week! 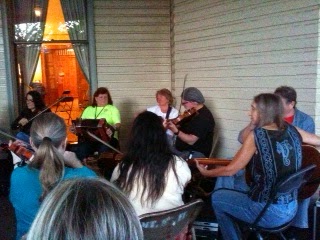 My fellow students and I have been busy practicing. This Wednesday, I made my public debut singing a cajun French song at the monthly cajun jam at New Deal Cafe, Greenbelt, Maryland. The video is on YouTube at
http://www.youtube.com/watch?v=x_thLuVMW3U. Check it out!
(Video taken by Linda Bennett) 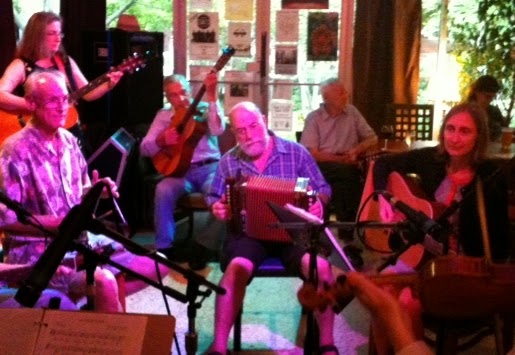 Five of us DC-based jammers were in the week-long cajun vocals class at Augusta (which was very hard!!): Sheridan, Jim, Tom, Ann and me. I was the only rank novice. (You can hear my fellow jammers cheering at the end of my song in the video!)

In the class, we learned, practiced, and drilled for five grueling days with an accomplished professional, David Greely, formerly of the band Steve Riley and the Mamou Playboys. We studied timing, rhythm, melody, cajun pronunciation and phrasing, and history of the music. It was difficult to learn, but so much fun to play and sing! I am grateful to David for his hard work and patience. And now, I am putting the lessons into practice. 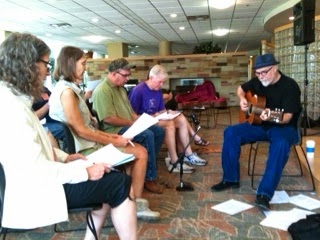 Joel Bailes, another New Deal jammer who studied accordion for a week at Augusta while the rest of us sang, learned the accordion part for Chopique Two-Step, just for my singing debut Wednesday night. Thanks, Joel!

If you are ever in the Washington, DC area, come on out and enjoy the music -- fourth Wednesday of every month at New Deal Cafe.

Posted by my alias Amber Jones Adventures at 11:16 PM