Time--how relative! We are visiting sites with tens of thousands of years of history--castles and caves and vestiges of man's habitats that have stood the test of milennia. With our busy schedules, we are struggling to see even a fraction of what was left behind.

Chinese horses, troglodytes, walnut farmers, bison, Josephine Baker, and French national kayak champions all have one thing in common: they inhabited the Dordogne River valley sometime in the last 20,000 years or so. The dwellings, drawings, monuments, and other paraphernalia left behind can keep a tourist busy for months, seeking them out. Where can one find that much time??!! 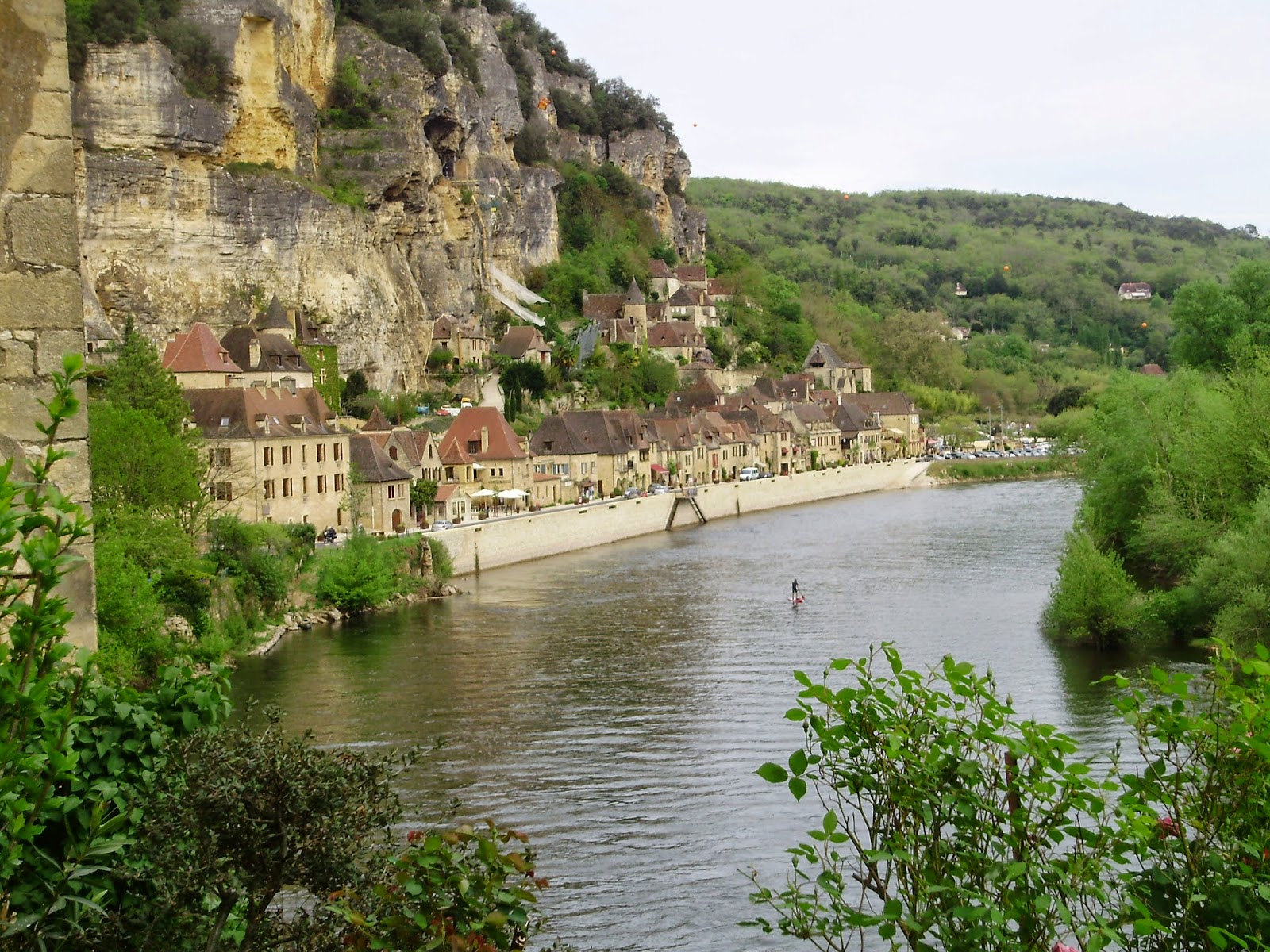 There is so much to see, do, and learn in the valley, we can barely keep up the pace expected of knowledgeable, interested, mobile, intellectually curious travelers. Each day we wake up, stretch, and sit around mired in indecision--what to do today? So many things to choose from. One day--it happened to be a Sunday when many attractions were closed anyway--we were so paralyzed with FOMS (Fear of Missing Something) we didn't actually  emerge from the mouth of our chilly stone cave until 6 pm (local time), when everything was closed, but still in time for dinner and drinks at a local brasserie. (Which were worth the investment of a couple of hours, by the way.) 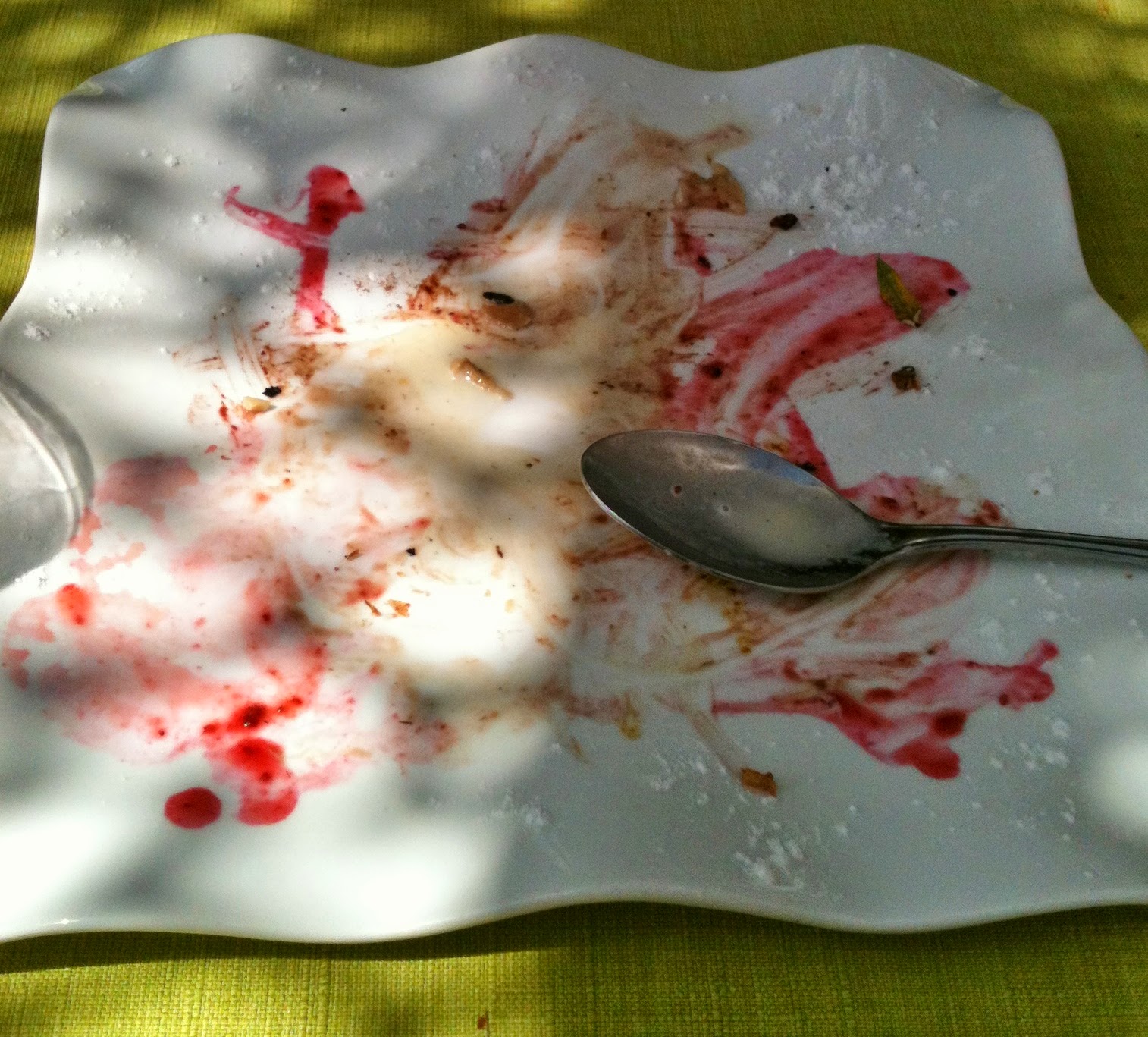 In previous days--speaking of caves--we explored the troglodytes' cave dwellings, a la Mesa Verde, both under the earth and in natural hollows in limestone cliffs. The caves have been inhabited on and off for 17,000 years or so, the lastest residents being Protestants who were routed from their cliffside slumber and slaughtered wholesale by Catholics sometime in the Middle Ages. (This happened in regular villages here also, one of the reasons for so many castles and fortresses.) 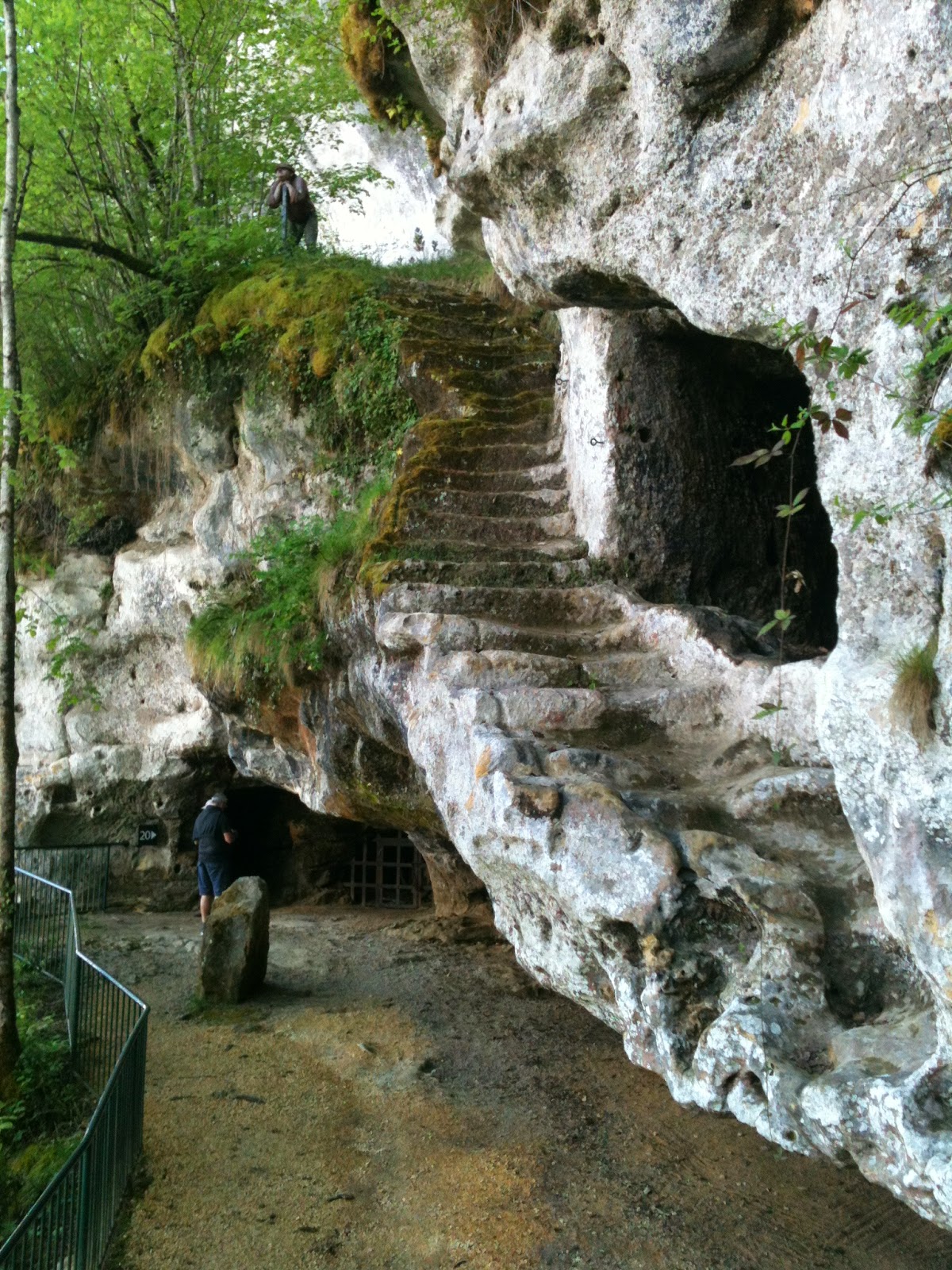 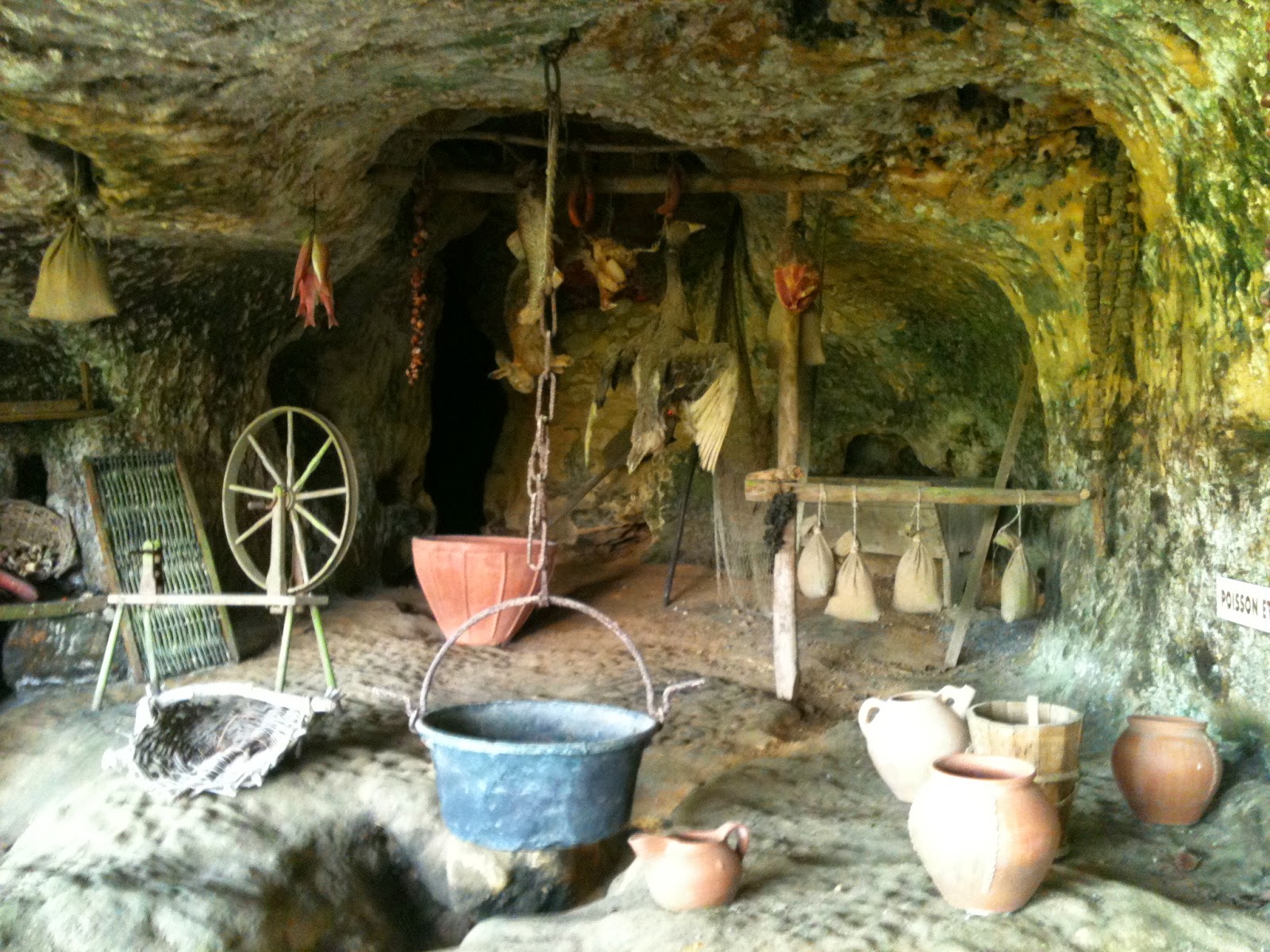 When Cro-Magnon was master of the local underworld, he hired some exceptionally talented painters to decorate the inner sanctums in bright reds, browns, grays, and blacks. Whether he did it for spiritual, religious, war game, hunting, or just plain creative artistic reasons, no one really knows. What is known is that many many millennia ago, he built scaffolds to paint on the ceiling and invented techniques that today's art experts spent decades trying to recreate. The clever use of cave topography, natural dyes, and blowing and brushing techniques add to the depictions of horses, bulls, bears, bison, mammoths, man, and other creatures an air of natural movement and grace. 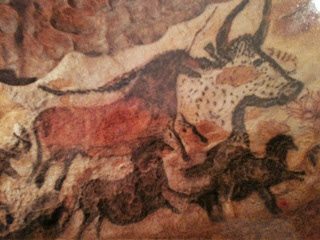 Well into his agricultural and domestication-of-animal years, man continued to come up with clever and visually appealing ways of protecting self, family, and meatstock; for example, domed roofs of stacked rocks, with no timbers, mortar, or mud holding them up. Animals on the ground floor; people slept in the loft. 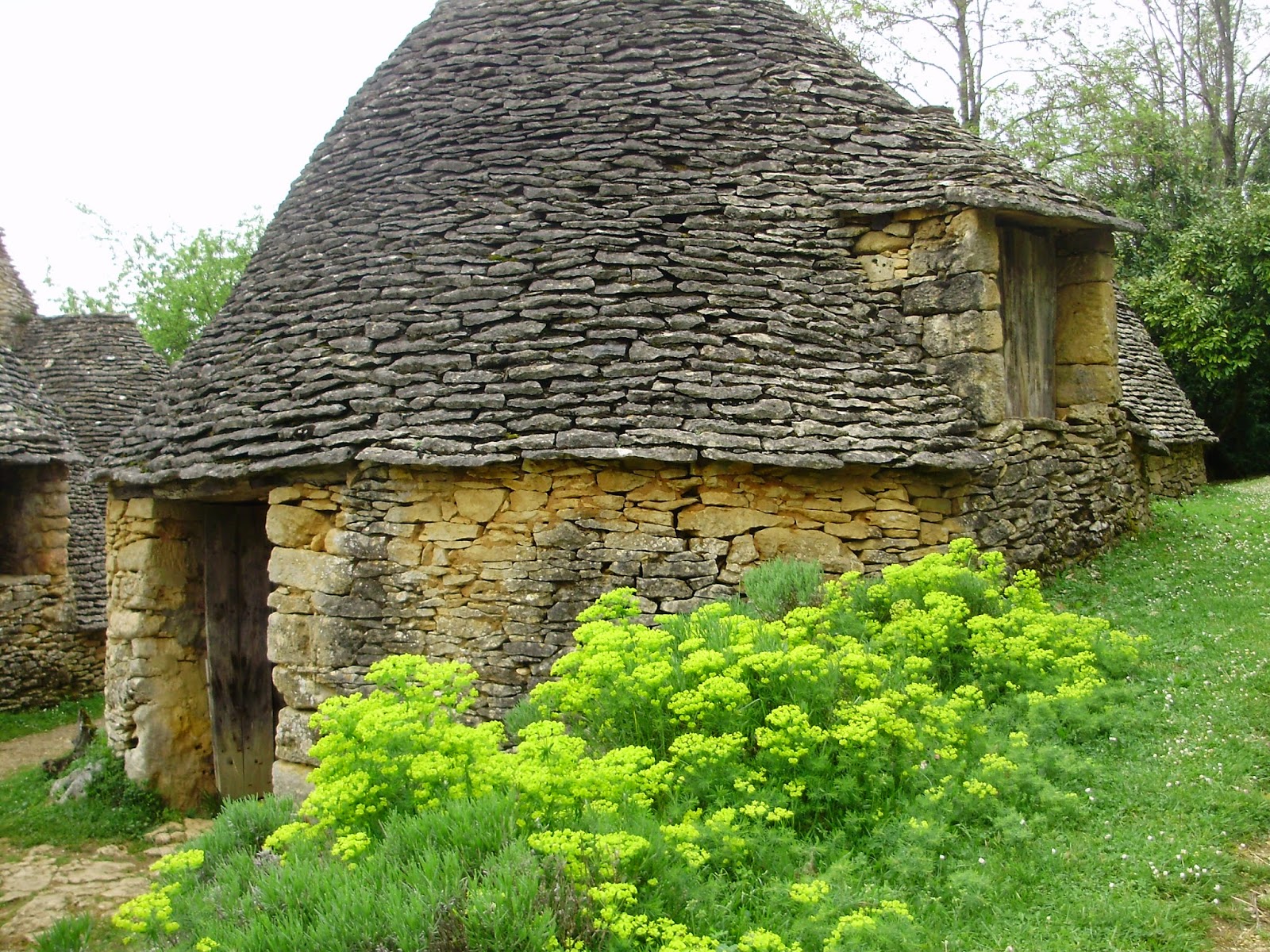 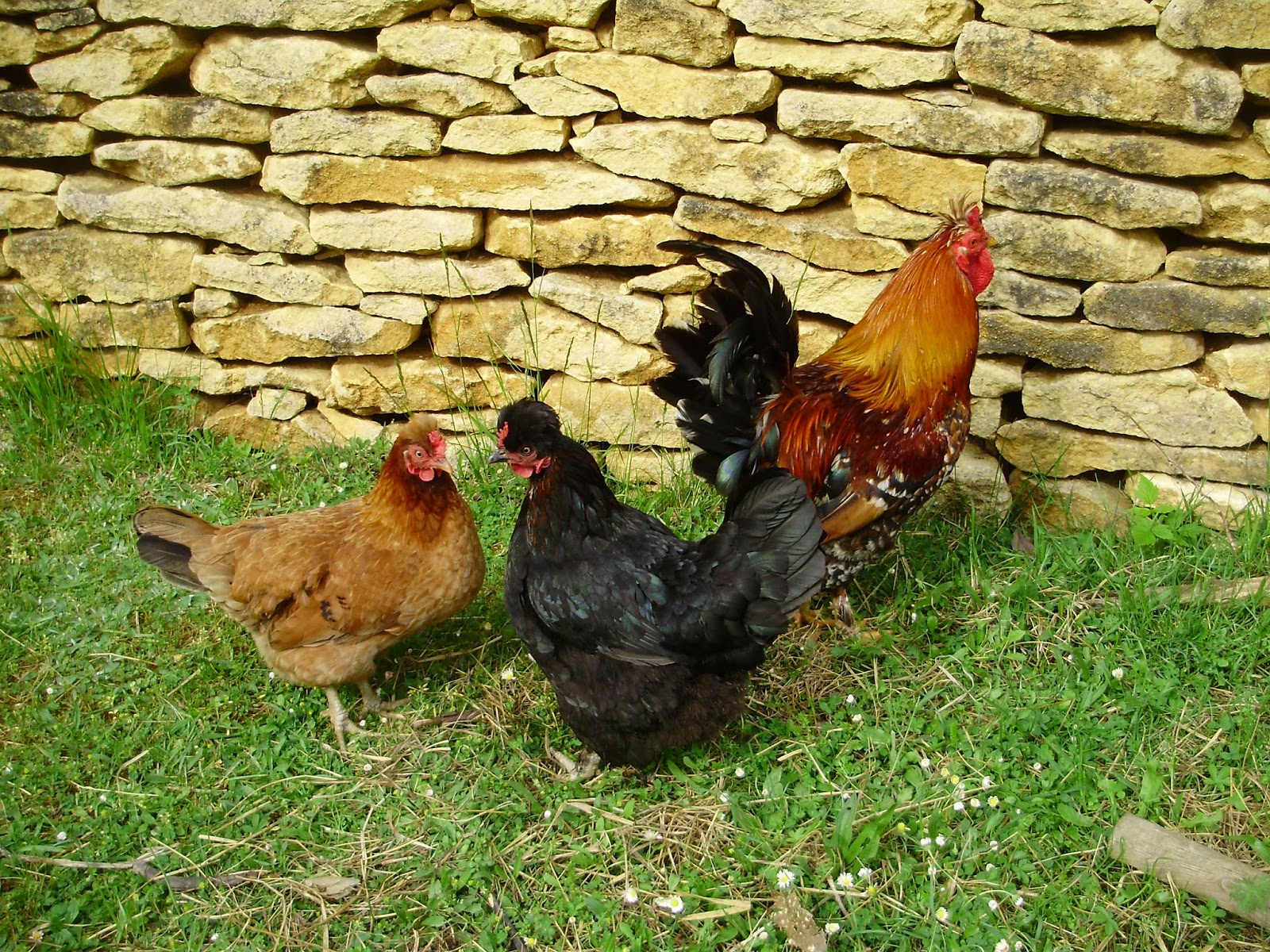 Of course, religion has long been a significant factor in family, community, and political life, with the Catholics and Protestants especially battling it out for centuries, fighting for the hearts of the local lords and farmers as well as for valuable real estate investments--such as this cloister begun in the 12th century and renovated sometime around the 15th. 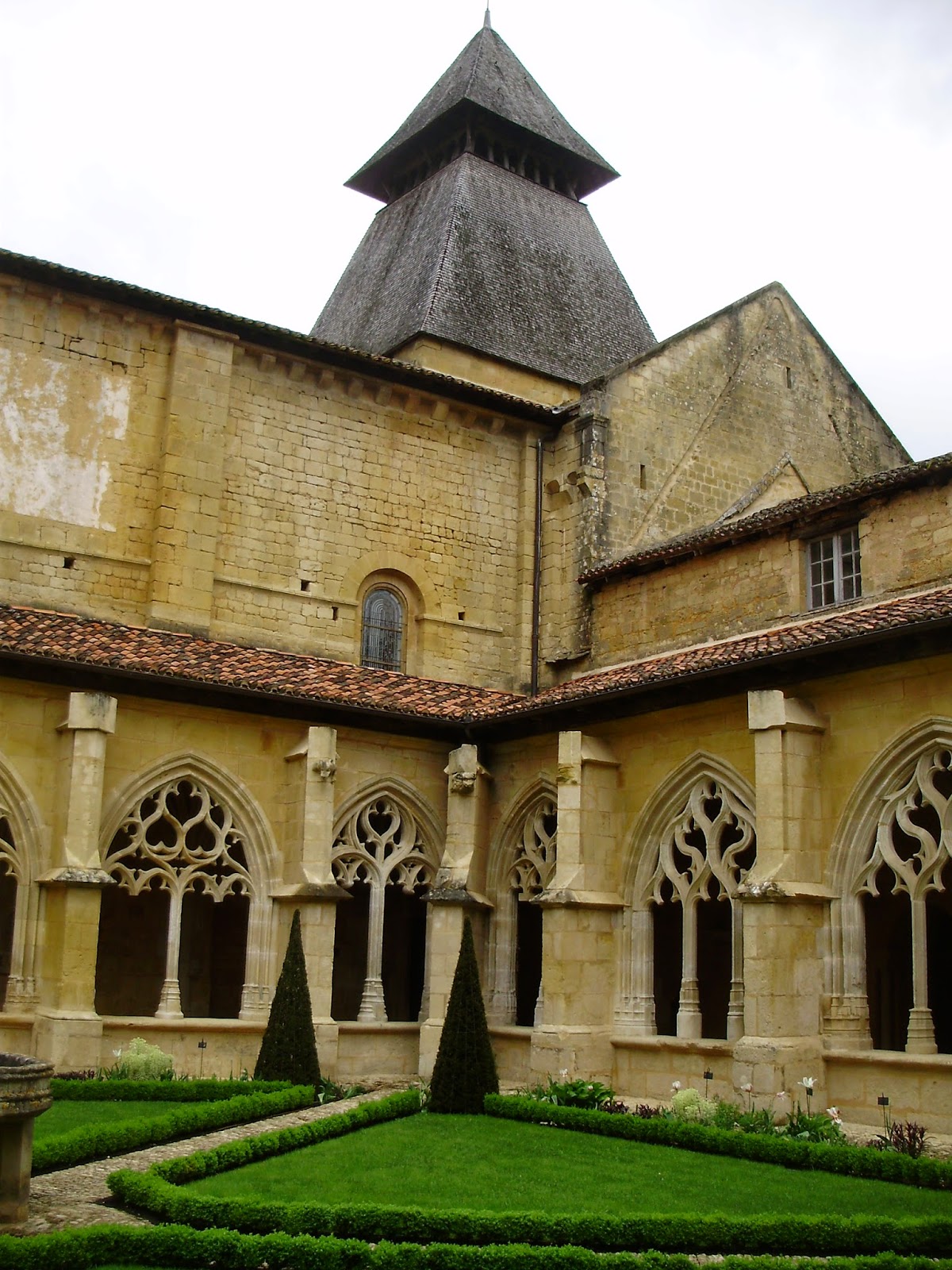 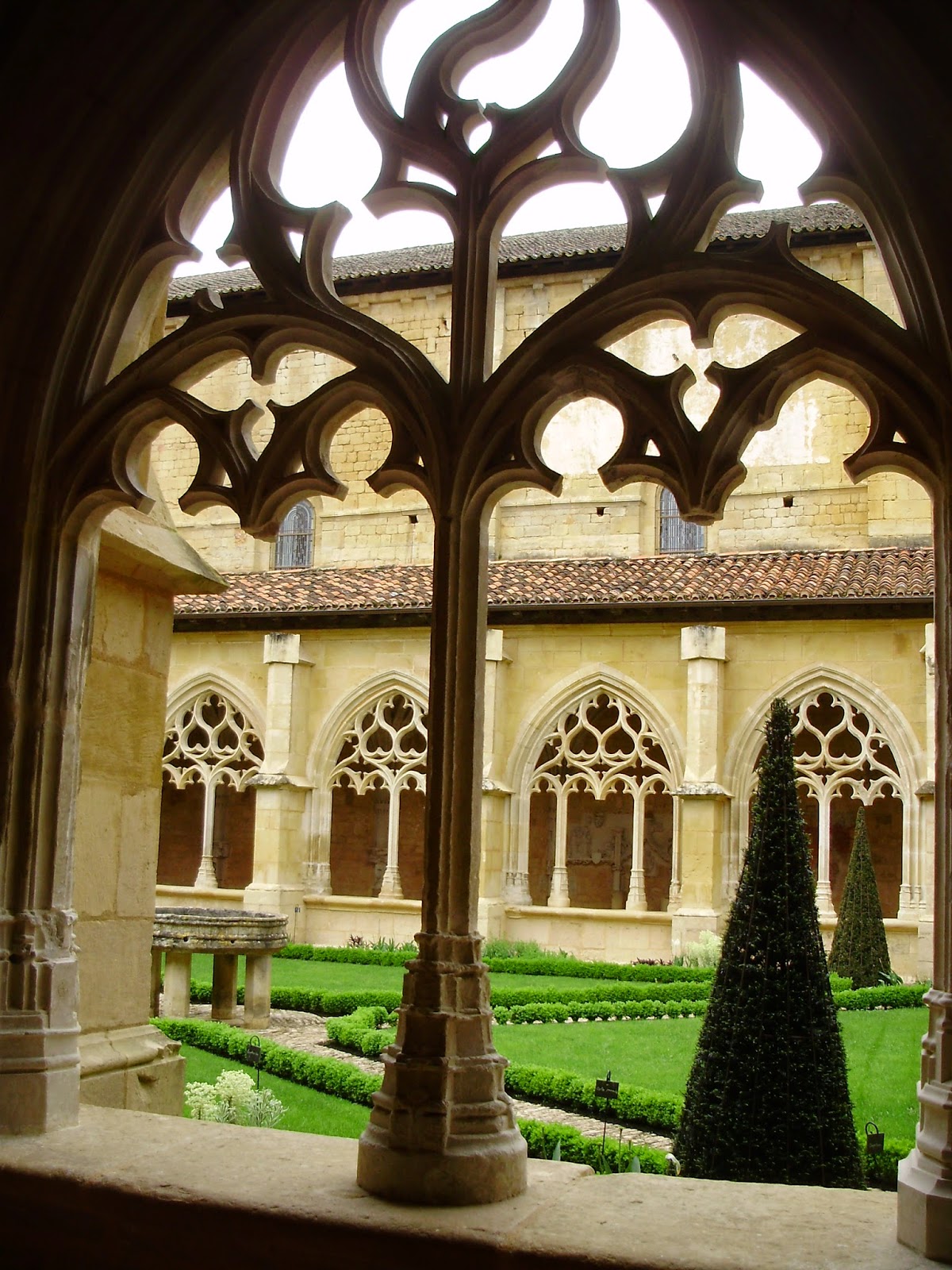 Even in the nidst of religous wars, respecting and worshipping Morther Nature was recognized by all parties as a means of ensuring the harvest happened at the expected time, as respresented in these sculptures of kale surrounding a 12th-century Abbot's throne. 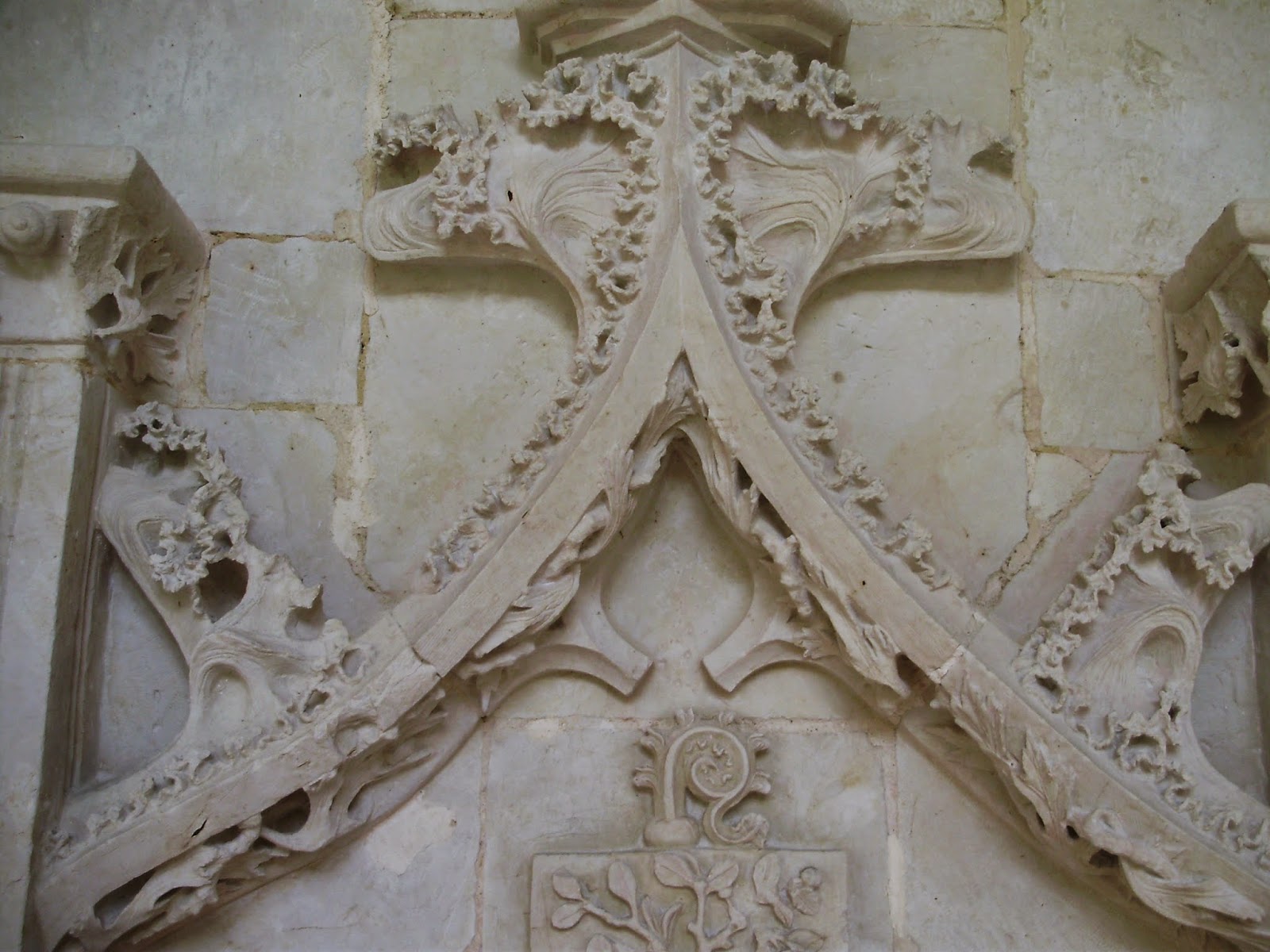 We have managed to squeeze in some castle-viewing into our busy schedule--did I mention that there is a castle on every hilltop? And one from every century, it seems. Where on earth--or under the earth--can we find the time to visit them all??!! The one below is just a routine everyday private home, once fiercley defended by the reigning lord of the manor, now falling victim to the ravages of time and thinness of wallet. 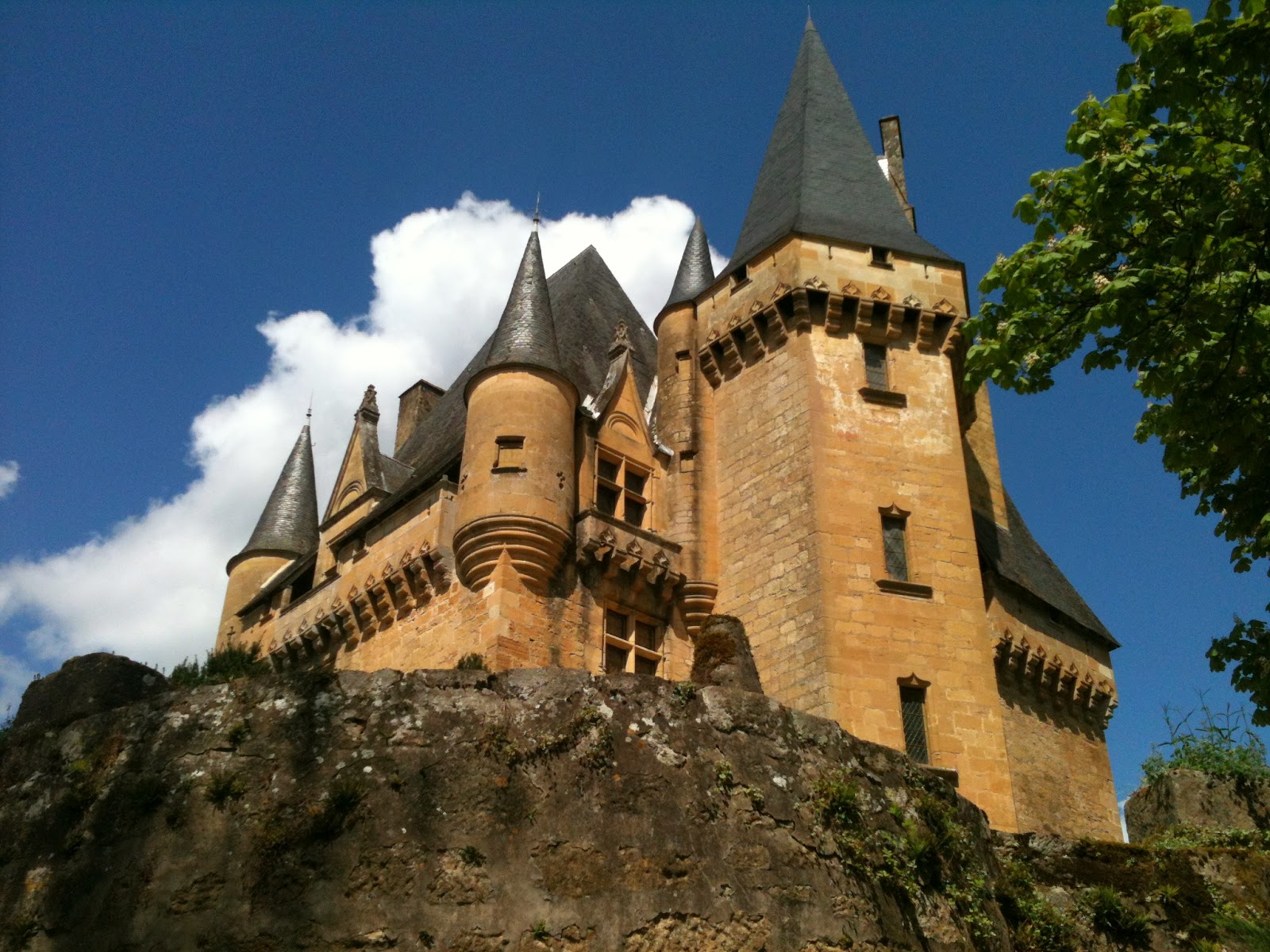 If you're lucky, or rich enough, your castle is kept up by surviving family, or perhaps a non-profit foundation after your death, or even the government's historical preservation arm. All those renovations and upgrades of electricity and plumbing take time, as evidenced by the repairs underway on nearly every structure constructed of stone. For example, at the singer Josephine Baker's proud French chateau, furnished lovingly during her successful music hall career but lost in bankruptcy as she aged, and, in its final chapter, accepting donations from tourists to pay for roof repairs. 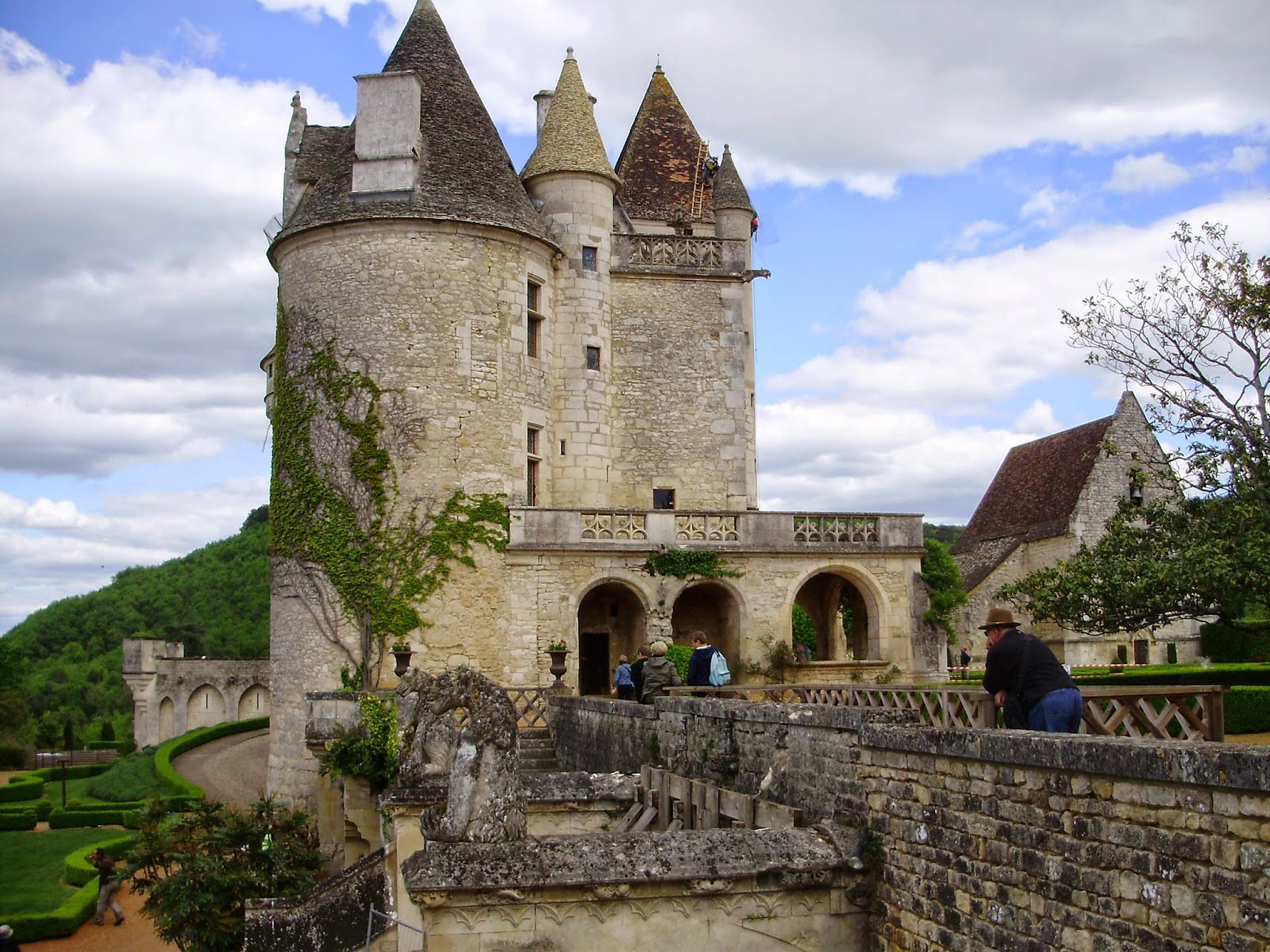 This has been a busy week, for sure, keeping up with the timeless march of history! We haven't yet made it to a walnut farm (the traditional industry here, along with foie gras production) or kayaking with champions--no time!
Posted by my alias Amber Jones Adventures at 2:51 PM