The Weather Gods Roll the Dice

The car is buried. The front steps are stacked with a billion snowflakes. We are stocked up with food and drink and ready to party, alone in our tomb...er, perhaps I mean womb. My thoughts drift to the courageous men and women who predicted all this. Until a few hours ago, a few doubts remained whether the blizzard would match expectations.

Being a TV weatherman, meteorologist, or both, must be among the most celebrated--and vilified--occupations in America. Who do we blame when scientists miscalculate and the forecast begins to look just a little bit shaky?

"Time to clear the front steps. I guess they had the prediction right for once," my partner Pope exclaimed as he glanced out the window at 4:27 pm. That's the kind of attitude that gets weather announcers in trouble!

In Washington, doubts or not, we prepared for the worst. Earlier today, as I traversed the heavily congested aisles of Safeway, I was bemused by the fact that certain shelves were emptier than others. Snack foods and hot dogs--well, that's to be expected. Soft drinks--wiped out. (Too bad, from a nutritional standpoint.) Pet food--good to know people are watching out for their four-footed friends.

Bottled water--the emptiness evoked visions of 2010's Snowmageddon. But no, to differentiate that blizzard from the impending 2016 experience, we've expanded our lexicon to predict Snowzilla (according to today's Washington Post). Which will prove to be worse? 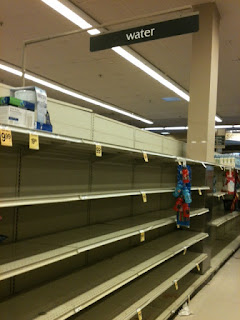 Cooking oil--not a single bottle to be found. Can we anticipate fried chicken or stir fry on every table? 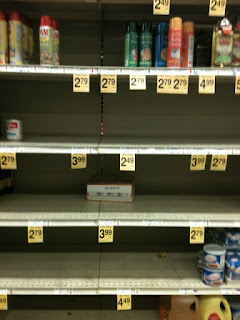 Ice cream--only a few pints remaining. Of course! Just what you need on a 20-degree day to cool your innards! (And how did they keep it from melting while they waited a half hour in line?)

Plenty of chicken, potatoes, and oranges still to go around. You know, the more nutritious stuff. Requires cleaning, peeling, and cooking.

At Yes! organic market on 8th Street, hundreds of crates of canned beans and tomatoes were delivered during the last two days. Firewood and bags of rock salt were stacked six feet high on the sidewalk. By 12:30 pm today, the line to purchase organic produce and wine wound twice around the aisles of the tiny store. 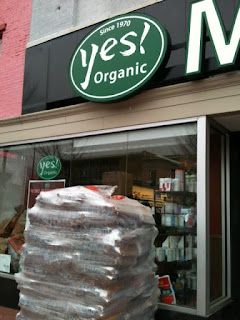 Three blocks away, traffic backed up in front of Frager's, Capitol Hill's only hardware store. So many cars circled the block, waiting to park, that even a fire engine couldn't get through. 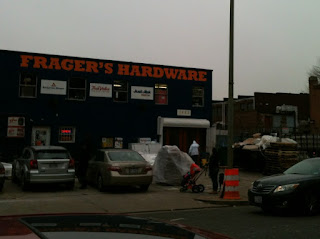 On my walk home, I pondered the apprehension that weather announcers must feel as they stock up on their own provisions and gas up the four-wheel drive for tomorrow's slog to the studio. Will the weather gods roll the dice in favor of an accurate forecast? Or, with a wink of the eye and a crinkle of a smile, will they send Al Roker and Willard Scott to sit in the corner under a dunce cap as the clouds roll away in an unexpected direction? The anticipation is deafening (as will be the applause or critique).

At 1 pm (the forecasted storm "launch" time), I frowned and tightened my grip on my bag of yogurt, grapefruit, and multi-grain bread as I anxiously scanned the sky. Not a single flake visible in the atmosphere. No blizzard to whiten my outlook. All this worry and standing in lines for ... a false alarm? Could the gods be laughing at the poor, prosecuted forecasters in Washington, DC?

Then, at precisely 1:03 pm (according to the precision digital network of cell phone technology), a single snowflake drifted from the low-hanging clouds, meandering past my eager eyes on its way to the red brick sidewalk. Boom! It landed and stuck. At 1:07 pm, its sisters, brothers, and cousins launched an all-out rush to get to the party.

By the time Pope ventured out three and a half hours later to retrieve the shovel from under the front steps, an extended family of snowflakes had converged on our sidewalk: 8 branches, distant aunts and uncles, and casual acquaintances from far-flung locations. The party had indeed begun, and it looked like it could get crowded. 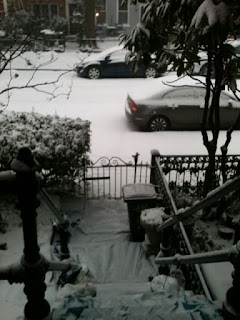 Weathermen and meteorologists, rest easy tonight. The weather gods rolled the dice and sent the blizzard you forecast. The nation will forgive the 7-minute delay in execution. Tomorrow, we will laud your foresight as the key to the thorough preparations that will ultimately mitigate the damage.

This time, you won the gamble.


Posted by my alias Amber Jones Adventures at 2:46 PM