Battling My Fears (or, It's All in the Mind)

Last night, the demons caught up with me in the half-century race. The demons of the mind.

Here's what happened: I organized a practice session with musicians whom I have invited to perform with me later this month, at a house party. I had practiced to perfection my set list of tunes--singing and accompanying myself on guitar. 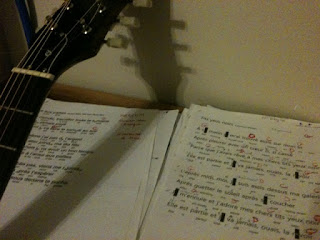 My repertoire of scribbled songsheets

Arrived at the practice, confident and bright. Began to play. And stumbled.

Clearly, I was thrown off by the presence of other people--even a couple of friends that I play with elsewhere. This time, though, it is MY performance at stake. I tried again; started over. Fingers failed to cooperate. 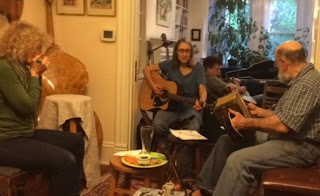 What handicap is this, that has plagued me for five decades? The fear of making mistakes. Once upon a time, it destroyed any hope of a professional music or speaking career. (Did you know I studied violin, keyboards, classical guitar, and public relations?) Because there are no second chances in speeches, or in music.

Fortunately, writing is more forgiving--you can revise until you get it right! (That's why I prefer email to phone, FYI to my friends.)

Twenty years of delivering Toastmasters speeches, leading seminars over and over ... and over ... at work, and singing and playing with a group at Cajun jams have boosted confidence. But the verdict is in: still guilty.

Somewhere in the cell signalling sequence, being in front of an audience triggers "fight or flight." My grey cells haven't entirely adapted, even to years of practice.

Beyond public speaking and music, other threats abound. Venture beyond the four walls of my room, and it's a minefield. Some errors are hard to avoid, though fortunately rare in a carefully managed existence. Such as buying a house with hidden problems. (I only did this once, fortunately.)

Others are more frequent and more tangible: Wearing a shirt inside out, or socks that don't match. Losing a wallet. Not selling a stock before it crashes. Breaking a foot by stumbling on a curb. 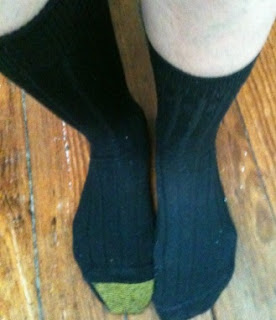 Hmm, same color but not quite right

You know I am an adventuress (hence this blog). My closest friends know also that integral to all those adventures is driving myself hard, to the point of perfection. Why? To avoid the consequences of imperfection.

Psychologists are very familiar with this phenomenon. It is deeply rooted in childhood, left over from taking a beating for getting dirty or breaking a lamp. From hearing a hundred--or a hundred thousand?--times that my nose was too big and my legs too crooked. From being banished to the corner of a classroom for talking.

Maybe it is also embedded in genes. The odds, however, favor environment over evolution.

A logical plan of action, at this stage of life, is to stop racing the demons down the path of perfection. One option is to accept the inevitability of errors and let go of letting them bother me. A second option is to acknowledge and honor my limitations: Listen instead of speaking, and turn down invitations to lead.

Hmm. That sounds attractive! And easier! And that option logically leads to a simpler, less threatening mode of music: singing and playing guitar in my room, alone. Just as I have done, successfully outpacing the demons, for half a century.
Posted by my alias Amber Jones Adventures at 5:08 AM