I Went To the Caribbean, and All I Got Was This T-Shirt

I went to the Caribbean, and all I got was a suntan, and this t-shirt. But it's a pretty blue shirt with colorful sailboats, from an exotic-sounding place--Tobago Cays. It's a place I had never heard of until a few months ago, when my partner Pope and I signed up for a sailboat cruise in the Eastern Caribbean. 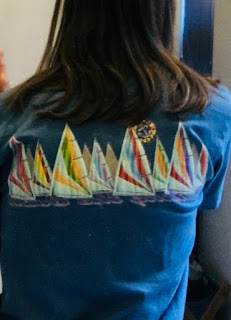 It says Tobago Cays on the front
Geography lesson: The islands we explored are at the eastern end of the Caribbean Sea where it meets the Atlantic Ocean. They are known as the Windward Islands because sailing ships following the prevailing trade winds--which blow east to west--to the New World encountered these islands first. Windward means toward the source of the wind; leeward means the opposite direction. Thus, the Windwards are east (actually southeast) of the better-known Leeward Islands, which include the U.S. Virgins (St. John, St. Thomas, etc.). They are largely volcanic. 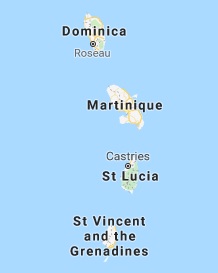 The Windward Islands
We began our journey in Martinique, where we met our Dutch captain and three other passengers aboard a 45-foot sailboat. (See previous post.) Our first stop was St. Lucia, which has its fair share of fine villas, mega-yachts, and luxury resorts (renting for a few hundred to a few thousand per night). 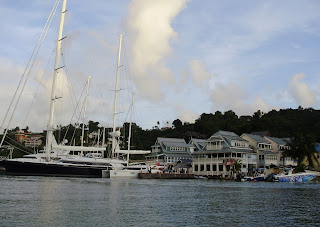 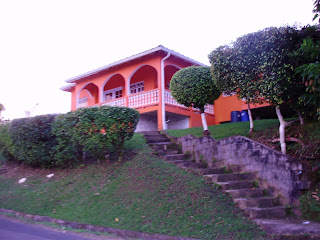 We spent the bulk of our time in the island nation of St. Vincent and the Grenadines, which has a long history of colonization and collapse, not to mention volcanic eruptions. In 1979, St. Vincent became the last of the Windward Islands to gain independence, though it still recognizes Queen Elizabeth II as its head of state. Although it's a beautiful place to swim, snorkel, and enjoy sunsets, the country is struggling with an uncertain future. Governing and keeping the economy afloat is a challenge in a water-bound country consisting of 32 islands and cays (pronounced keys, they are small, low islands or even sandbars and reefs). Poverty is widespread; health care is out of reach for many residents. 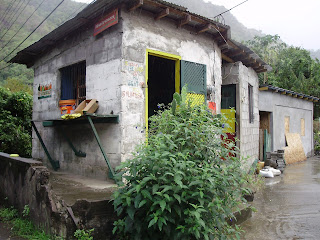 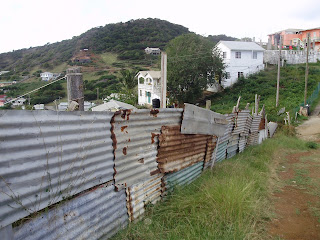 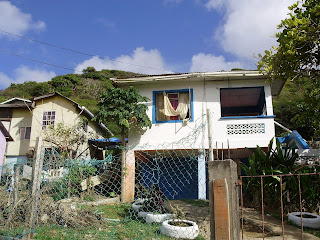 Fence and home near Clifton Harbor, Union Island, Grenadines
One of the islands, Bequia, has intrigued me for years because we were once offered an opportunity to boat-sit there for six months. Bequia boasts a smattering of leftover colonial elegance amid run-down houses, farmers' stands, and struggling 10'x10' stores. The glorious sunsets are free. 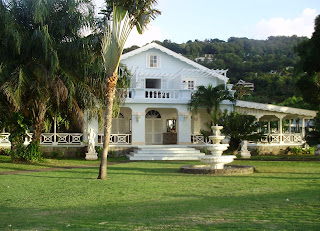 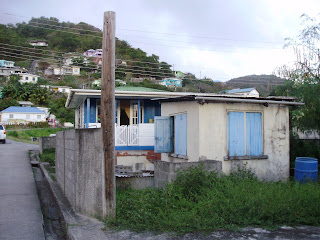 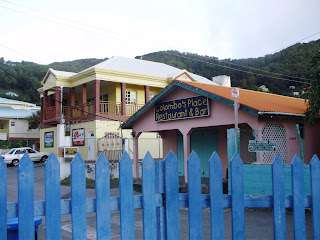 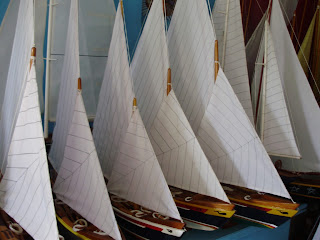 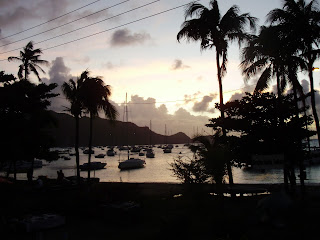 Sunsets and bathing in the sea are free for everyone
Only one island in St. Vincent and the Grenadines has emerged strong from the realm of dilapidated homesteads, polluted streams, bad roads, and downtrodden residents: Mustique, purchased by a Scottish brewery heir, cleaned up, and minimally developed for the very, very rich (think David Bowie, Mick Jagger, Princess Margaret, Kate Middletons' parents). 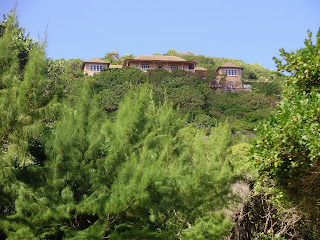 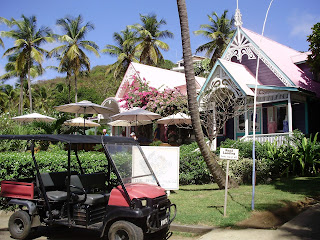 At the prettiest shops in the Windwards, you can buy lace camisoles and boutique flip-flops
Mustique is an anomaly in this Small Island Developing State (United Nations designation) reporting a 30% poverty rate and nearly 20% unemployment. Despite its woes, however, many of the islands of St. Vincent and the Grenadines are rich with natural wonders that beckon to visitors. My t-shirt came from Tobago Cays, five tiny islands--some no larger than a sandbar, surrounded by reefs, accessible only by boat. 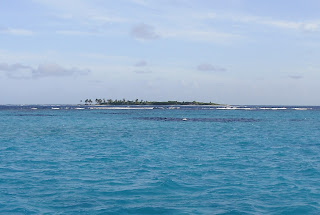 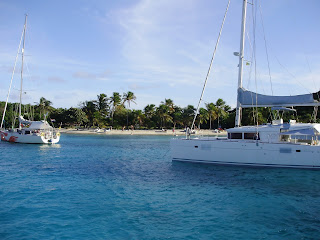 Visiting sailors flock to Tobago Cays' turtle reserve and remote beaches
At many of the economically challenged islands, enterprising citizens have found ways to make a buck. At each harbor, our "yacht"--not really, but to the locals it spelled money--was immediately surrounded by entrepreneurs in vessels ranging from beat-up kayaks to fast motorboats, hawking mooring balls, boating supplies, fruit, and fresh fish--ranging in size from the 15-inch tuna our captain bought (below) to a 3-foot barracuda. 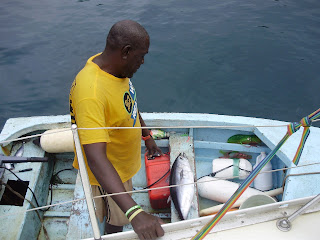 If they don't already have the fish you want, they will catch it, pronto!
In the Tobago Cays, a remote marine reserve with no infrastructure or factories, this fellow who tied his boat up to our stern pulled out stack after stack of t-shirts! In many colors and sizes! (The one he is wearing has the same design as mine.) Probably made in China; but how were they shipped (no post office or ferries)...? Where are they stored...? 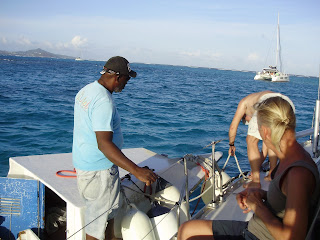 Let's tie up your boat while we try on your t-shirts
The marine reserve is a popular snorkeling spot and a primary draw; indeed, we saw a few sea turtles, though very few fish. 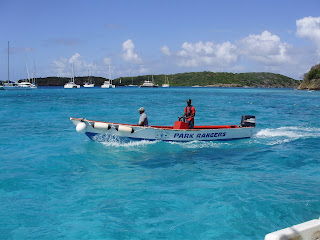 You pay the man before you swim with the turtles
The water is warm, idyllic for swimming, and very, very blue. I could gaze at it for hours, and did. Dressed in my matching blue shirt. 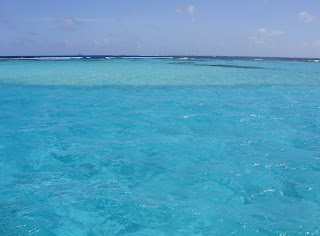 Yes, the water really is a translucent aquamarine color!

Posted by my alias Amber Jones Adventures at 2:14 PM