I have always heard that Iceland is greener than Greenland, and that the name Greenland was chosen to attract unwary settlers. 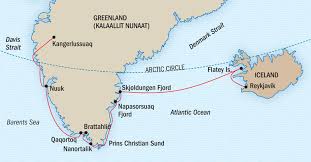 This decision—or myth, more likely-- dates to the days when Erik the Red returned from exile in Iceland, settled on the Greenland coast, and set about trying to increase the population. Maybe he wanted help with farming during the short growing season. Maybe he wanted to expand the gene pool for safely marrying off his sons and daughters in an insular island community. Or maybe he was just lonely.
On the smaller island to the east, after the Vikings moved on, the governing bodies confronted a similar desire to grow their nation through immigration (this time, perhaps, the immigration of a more peaceful population than Vikings). After all, they had a lot going for them compared with Greenland: occasional sunny days, fertile soil, abundant natural resources, easy access to the sea, and proximity to the British Isles. 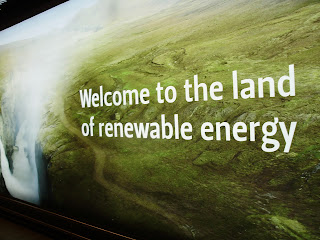 Natural geothermal sources rule the energy market, but hydro and wind are also part of the equation


Undoubtedly they considered a popular referendum to change the country’s name to something more compelling than “the land of frozen water crystals.” Such a drastic move can pose considerable political challenges. Instead, they adopted a two-pronged approach to marketing and promoting their 40,000-square-mile nation (about the size of Ohio).


The first, mildly successful, approach was to offer choice jobs with high salaries to those willing to endure the isolation and cold, dark winters in order to enjoy the more positive aspects of the island. The second, more recent approach, has been a wildly successful campaign to get people to fly Icelandair and “stop over.”

#mystopover is heavily promoted when you buy a cheap one-way ticket home from Europe on Icleandair; I bought in!


In the past few years, since the launch of #mystopover, Iceland has seen an increase in tourists from tens of thousands a year to 1.3 million this year, and a projection for next year of more than 2 million. The locals hope that some of them will stay, in order to increase the prospects of being able to marry someone who is not your cousin. (DNA tests for such genealogical purposes are popular in Iceland.)

I was one of the gullible tourists taken in by the attractive stopover terms: instead of just changing planes, no additional airfare to stay in the country for up to 7 days. Frequent bus service to the capital of Reykjavik. Hot springs and thermal pools. Enticing tours to places like the Blue Lagoon, Golden Circle geysers and waterfalls, and a man-made tunnel inside a glacier. Museums covering every subject from Viking longhouses to volcanoes to male private parts. 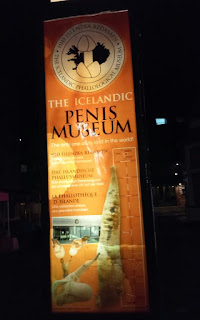 Seen on the streets of downtown Reykjavik. How many tourists brave it? “Honey, I’m leaving the hotel for a short while. Don’t ask me where I’m going.” 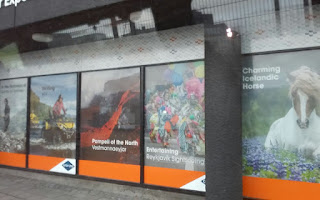 One of the many billboards touting the more mundane wonders of the island nation: volcanoes, caves, geysers, wild horses


Even the food is an attraction. (Was this always true, or is it part of the tourist campaign?) Fish and chips on every corner made with fresh (instead of frozen) cod. Gourmet six-course meals for under $100. And—I didn’t know this in advance, and this alone might be worth the stopover--scrumptious pastries and candies made with cream, butter, caramel, and licorice. 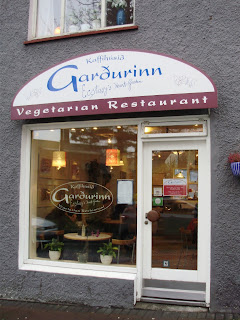 ﻿
Yum! This small vegetarian café featured entrees such as almond “meat” loaf for less than $20, and the best, most scrumptious caramel cake I have ever had in my life! Open only for lunch. 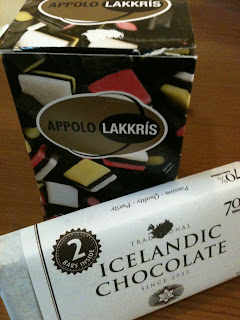 
The terms turned out to be a little more challenging than I imagined. Prices were higher than what I pay in Paris, London, New York, or San Francisco--$70 bunk bed in a hostel dorm with shared bath, $30-45 dinner entrees at even modest restaurants, and cold, rainy, cloudy, foggy, windy days in early November that prevent outdoor activities unless you pack heavy woolies and a robust, 100% waterproof Arctic parka or are willing to part with a few hundred dollars (tens of thousands of Icelandic kroner) to buy one. 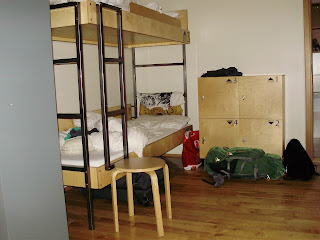 ﻿
Higher-than-usual prices for the privilege of being woken up at 3am when the bars close, and sharing shower drain hair! 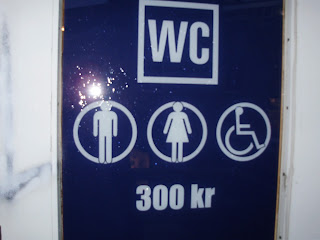 Even a public bathroom costs almost $3.00 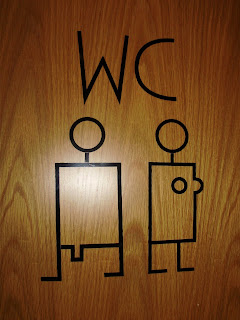 I prefer these restroom signs, so much more descriptive than the standard ones. How many women still wear a knee-length dress, or any dress?


The days were dim, and I shivered down to my toes in my light down jacket and acrylic ski cap and gloves. I bought a $5 loaf of bread and $10 chunk of cheese and cooked grilled cheese sandwiches and oatmeal in the hostel kitchen. I stayed in the city of Reykjavik and (past of forgo) hiking on glaciers and volcano rims. There was plenty to do in town, however: museums, dozens of woolens shops, craft shows, churches, movie and concerts, and a city walking tour to learn more about why the founding fathers settled on that particular knoll on the southwest coast. Supposedly, the first settler, Ingulfor Arnarson, threw two wooden pillars off his ship and pledged to settle where the pillars floated ashore. 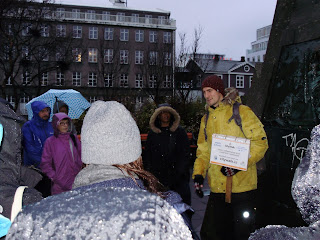 Martin, our intrepid guide from www.citywalk.is, seemed impervious to the cold hard rain in his Arctic parka and woolly cap 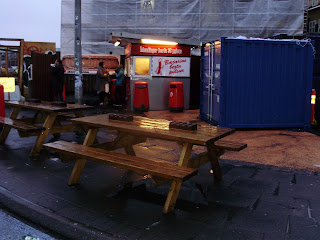 
Houses are almost uniformly wood frame covered in corrugated steel, for long-lasting resistance to the elements. 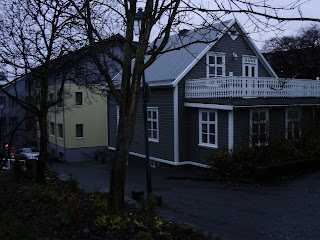 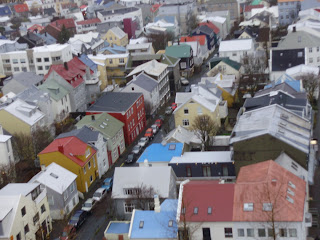 Not all of the houses and apartment buildings were in great shape and painted in bright colors, but the ones that were—mostly in the downtown area--made a pretty picture


The salaries might be attractive, but the weather is an endurance contest. Ironically, on the bus ride to the airport, the clouds parted just long enough to reveal snowy mountains surrounding Reykjavik. From what I had seen on the bus from the airport, I had thought that Iceland was flat, barren, and rocky! It is indeed barren, according to my city tour guide—after Vikings raped the forests for ships, the remaining trees were consumed for houses and fuel, including making charcoal. 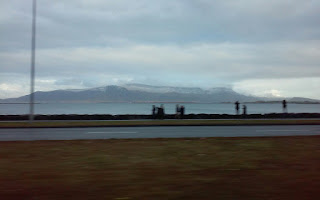 From the bus to the airport, I caught a very brief glimpse of the mountains you might be able to see—and climb—if you stop over in Iceland in the summer 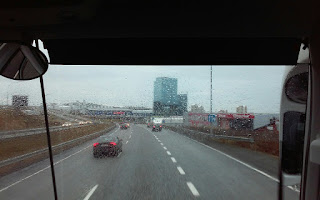 Then the rain resumed


At least the airport is artsy and attractive. And the duty-free is second to none. I dropped a few thousand kroner there—about $30—on the superb Icelandic chocolate and licorice. Something to munch and reflect on during warm sunny days in the southern US this winter. 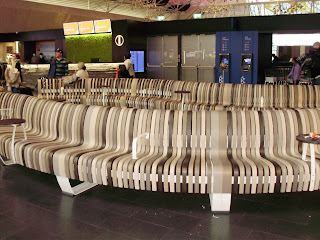 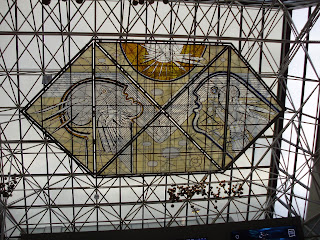 Feast for the eyes--and the taste buds--at Keflavik international airport, about 45 minutes outside of the capital city 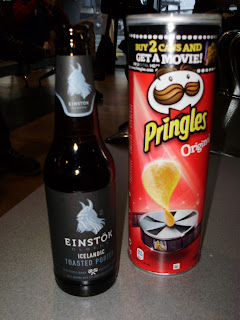 For sale next to my departure gate: sandwiches, a truly excellent “toasted porter,” and Pringles (which are almost as popular in Iceland as hot dogs!)

Posted by my alias Amber Jones Adventures at 6:43 AM